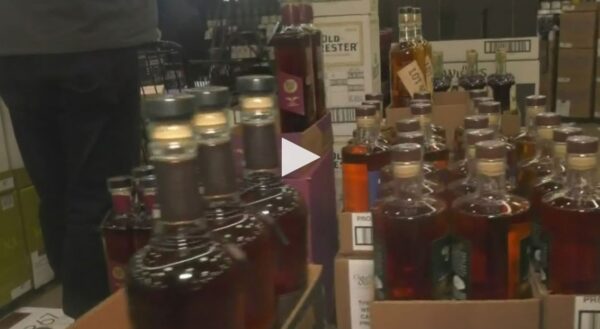 VANCOUVER – Hundreds of people converged at the BC Liquor Store on Cambie Street in Vancouver Saturday for a chance to purchase rare spirits that aren’t typically available for most of the year.

BC Liquor Stores’ annual spirits release offers “something for everybody,” according to Adele Shaw, spirits category manager for the provincial liquor chain.

This year, more than 180 products – including whiskies, rums and liqueurs – are available.

The crown jewel of the offering is an extremely rare – and extremely expensive – collection of Dalmore Scotch whisky.

The Dalmore Decades collection is one of only 25 sets available in the world and retails for $200,000. It features four whiskies from the Dalmore distillery, the youngest of which was bottled in 2000.

“It’s the most expensive set we’ve ever had,” said Shaw. “We’re the only province who got it and the only retailer in all of North America to have that product.”

As it has done with other rare whiskies in the past, BC Liquor Stores held a lottery to determine who would have the opportunity to shell out roughly three times Vancouver’s median household income in a single purchase.

A total of 120 people applied to participate in the lottery.

Not all of the products released Saturday will break the bank, however. Shaw said the fun of the annual spirits release, for many, is the variety of products on offer.

“The really sought-after stuff” will be gone before the end of the day, she said, but unusual and interesting items will be available throughout the weekend.

The self-described “whisky sissy” said he likes scotches that have “lighter” flavours, rather than the strong, smokey flavours some varieties of the spirit are known for.

“A lot of that you just can’t find during the regular season, so you wait for your whisky Christmas, which is today,” Gamble said.