A LITTLE LONG, BUT A WONDERFUL READ THAT BRINGS BACK MEMORIES OF LONG LOST FRIENDS

AND SCENARIOS OF YESTERYEAR  !!

Origins of the Colombo Music Scene – Reflections over 50 Years

This has been quite an eventful year for Sri Lankan Music.

On the plus side, Sri Lankan Rap artist Yohani gained global recognition this year for her cover of “Manike Mage Hithe”. On the flip side, famed singer Sunil Perera, a true veteran of the Sri Lankan music industry and a much-loved figure among artistes and fans alike, passed away with Covid related complications. Sunil Perera and his brothers were part of the ‘Gypsies’, a group that had their first hit song “Linda Langa Sangamaya” in 1972.

These two events motivated me to reflect on the entertainment scene in the first half of the 1970s, about 50 years ago – when the youth of Colombo were second to none in the music revolution taking place globally.

Prior to 1970, Sri Lankan artists were inspired by great international acts of the day. The big-band sounds of the Glenn Miller orchestra and Pepe Jaramillo gave rise to local bands such as the Harold Seneviratne Combo, Peter Prins, the Esquire Set and Sam the Man.

However, it was arguably the formation of the Jetliners, inspired by Elvis, Cliff and the Shadows, that really took Sri Lankan Western music to another level. The Jetliners started initially as an instrumental group in line with the Shadows in 1961. The original line-up was Lucien Perera (Lead) Félix Fernando (Bass) Anton Gunawijeya (Rhythm) and Harris Jurangpathy (Drums). The first male vocalist was Ishan Bahar with a female vocalist Wilma Squirling on some gigs.

However, it was in 1965, when Mignonne Ratnam joined the group, that the Jetliners became a major force in the local music scene. Radio Ceylon introduced her music not only to a local audience but across South Asia. During the early years of the group, the Jetliners enjoyed star billing at the Coconut Grove nightclub situated in the Galle Face Hotel in Colombo. In 1969, Mignonne became the first Sri Lankan to be signed up by EMI Records UK, and KPM London which released ‘Mangala Mohotha’.

The Jetliners have had other singers, both male and female joining Mignonne on stage: Loretta Koch, Sohan Pieris, Conrad de Silva, Desmond de Silva and Alston Koch to name a few. These vocalists often joined rival bands that followed the Jetliners such as the Spitfires and Gabo and the Breakaways.

By 1970 the live band, or ‘groups’ as they were then called, were often performing in night clubs such as the ‘Coconut Grove’ and the ‘Mascarilla’; and at Hotel dances especially on New Year’s Eve. The only mood-lighting was some stationary-coloured spotlights aimed at a ‘mirror-ball’ that slowly turned.

These groups also did ‘beat shows’ for teenagers at school halls and other public venues. These were essentially stage performances with very little atmosphere except for the pulsating music. The stage was lit with some basic lighting, and the audience was kept in the dark.

All that changed with the introduction of the first-ever ‘Discotheque’ in Sri Lanka in 1970. This was organised by two cousins, Janek and Kavan Ratnatunga under the auspices of the Royal College Interact Club. This was a unique event. It was all about music and lighting, with strobes, ultra-violets and lights that danced to the music. The participants had to take their shoes off at the entrance and sit on mats and cushions. There were hundreds of slogans in ultra-violet paint hanging from the rafters. From memory, there was a pungent weedy aroma that wafted around the dance floor! 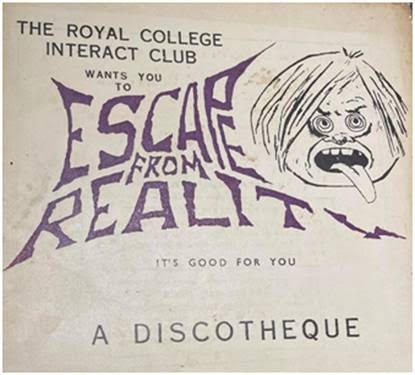 Cover of Escape from Reality Souvenir

This is what the Observer carried as a review of the Discotheque.

Groovy at Wendt (by Kenneth – The Pop Scene)

“Congratulations to the boys of Royal College Interact Club for a very good effort that helped them to raise as much as Rs 4,000 for flood relief work. We are referring to “Escape From Reality”, the groovy discotheque that took place last week at the Lionel Wendt Art Gallery.

Jointly organised by co-chairmen Janek and Kavan Ratnatunga the discotheque proved quite a success with those turned up for the ‘happening crowd of modsters who were in their glad rags’”!

Rhythms hot and sizzling were served up by the Rolling Stones, The Cream, The Beatles, The Soul Finders, The Ventures, Tom Jones, Bob Dylan, Wilson Pickett and a host of others. There was also a session of excerpts from the hippy musical ‘Hair’”.

The Interact Club of Colombo

A year later, in 1971, many from the Royal College Interact club went on the form the Colombo Interact Club. This time the club was also open to those from other schools – including girls from leading schools in Colombo. This interested me greatly, and I joined – along with Thomains, Peterites and other Josephians like me. The girls were from Visakha, Ladies, Bishops, HFC and St. Bridget’s.

At the Colombo Interact Club the two Ratnatunga cousins, Janek and Kavan, went on to organise ‘CLIMAX 71’ the first Ceylonese ‘Beatcotheque’ exactly 50-years ago on November 1, 1971. A ‘Beatcotheque’ was a unique concept, probably the first of its kind in the world. Essentially, a kaleidoscope of lights was not only aimed at the stage, but also on the audience. 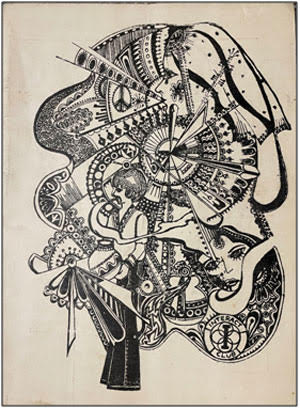 These are excerpts from some of the reviews a week after in the newspapers:

Beatcotheque – Straight out of” Woodstock” (A review by Robert Crusz)

Perhaps the most memorable part of Climax 71 was its audience. It was a treat to watch all those youngsters pouring into the Navarangahala, excitingly clad, from the definitely outrageous to the decidedly elegant.

There were guys straight out of “Woodstock” with heads swathed in bandages and the rest of the body lost in a mass of multi colour plastic, leather and silk

At the other extreme were the girls, some of whom looked chic and elegant in their maxi’s with that ice look we see more often in “Vogue”.

They were chilling yet thrilling! What was most satisfying was the enthusiasm and exuberance of these youngsters?

They participated in the beatcotheque with vigour. They were there to have fun and they had it.

The Navarangahala was transformed into something out of his world. Incense enshrouded the spacious hall. Lights of every shade blinked and flashed. Ultraviolet rays pierced the atmosphere, bringing out the white – the pure, Music! Hard rock – with its vibrating rhythms and variations glorified the buoyancy of youth and life under the expert manipulation of the two very popular groups Sri Lanka’s own “Gabo and the Breakaways and the “Spitfires”.

Above all, there were the kids – the youth, ornamented with breath-taking clothes of all types. Bringing out their individualities and dreams but all signifying a craving and passion of the world that is not- the neo-age, away from the world which not wanting to pulsate with today’s youth fails to bridge the gap between youth and age. While the elders themselves fall into a chasm of hopeless, needless wars – be they cold or bloody…

And at the height of “Climax” when the Spitfires began one of the “hymns” from Woodstock and invited the moved audience to really participate by going up to the stage and doing whatever they wanted, they came……

From all sides they trooped, leaving their elevated seas. Their hands stretched high above their heads, their bodies straight and tall and with such a depth of feeling and emotion in their young faces. Down, down, down to participate to their fullest, their souls, their inner selves.

Everyone was brother and sister, where the music spoke to their own world, their ambitions, their dreams. A world which spoke of victory over war, misery and grief about which they understood and shared with the others of their own, the youth.

Bravo Interact Club of Colombo who moulded this happening in a truly soul stirring and meaningful one.

The lights- the true stars of the night – Ultra-Violets, Light Machines, Colour Organs, Stroboscopes and multiple mirror balls- were provided by Mahinda Dias and Lal Wickremesinghe.

The Interact Club girls provided their own local brand of ‘Smoke Machines’ by running up and down the aisles with ‘katta-kumanjal’. The dancing lights pieced the heavy smoke. It was an eerie atmosphere.

After the ‘Beatcotheque, the music scene kept on evolving, where the ‘show’ became an entire production. Kumar Navaratnam started organising of rock music festivals at Havelock Park. The ‘Jaycee Show’ became a fixture of the Colombo music circuit where many a band were given their first gig.

One of the noteworthy groups that emerged at the time was the ‘Savages’, a group inspired by the likes of the Rolling Stones and Jimi Hendrix. Their line-up was: Raj Seneviratne, Evan Balasuriya, Mohan Wimalasuriya, Mohan Sabaratnam, Calvin van Granberg, Suriyakumar Veerasingham and Elmo Wijesundara. Another group that hit the highlights at the time was ‘Amazing Grace’ with Reza Deane, Tony de Silva, Joey Lewis, Donald Peiris and Benji Ranabahu. They played mainly at the ‘Little Hut’. Other popular groups at the time were the ‘Buggs’, ‘Shorty and the Tall Boys’ and an all-girl band ‘The Speed Jets’, with Sudasha, Dharshini and Marnique.

The Colombo Interact club went on to produce Sri Lanka’s first original rock opera “Life!” with members Nimal Gunawardena and Salinda Perera directing. Many members, including myself, practiced many a night to master the crazy movements that were required on stage. In 1975, the club produced “Jesus Christ Superstar” with a stellar cast including Amazing Grace.

Today, 50-years later, a number of the original Interact club members have risen to the highest positions in academia, the professions, business enterprises and journalism. Some have run companies that are household names such as Mobitel, Metropolitan and Stassens. Many of the “girls” have gone to university and/or have qualified in the professions; and have held senior appointments in international agencies. Nimal Gunawardena went on to use his creative flair in the advertising industry. Salinda Perera lives in Hollywood and produced and directed the acclaimed art house movie, “Dheevari” (Fisherman’s Daughter).

In contrast, the two Ratnatunga cousins, Janek and Kavan, who gave Sri Lanka its first ‘Discotheque’ and ‘Beatcotheque’ have had quite a career change. Both became Professors, one in Finance and the other in Astrophysics, in leading universities in Australia and the USA. I am sure their students will get quite a shock to visualise them with their heads swathed in bandages, in flower-shirts and with bare feet!

About the author: Ajit Jayetileke was a Senior Prefect at St. Joseph’s College when he joined as a founder member of the Interact Club of Colombo. His Interact experience prompted him to be the Founder President of the Wellawatte Jaycees.