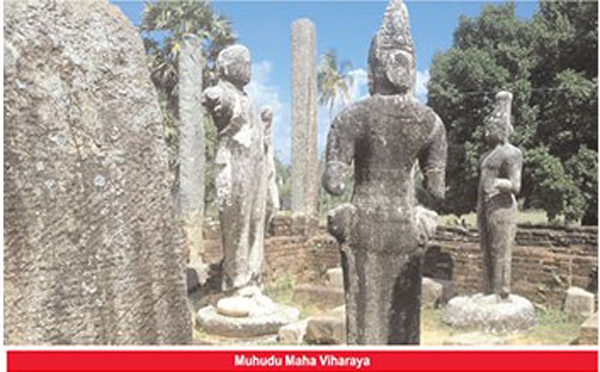 In this time of uncertainty the preservation of the Vihara Maha Devi archaeological site has called for a weighty and important landmark decision from our leaders.

Volatile times that we experience now may be called the worst of times and paradoxically the best of times.

The time has arrived for political leaders with verve to sideline the oddballs who graced (perhaps disgraced) our hallowed chambers. In the new political landscape the central defining characteristic is rationality, where science and discipline has taken centre stage. Politics has become a vocation, a calling, suitable only to those with vision, sagacity and character. The obsessional neurotic character of our nation, which fluctuated between confidence and anxiety at the best of times, has been yearning for this moment to arrive. Unfortunately that arrived not with independence or any time since. It was forced on us in the form of a plague.

It is believed that crises bring out the best in political leadership. Because in such times politicians become serious, out of necessity, but unfortunately as T.S Eliot lamented ‘humankind cannot bear very much reality’ for far too long. We were taught a bitter lesson by a microorganism and now we cannot bear the burden of uncertainty. Maybe, this burden of uncertainty will not go away soon, and we will have to live with it as best as we can. We will come through if astute political leadership will run the country in these troubled times, with assistance from science. Uneasy lies the head that wears the Crown and so be it. Bureaucracy will execute but not decide, because in the past bureaucracy was unsuccessful in decision making, let alone challenging the absurd policy decisions that impacted us so badly. That chapter in civics and government is laid to rest.

The decision to save the Pottuvil temple reminds us that the good side of our civilizational past is fighting back, sensing a political leadership able to manage the whirlwind of destructive politics. In these pretentious times we should strive to appreciate that effort in awed esteem. Even an illusion of order and discipline is better than uncertainty and chaos. Any Sri Lankan enthusiast in its historical past will appreciate the efforts taken, even by colonial British Governors in the late nineteenth century, to set up a Museum in Colombo because they believed that Ceylon, ‘though a small country, its people have a claim to a remarkable history dating to about 400 B.C., and to a glorious civilization nurtured and tended by Buddhism’. The correspondence between Sir William Gregory to Sir Thomas Huxley to obtain the services of a renowned scientist to head the Ceylon Museum shows the preciousness of our archaeological heritage. From Dr A. Haly as the first Director in 1876, to a succession of distinguished scientists we are grateful for the preservation of arts and antiquities of Ancient Ceylon. The carvings, paintings, and sculpture found on sites such as Muhudu Maha Viharaya demonstrate the artistic uniqueness of our glorious past. The magnificent Buddha Statue that adorns the entrance hall at the Colombo Museum, the two heads of Bodhisatvas, standing Buddha from Tissamaharamaya, the Hindu Durga from Polonnaruwa and numerous bricks, tiles and monuments speak volumes for the preservation of sites scattered throughout the Eastern Province. The sites that hold remnants of those times must be protected from vandals at whatever cost. That Bamiyan statues of Afghanistan can never be seen on this earth is a lesson to all humanity. We should never sell the heritage, common to all Sri Lankans, to a pottage of a few votes to benefit egoistic megalomaniacs.

Archaeological sites like Vihara Maha Devi precinct will fill the gaps in our museums in the future. They will encourage expeditions by future archaeologists, and enthusiastic university students. A field trip to this site led by a modern day Senarath Paranavithana will be a gift from heaven to any budding archaeologist. Excavations will bring us new knowledge of our prehistory, palaeontology, anthropology and the arts and antiquities of a proud narrative. The sites pertaining to our cultural history, visual arts, folk culture, are evidence to the living and the extinct life of antiquity that has only few parallels in the world. The decorated pillars and bricks strewn in the Vihara Maha Devi land, desecrated by some using them as front-end stepping-stones to houses and huts is wanton destruction allowed by politicians and vainglorious archaeological guardians. If those who are entrusted to keep these treasures cannot guard them, and if the state policy enacted in legislation cannot be executed with the power entrusted to them, they should resign.