Upper Uva spreads out from the mountains of Idalgashinna, Ohiya and the Horton Plains, the peaks of Hakgala and to the cone of Namunukula and Poonagala

Haputale, as a destination in Uva Province, has enormous attractions to cover as a traveller. Last week, in the Daily Mirror Travel, we published the most sought-after Water Falls in the District of Badulla. Today, we look deep into the colonial city of Haputale, which is one of the favourite destinations of the Province. With the elevation of 1431 m (4695 ft) above the sea level, Haputale has a rich bio-diversity dense with numerous varieties of flora and fauna. Haputale is surrounded by hills covered with cloud forests and tea plantations.

Perched at the southern edge of the Hill Country, the plantation community in Haputale clings to a long, narrow mountain ridge with the land falling away steeply on both sides. On a clear day travelleres could observe the south coast from this ridge, and at night the Hambantota lighthouse pulses in the distance. On a not-so-clear day, great swaths of mist cling magnetically to the hillsides. Either way, it’s one of the most spectacular fragments of the Uva Province.

The town centre itself is a dusty ribbon of traffic, three-wheelers and small-scale commerce. But take a short walk and you’ll be rewarded with extraordinary views. The railway hugs one side of the ridge creating a part of the victory for 19th-century engineering.

In recent years Haputale’s popularity with tourists seems to have mysteriously diminished, but the town has an array of good, cheap accommodation and makes an excellent base for visiting Horton Plains National Park, exploring other places in the area or just taking pleasant walks in cool mountain air. It also has a more authentic Sri Lankan air to it than that of nearby Ella. It is the base camp for travellers to Horton Plains via Ohiya or Non-perriyal Estate.

Haputale Gap is one of the most spectacular views in the country. The great amphitheatre of the upper Uva spreads out to the north and east. It is bounded by the mountains of Idalgashinna, Ohiya and the Horton Plains National Park, the peaks of Hakgala Mountains, the purple cone of Namunukula, Poonagala and Nuwara Eliya. The other side is equally breathtaking. The views of the foothills of the lower Uva, the south of Sabaragamuwa followed up Southern Province right down to the sea. A little distance off the town, some of the tea plantations are geared to welcome the tourists.

The colonial heritage of Ceylon is brought to life by St. Andrew’s, neo-gothic church located just north of the town along the main road Haputale- Bandarawela. The graveyard of the church takes solace in providing the final resting places to the illustrious British tea planters.

East of Haputale, a 10 km scenic road along the edge of the escarpment through beautiful rambling tea estates leads travellers to legendary Dambatenna Tea Factory, built in 1890 by Sir Thomas Lipton, the tea magnate whose name is immortalised in Lipton’s Tea. The colonial Dambatenne Tea Factory brings in an unmistakable message of philanthropy in addition to the efficient industry: the workers’ quarters of the famous factory accommodates over 4,000 people; the 20,000 sq ft factory employee 1,600 workers. At the entrance is a quote from John Ruskin: ‘Quality is no accident. It is the result of intelligent effort’.

In spite of the on-going modernisation, some of the machinery of the colonial era is still in operation in this ISO certified factory. 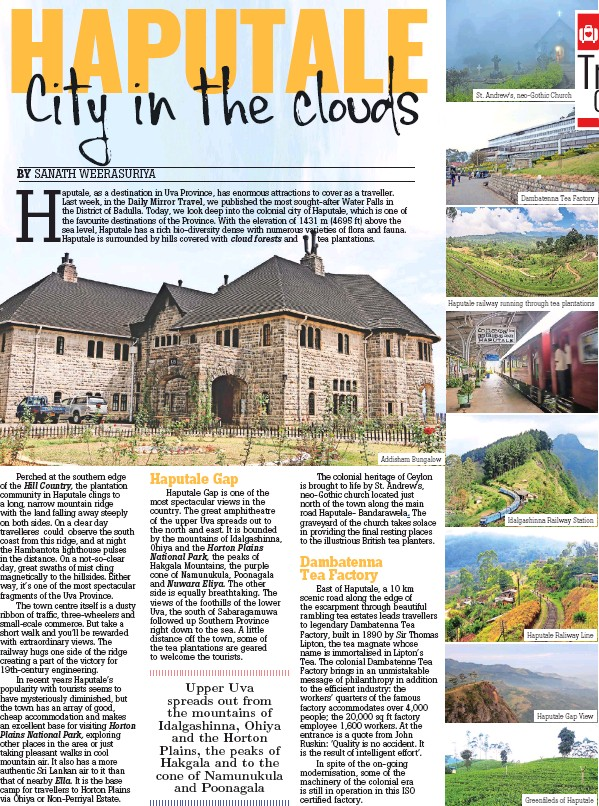