A new species of the genus Ceratophora (horn-lizards) found in the Salgala forest in the Kegalle district in the northern part of the wet bioclimatic zone, has been named to honour a renowned scientist in Sri Lanka. The species, which is new to science, has been named Ceratophora ukuwelai sp. Nov., in honour of Dr. Kanishka Ukuwela for his remarkable contribution to science here and South Asian herpetofauna.

Ceratophora ukuwelai is an elusive species known to exist only in the Salagala forest in Kegalle district. Considering rapid habitat destruction in the area, experts have recommended the species be listed as Critically Endangered (CR) following IUCN criteria. 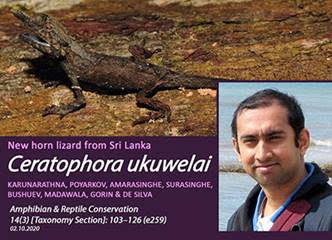 Horn-lizards comprise six species, all of which are endemic to Sri Lanka. The new species most closely resembles Ceratophora aspera Günther, 1864, but can be distinguished by its body proportions.

Scientist Ranjan Karunarathna told The Sunday Island that their analysis demonstrated that the Salgala population is indeed a new species sister to C. aspera, but these lineages have diverged a long time ago, most likely since the late Miocene, which is much earlier than the split between C. stoddartii and C. erdeleni, for example. This divergence is concordant with differences in body proportions and scalation.

Nikolay A. Poyarkov says during the evolution of Sri Lankan agamids the rostral horn suddenly appeared or disappeared in certain lineages, and the drivers behind this saltorial evolution are still poorly understood.