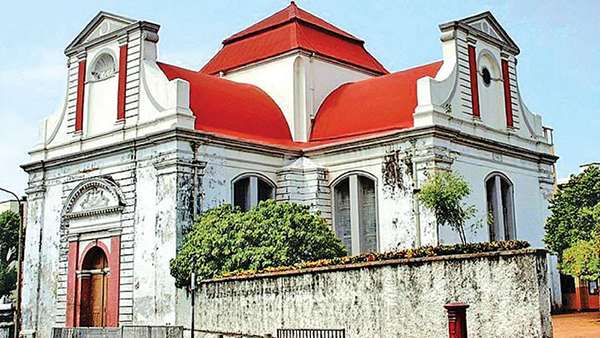 The city of Colombo is being beautifully transformed. Every city has its unique history which in turn is reflected in its architecture. Ceylon was once the dominion of 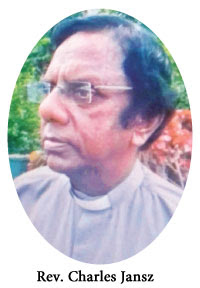 the Portuguese, Dutch and British. As we pause to look at our commercial capital we don’t see much of the Portuguese influence, in terms of visible architecture. However, the inspirations from Dutch and British designs still dominate some buildings. In this narrative, I share my observations on the last remaining Dutch edifices and monuments. It is important that we appreciate the rich heritage of Colombo city.

Towering majestically above other buildings with her red dome, on Vivekananda Hill (Colombo 13) is the Wolvendaal Church which belongs to the Dutch Reformed Church in Sri Lanka (subsequently changed to Christian Reformed Church). The Portuguese clergy had initially built a small chapel on this hill, where the Dutch church stands today. During this era there were jackals roaming in the marshlands. The Portuguese were misled that they were wolves and called the hill ‘Agoa de 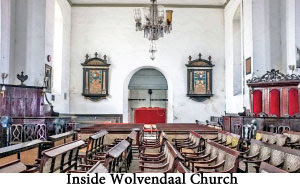 Loupe’ which translated as ‘dale of wolves’. It shows how wild this area was centuries ago.

By October 1655 the Dutch wanted to capture Colombo. The challenge of breaking down the Portuguese defence was assigned to General Gerard Hulft. He had sailed to Negombo with a fleet of 11 ships and 1,120 soldiers. He laid siege on the Colombo Fort. The Dutch attacked with zeal forcing the Portuguese garrison to surrender. The Dutch visited the ‘dale of wolves’ in 1749. The Dutch called the area Wolvendaal – meaning Valley of Wolves. According to church history, the first Dutch missionary to arrive in Ceylon was Phillipus Baldaeus. According to Rev. Charles Jansz, the senior clergyman of the Christian Reformed Church, the Dutch Governor and representatives of the Dutch East Indies Company had selected this hill to build their church in 1749.

The new church built in the Doric style of architecture was consecrated on March 6, 1757. As we walked inside the church I realized the edifice was more like a fortress, due to its thick walls. The Dutch permitted prisoners to attend church on Sunday. It is believed that there was a tunnel from the harbour that led to some point inside the church garden. The prisoners were brought via the tunnel and given the chance to sit in the church. The pipes of an old pipe organ still remain intact. Very few churches in Sri Lanka have this unique organ. The church also has a fascinating story behind its chandelier.

Centuries ago a Dutch girl had been engaged to a man. However, the man had decided to cancel their wedding. The girl was hurt and sought legal redress. The court ordered the man to pay her 50 pounds in compensation. The jubilant girl took the money and gifted the church with this glass chandelier. The baptism font has another touching story. A former Governor named Rijckloff van Goens had gifted this when his daughter Esther Ceylonia received communion. The girl’s second name was a reflection of her birth in Ceylon. The heavy wooden font was chiseled out of a single tamarind tree from Jaffna. There are many gravestones inside and outside this large church. 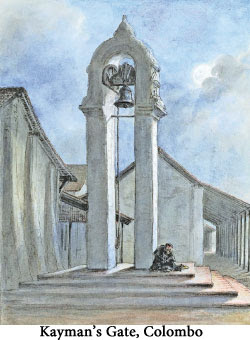 Colombo 11 is another crowded part of the city with the vibrant bazaar in Pettah. When you reach the end of Main Street, at the crossroad to 4th Cross Street, there is a solitary bell tower. This monument stands like a Dutch sentinel. The Colombo Fort was built by the Portuguese in 1554 as a fortified trading post. It was captured by the Dutch in 1656. Thus the term “Fort” in Colombo is actually derived from the existence of a real fort. Under the Portuguese, the fort’s primary entrance at the eastern rampart was Poorta Reinha (meaning Queen’s Gate), a large tunnel guarded by a drawbridge and moat.

A moat was a common feature in defensive architecture and a similar moat can be seen at the Star Fort in Matara. Kayman’s Gate derives from the Dutch word Kaaiman, meaning crocodile. During that period Mugger crocodiles were found in the Beira Lake. The lake was originally built to provide protection to the Colombo Fort. This and many other parts of old Colombo are immortalized in Sunil Edirisinghe’s melodious song “Selessina” about a convoy of bullock carts entering old Colombo. In this song, the lead carter asks Selessina, a girl said to be even more beautiful than Queen Victoria, to wait by Kaymans Gate until he arrives. 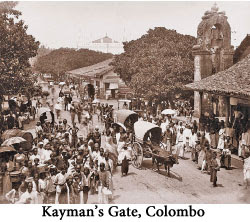 After the Dutch captured the lake, it was expanded and several islands created such as Slave Island. The African slaves from Goa, India, worked in Dutch houses during the day and by nightfall were gathered and brought to the island to sleep. The British took control of the Beira waterway, removed the dangerous crocodiles and developed the area for recreational activities. It is believed that by 1870, the Colombo Fort and its formidable defences were demolished. The Kayman’s Gate bell dates back to the 16th Century, where it originally hung in a Portuguese Church dedicated to Saint Francis, in the Kingdom of Kotte. Subsequently, Kotte was abandoned and the Dutch found a bell amidst the ruins of the church. This bell was relocated and fixed at Kayman’s Gate, where it was rung to proclaim the closing of the Fort’s main gate at night. 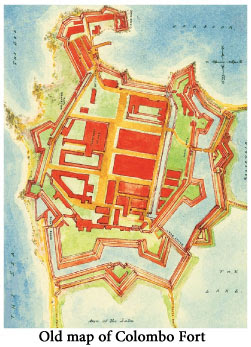 It is recorded that the Port in Colombo was commercially engaged from the 1300s. By 1510 the Portuguese set up a fortified stockade in Colombo, built at the request of King Emmanuel of Portugal. Some old ramparts can be seen inside the present area of the Navy Headquarters in Colombo. One such historical gem is a solid arched monument, with an altar like grotto. Some assume it was a gateway. Thick vines from a tree have covered the left side of this area. Naval sources believe this was once an area used for ceremonial military rituals to receive the Dutch Governor when he visited the Colombo Fort. I was surprised to see a part of the large network of defensive bastions from the Dutch era. A bastion is a fortified structure with guns positioned for defense. The Colombo Fort had 8 bastions named after places in Holland – Zeeburg, Amsterdam, Dan Briel, Middleburg, Rotterdam, Hoorn, Delft and Leyden. Dan Briel is the last remaining bastion in the entire city of Colombo (inside the Navy HQ area). The thick wall made of large granite rocks rises to about eight feet from the ground. One can still see four cannons in their original position.

The area around Grand Oriental Hotel, adjacent to the Colombo Harbour is full of ancient heritage. Historian R. L. Brohier records that a Dominican Monastery existed in 1672 on this same location. The Dominican Friars came during the Portuguese occupation. Later, the Dutch erected a new building, with a lovely view of the sea. Once the British consolidated their dominion over Ceylon, there was a need for an Anglican church. Governor Sir Frederick North published a Gazette notice in 1804 proclaiming that worship services would be held every Sunday. Under the administration of the British the former Dutch mansion became the Government House for the first years of Governor North’s rule. On a subsequent request by Sir Edward Barnes, the grand mansion was consecrated as a Garrison Church on May 22, 1821 by the Bishop of Calcutta, Dr. Thomas Middleton and became St. Peter’s Church. The Dutch Hospital opposite the World Trade Centre is another beautiful building that has been restored and is now a happening culinary venue. The hospital is said to have been built in 1681. The building has two spacious courtyards.

The Old Dutch building in Prince Street, Colombo 11 is another Dutch architectural gem. The two storied colonnaded building was once the residence of Governor Thomas Van Rhee. The building has been used as a seminary, military barracks, orphanage, office complex and a police training school. In 1932 it was later converted to a Post Office.

The restored museum was opened to the public in 1982. All of the above buildings were to an extent influenced by the Dutch East Indies Company, a mega corporation of trade established in 1602. The monogram VOC is derived from this Dutch organization. The company was the world’s first transcontinental employer. These amazing Dutch buildings will stand for decades as a reminder of a bygone era and continue to enrich the beauty of Colombo city. 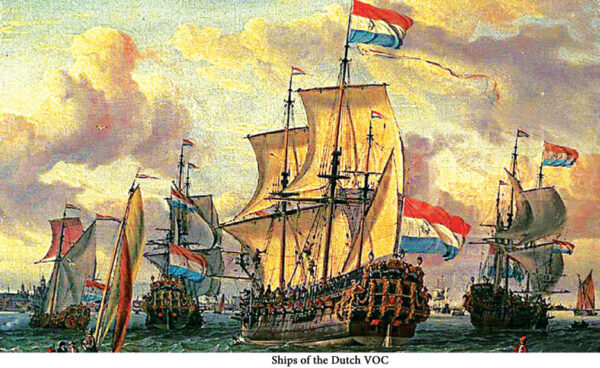 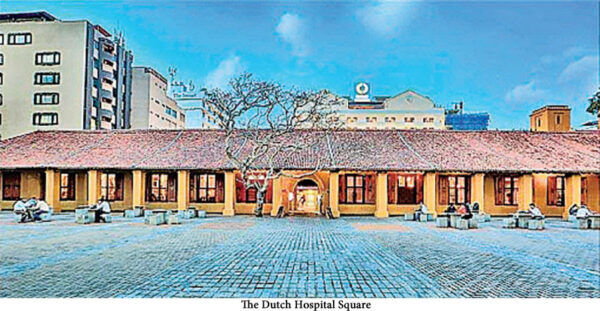 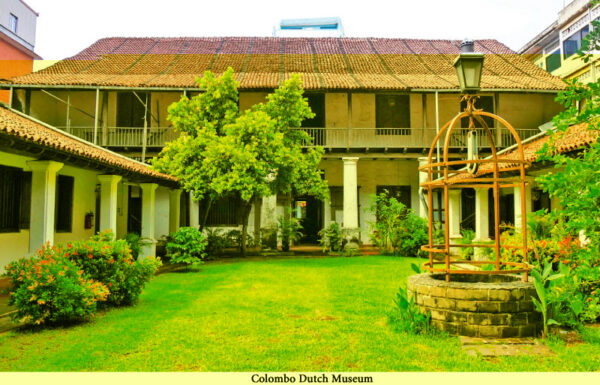