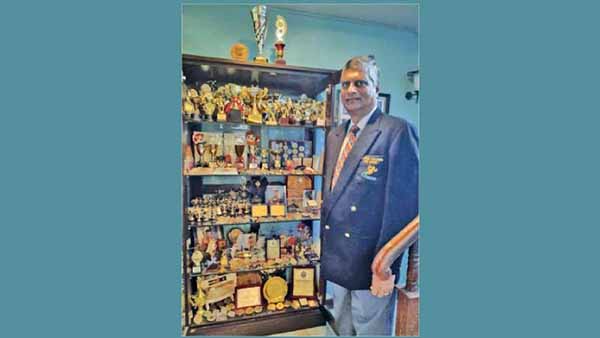 Very few people will know that sportsman Rajiva Wijetunge has completed fifty years in sporting activities this year. This is because he is an unassuming person who continued to do what he loved most and did not look for wide publicity.

Neither did he shine in one particular sport to be the cynosure of all eyes and be under the spotlight in the media. He continued to be involved actively and as an administrator for table tennis.

He attended Royal College Colombo where he did athletics, cricket and table tennis with much success. His pet events in athletics were the shot putt and discus throw and emerged as champion in the under-14, 15, 16, 17 and 19 categories from 1972 to ’79. He also represented Royal at the Public Schools meets, Ceylon Junior Schools Games and National Schools in spot putt and discus throw.

He also played cricket and table tennis and established many records in athletics during his school days.

After leaving school he joined the Mercantile sector and participated in athletics from 1983 to 2018. He has also participated in table tennis, a game which he still continues to be indulged in.

Following are his career achievements:

* Has won (23) medals for Sri Lanka in athletics

*Ceylon Tobacco won the Mercantile ‘A’ div. TT champion in 1987

*Won a Triple crown at the Veterans Championship in 2006

*First Sri Lankan to win an individual medal at the World Masters Games for TT in 2005 in Edmonton, Canada

*Was a member of the Ceylon Tobacco, Ceylinco and MAS teams that won the Mercantile ‘A’ division 15 times

*Wijetunge who commenced his athletic and table tennis careers in ’71 continued participation in both sports for fifty long years without interruption representing his school (Royal), company, club and country which is an unique record for any sportsman

*Was a triple coloursman at Royal College (athletics, cricket and table tennis) and is now a Sri Lanka Masters double international who has won 27 international medals for Sri Lanka at the World Masters, Asian Masters