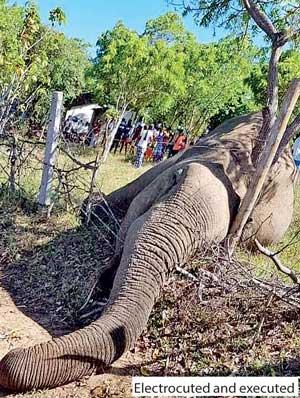 Another elephant succumbed to injuries after being electrocuted near the Nimalawa Sanctuary recently. While most electric fences don’t necessarily have electricity, they are just a simulation to keep elephants away and protect crops. However, the postmortem report revealed that the elephant died of electrocution and a suspect was taken into custody. While it is illegal to draw electricity in this nature, under the Flora and Fauna Protection Ordinance (FFPO) fines and punishments could be imposed for those who harm protected species. But, the Department of Wildlife Conservation (DWC) had to release the suspect on the same day due to lack of evidence; hence the authorities weren’t able to prove him guilty. However, wildlife conservationists believe that community-based fences will be the most effective approach in mitigating human-elephant conflict (HEC). But many barriers exist.

According to Dr. Sumith Pilapitiya, Asian elephant expert and former Director General of the Wildlife Conservation Department, the location has no bearing on the offence.  “The killing or injuring of an elephant by electrocution is a punishable offence where ever it takes place.  Part II, Paragraph 20 (1) of the Fauna and Flora Protection Ordinance (FFPO) states that a person electrocuting an elephant “shall be guilty of an offence and shall on conviction be liable to a fine not less than one hundred and fifty thousand rupees and not exceeding five hundred thousand rupees or to an imprisonment of either description for a term not less than two years and not exceeding five years or to both such fine and imprisonment”.  Considering that the electrocution results in the elephant dying virtually on the spot, finding the culprit who did this should not be too difficult.  That person should be prosecuted to the maximum extent of the law, because this will then serve as a deterrent for future actions such as this,” he opined. END_OF_DOCUMENT_TOKEN_TO_BE_REPLACED