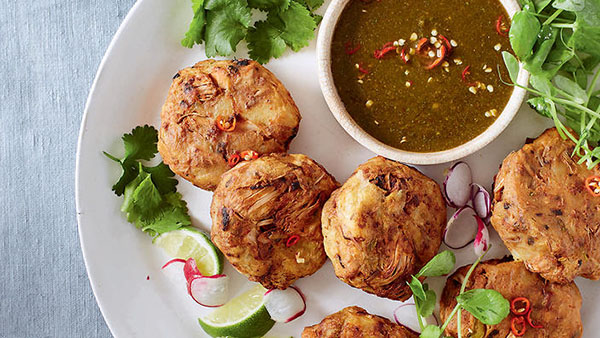 A stunning Filipino dessert? A vegan no-fish cake? A vibrant no-cook salad? Jackfruit can do it all.

— Discover jackfruit ‘no-fish cakes’ and more vegan eats in Living on the Veg, Mondays 7.30pm on SBS Food and then SBS On Demand —

Jackfruit is like the chameleon of the food world, starring equally well in a sweet dessert as it does in a hearty burger.

The different uses reflect that fact that the world’s largest fruit can be used at various stages of the ripening process. It’s understandably popular with vegans because its mild flavour and hearty texture partway through ripening means it can form the heart of many savoury dishes. Fully ripe, jackfruit becomes sweet and softer, perfect for indulgent desserts.

This canned jackfruit recipe, from Luke Nguyen’s Vietnam, is full of flavour but so easy and fast: chop and slice the ingredients, stir up a sauce and toss it all together, and it’s ready in 15 minutes!  END_OF_DOCUMENT_TOKEN_TO_BE_REPLACED 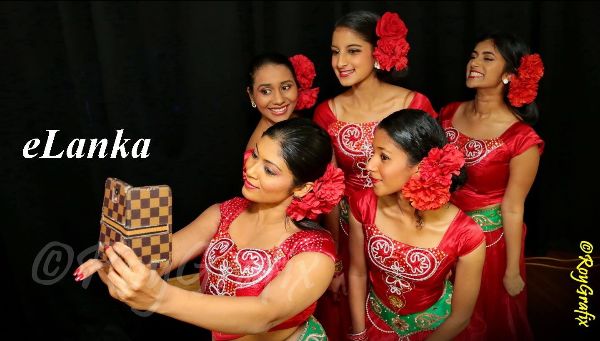 “THE RIVERS OF OLD CEYLON” – By Des Kelly

How Can We Improve Debt Sustainability in Sri Lanka | A Primer on Debt in Sri Lanka – by Mr Murtaza Jafferjee, Chairman of the Advocata Institute

Maroons to relish the challenge – By Nick Creely

A Love story from Ceylon: The British Governor and the Rodi Dancer

When to lodge your tax return

Construction of the University of Peradeniya started in 1946 by 1952

This is why everyone’s embracing jackfruit-by By Freya Herring

This is why everyone’s embracing jackfruit-by By Freya Herring 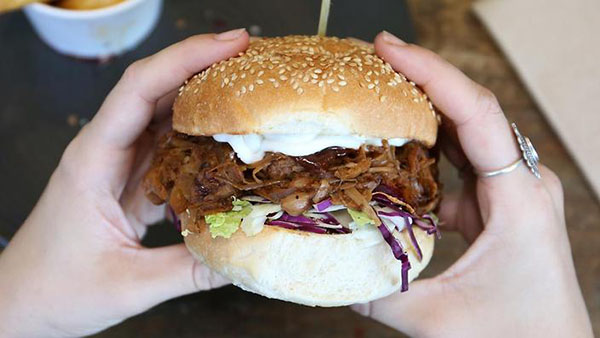 — Explore a Taste of the Territory with Jimmy Shu in his series at 6.30pm Sunday nights on SBS Food and then stream it on SBS On Demand —

Imagine eating delicious, saucy, falling-apart pulled pork – and then discovering that it was not pork at all, but the impressively versatile jackfruit.

Yes, the same tropical fruit that becomes meltingly sweet as it fully ripens. If you thought cauliflower was versatile then you might want to join the growing band of chefs and home cooks who have shown how many ways it can be used, from a vegan “pulled pork” (think tacos and burgers with slaw) to condiments and desserts.

END_OF_DOCUMENT_TOKEN_TO_BE_REPLACED

This is why everyone’s embracing jackfruit 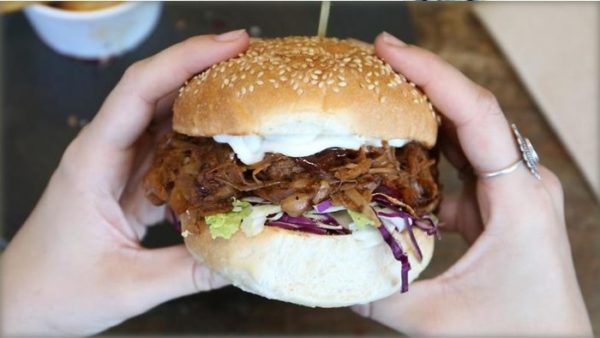 From top-rated chefs to vegans around the globe, jackfruit is winning fans. And jackfruit “pulled pork” is just a fraction of why.

Imagine eating delicious, saucy, falling-apart pulled pork – and then discovering that it was not pork at all, but the impressively versatile jackfruit.

Yes, the same tropical fruit that becomes meltingly sweet as it fully ripens. If you thought cauliflower was versatile then you might want to join the growing band of chefs and home cooks who have shown how many ways it can be used, from a vegan “pulled pork” (think tacos and burgers with slaw) to condiments and desserts.

You might have seen jackfruit before – in fact, we’d wager you definitely have. Whether wandering through Chinatown, through stores supplying goods from the Indian subcontinent and Southeast Asia, or even the odd Harris Farm, you might well have caught sight of a green-yellowish, giant misshapen lump covered with dangerous-looking spikes. Ringing any bells? Well, that’s jackfruit. Jackfruit are the world’s largest fruit. Image by llee_wu via Flickr.

Admittedly, it’s a bit of a job to open it up. Chef O Tama Carey (ex-Berta and now running Sydney restaurant, Lankan Filling Station) explains, “It’s time consuming to prepare – it’s got that big massive skin that you have to hack through, and then you have to peel all the pulp away, and then you get to the flesh and you have to take the seed out as well.” The inside is full yellow wedges of fruit and seed. Image by Tarah via Flickr.

Carey is half-Sri Lankan, and Sri Lanka – along with India – is probably the country most well-known for its jackfruit recipes. “In Sri Lanka they use it at three difference ages,” explains Carey, “The youngest version is still quite unripe, and they slice it really finely and make a mallum.” (A mallum is like a Sri Lankan form of stir-fry or sambal.)

When it reaches its next stage, jackfruit gets its most celebrated moment – as a truly passable alternative to pork. “When it’s a bit older, more like a teenager as opposed to a baby,” says Carey, “they slice it up and make it into a curry, and that’s called polos.” With its firm texture, the meat flakes apart like a slow-cooked piece of pork shoulder. Its neutral, not yet sweet, flavour works brilliantly with strong flavoured sauces, as, like cauliflower, it soaks them all up.

Young jackfruit curry
Jackfruit is the largest tree fruit in the world. Depending on maturity of the fruit, it can be cooked in different ways, including this fragrant curry.

It’s only at its final ripening stage that the jackfruit actually becomes sweet. “The older version is the proper ripe, sweet version and that’s a bit of a fancy delicacy,” explains Carey, “you go to someone’s house and they whip out some jackfruit for you to snack on because you’re a special guest.” In Sri Lanka you see ladies on the roadside freely slashing-up jackfruit with terrifyingly sharp cleavers, selecting the best glossy, yellow lozenges to go into plastic bags to sell to locals and tourists as they go. It’s saccharine-sweet, like eating melting honey candies.

For Lankan Filling Station, Carey has been working on an achcharu recipe (Sri Lankan pickled vegetables) using jackfruit – and when the time is right, she’ll put it on the menu.

“The older version is the proper ripe, sweet version and that’s a bit of a fancy delicacy.”

Carey isn’t the only chef in Australia falling in love with this versatile fruit. In Brisbane at vegan burger-joint Moo-Free Burgers they’re making jackfruit ‘pulled pork’, dousing the unripe fruit in vegan-friendly barbecue sauce. It’s so close to the real thing that owner Johnny Tabet fooled a whole team of testers.

“I invited six of my friends who are not vegan to taste it and I didn’t tell them it was jackfruit,” he says, “Five out of the six couldn’t believe it was jackfruit; they thought it was real pork.” For this he uses canned green jackfruit, which is much easier to find than the fresh, unripe sort. He stocks the cans at Charlie’s Vegan Pantry in Brisbane (which he also runs), and you can find it at select supermarkets – even some Woolworths stores. 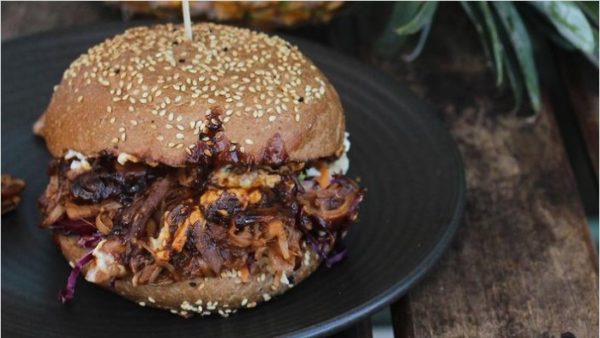 “I think people are now looking at, at least one day a week, not eating meat,” says Tabet, “and I think jackfruit is coming in because you can do so many things with it.” It’s grown in the Northern Territory and in Tropical North Queensland, and is in season from June–April. If you can get hold of it fresh, get the cleaver out and give it a go. Thankfully though, the canned version – be it sweet or green – will hold you (and the rest of Australia) off when fresh isn’t available.

*Due to the impacts of COVID-19 some of the businesses mentioned in this article may not be currently operational.

Explore a Taste of the Territory with Jimmy Shu in his brand-new series at 8:30pm Thursdays from 23 April to 11 June on SBS Food and On Demand.

It’s all owned and run by one family. The kids manage front of house, while mum and dad are in the kitchen preparing a $15 all-you-can-eat feast that includes curries, spiced vegetable dishes, spicy sambols and chutneys. 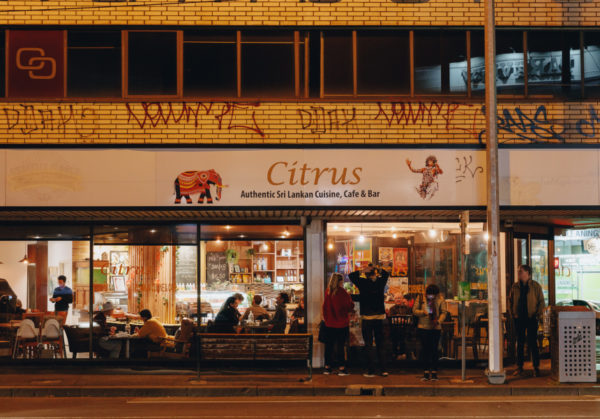 Ravindu Somaweera is 24 years old and has been in Australia for just three years, but he’s already a restaurateur. He co-owns Citrus, a Sri Lankan diner in Fitzroy North, with his sister Mansala, mum Shiyamalee and dad Keerthi.

The staff is “just the family”, says Ravindu, who manages front-of-house with Mansala, while Shiyamalee and Keerthi run the kitchen.

Shiyamalee is the head chef and was taught to cook by her older sister Priyanthi, the head chef and co-owner of Chef Lanka, a Sri Lankan restaurant with three Melbourne locations. The Somaweera family had been working there since arriving in Australia from Sri Lanka, before deciding to go into business together at Citrus.

The family lives in Pascoe Vale but saw a hopper-sized hole in the Fitzroy North market. When some friends decided to move on from their corner site adjacent Piedimonte’s, the family jumped.

Originally called Citrus Gate, the restaurant started with an à la carte menu of burgers and a few Sri Lankan dishes, but it became clear pretty quickly that the Sri Lankan food was more in demand. They scrapped the Western dishes and added a buffet – typical in Sri Lanka for lunch, the biggest meal of the day.

“We weren’t sure if it was going to be successful,” says Ravindu. “It was really slow at the start … but once [the locals] got to know the flavours, word-of-mouth did the trick and now someone brings someone new every day. It’s getting really busy now, and mum’s happy because everyone’s liking the food.”

At lunch and dinner, you’ll find 15 or so dishes from all over the island country. A vegetarian combo plate is $10, or you can get an all-you-can-eat feast for $15. It’s the deal of the century.

Pick up a plate and lay your foundation with two types of rice – saffron and vegetable. Then, remembering to take small scoops to fit everything in, hit each bain-marie for an assortment of dishes that change daily, including yellow-lentil curry, spiced potatoes, fried soy beans, hot buttered fish with peppers, devilled chicken, slow-cooked beef curry, cashew and turmeric curry, green beans with curry leaves and coconut milk, and more.

Next, swing around the island bench and find room for spicy coconut sambol, chilli paste, and chutney made from ambarella, a small green tropical stone fruit that tastes like a fibrous pear when stewed. If you’ve got questions, whoever’s working front-of-house will explain and lead you through the line-up.

Wash it all down with a mango lassi (Ravindu admits this is traditionally Indian, but delicious and popular in Sri Lanka nonetheless), fresh juice or one of the many bottled Sri Lankan soft drinks in the front display.

“Ginger beer is the most popular there,” Ravindu says. “They say that without ginger beer [a meal] is not complete.”

For Ravindu, the ingredients in Australia sometimes leave him missing some of his favourites from home, such as jackfruit curry. He says jackfruit is more expensive here, but you’ll occasionally find it on the Saturday-night menu, when the buffet costs $19.90 instead of $15.

Citrus’s dry spices and coconut milk are imported from Sri Lanka, so the flavours are as close to what the Somaweeras ate in their home town of Kandy in Sri Lanka’s Central Highlands as possible. The difference here is that Shiyamalee works to ensure every dish is gluten-free, and all the non-meat dishes are vegan.

She’s also made many of the buffet curries mild, so diners can add chilli to taste. It’s what Shiyamalee is used to cooking for her children. “I like mild, I don’t like spicy,” Ravindu says, giggling.