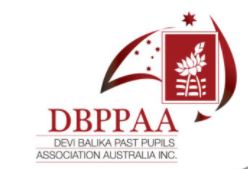 The inauguration of the Association brings memories of meetings, a small group of enthusiastic Devians had in Melbourne, 2011 to discuss the idea of forming a Devi Alumni Association in Australia. The group called themselves “Devians in Melbourne”. As a start, a Family BBQ was organized to gather Devians residing in and around Melbourne. This was indeed a huge success participated by a sizeable number of Devians. With the encouragement and blessings of all, Devi Balika Past Pupils Association Australia Inc. (DBPPAA) was officially launched in 2012.

The administration of DBPPAA is carried out by a management committee. The committee is constituted of the President, Secretary, Treasurer, other office bearers and a few committee members elected at the Annual General Meeting.