Fighting the Fires of Climate Change Through Art-by Anoma Wijewardene

Today is the Global Day of Climate Action

Themes of sustainability and environmental degradation have pervaded my work since 2004, long before climate change or the extinction rebellion became global political issues. Existential anxieties have always driven my art making process. Fueled by my horror at the depletion of our natural resources and in growing disbelief at our rampant pillaging of the planet that sustains us, I focused on these burning issues in seven of my exhibitions. Initially, my paintings were nuanced and implicit, but the escalating severity of the devastation resulted in increasingly interactive, even activist, installations.

The world has woken up to the fact that life on this planet may be endangered beyond repair, when it is almost too late. However, scientists sounded warning bells as early as the 1950s when the data showed signs of the degradation we are suffering today. In their seminal works, James Lovelock in Gaia (1979) and E. F. Schumacher in Small is Beautiful (1973), stressed on the codependency between nature and mankind, and the need for a healthy, sustainable planet to the survival of humankind. Furthermore, I grew up in a household concerned with renewable energy, appropriate technology and agriculture. In that setting I was surrounded by scientists and thinkers who were deeply concerned about protecting the environment and were trying to find solutions to the impending crisis.

It has been devastating for me to watch the words of caution and scientific predictions that I heard in my youth turn out to be horrifically accurate. As predicted, global wildlife populations are in free fall and one million species are at risk of extinction. Coral reefs are projected to decline a further 70-90% even with just 1.5oC increase in temperature; and as I write, wildfires are ravaging California, with no respite. Sea levels, hurricanes and natural disasters seem to occur at a relentless pace and there is increasing evidence that the sixth mass extinction of life on earth is possibly on the horizon.

Just this year alone we witnessed a number of unprecedented events. The temperatures in Death Valley, California, reached record highs of 54.4oC. In July this year, the Arctic sea ice was the lowest ever on record. Australia experienced the hottest December ever recorded, with the annual bush fires lasting longer and spreading faster than ever before, leaving acres of land scorched to the ground. It is estimated that more than one billion animals lost their lives in the Australian bushfires of 2020.

Scientists continue to emphasize that climate change has a “compound” effect on many of the other major stressors experienced today, including human and animal migration and epidemics such as COVID-19. For example, social distancing rules cannot be maintained if there’s a hurricane, forest fire or a heat wave, where people will need to evacuate, and gather at shelters or cooling centers. In the wake of the COVID-19 global pandemic we saw a temporary reduction of greenhouse emissions, as the world came to a grinding halt. However, the idea that the Earth can recover from all the destruction caused by pausing activity for a few months is dangerously naive and misleading.

“We need a fresh paradigm towards a permanent truce with nature in concurrence with her pace and in sync with her rhythm,” wrote Ray Wijewardene, more than a quarter of a century ago. Until this shift becomes reality, until we truly accept that we are nature, and not divorced from or better than nature, we will continue to harm ourselves in a profound and ruinous way. This is what I have sought to highlight time and time again in my work.

At the beginning of the millennium I explored in paint, the desire for flight, for escape, along with our instinct for migration and transcendence.

Birds, in flight and in migration, have a grace and simplicity that we yearn to emulate. I dedicated my 2004 exhibition to them, considering birds as metaphors for the human soul, and the exhibition marked the onset of my own, deeper understanding of our oneness with nature.

The German metaphysical poet Rainer Maria Rilke’s works deeply resonate with my own worldview. His words “It is our task to imprint this temporary, perishable earth in ourselves so deeply, so painfully and passionately, that it’s essence can rise again inside us” inspired a series of my works, which consisted of paintings of tiny portals to different worlds. The resulting images highlight the impermanence and insignificance of humans; and the necessity for the coexistence of the material and spiritual realms.

The images embrace the idea that we are simply spectators of life, with nature being the ever present force. These paintings were exhibited in Sydney in 2005.

The next series, “Aqua” was shown in the Maldives in 2009. I concentrated on rising sea levels and the paintings were my response to the historic underwater cabinet meeting held by the Maldivian government to focus the world’s attention on the fact that if the current trend continues, the country could quite possibly be totally submerged by 2100.

This exhibition, for which I consulted with specialists such as Mohan Munasinghe and Karin Fernando, marked the beginning of subsequent collaborations with environmental activists and experts.

“Deliverance” which followed in 2012 was a three location, trilingual, multi-disciplinary series of exhibitions that went beyond the gallery space, with an installation on the street. Combining video, digital art, installations and paintings with poetry written specifically for the art, I timed the exhibitions to coincide with the disastrously unproductive UN Conference on Sustainable Development Rio+20. The exhibitions communicated simple and accessible scientific research on the issue and I collaborated with the International Water Management Institute and Priyanthi Fernando and Karin Fernando of the Centre for Poverty Analysis. The exhibitions created dialogue with the viewers through an invitation to passersby to share their thoughts on climate change on message boards alongside the art images and data on climate change. These boards garnered a variety of responses from all ages, demographics and many languages. Fred Pearce, author of “When Rivers Run Dry” wrote for the exhibition that, “Ancient civilizations, in Sri Lanka and elsewhere, were built around the management of water. Yet it is so much a backdrop to our modern lives that we often ignore it – until it isn’t there. Then it is our ‘Deliverance’”.

In these artworks the figures appear almost subliminally, as though embedded in nature, in strata, in water, thus implying human’s indivisibility from nature, and the images reiterate the fleeting insignificance of humans, in a world that has been evolving for billions of years. 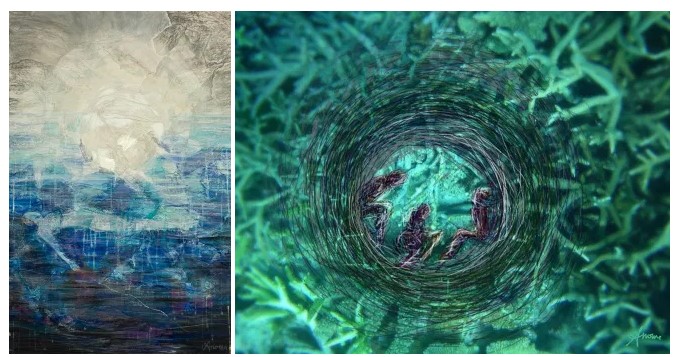 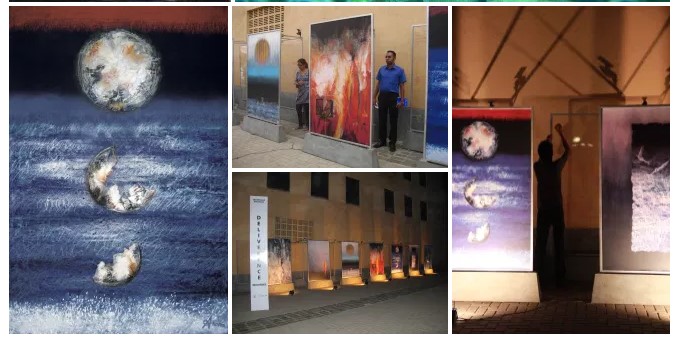 “Earth Rise Within Us”, which was shown in Dubai and the Maldives in 2010 and at Sotheby’s in Hong Kong in 2016, was a seven panel installation. It invoked the seabed, the Earth’s core, the moon, sky and humans, in the belief that all humans are stakeholders in the planet’s future. The viewer was encouraged to engage with the panels, moving in and out and round them, thus becoming a part of the installation. In doing so the viewer could contemplate and sense her oneness with nature. 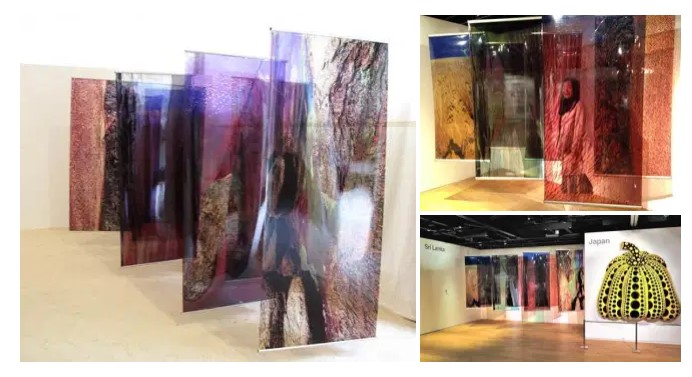 The groundbreaking UN Conference of Parties on Climate Change in 2015 in Paris was the catalyst of my exhibition, that I titled “EarthLines”. The art referenced the song lines of the aborigines, who see themselves as protectors of Mother Earth. Through a glass installation I evoked strata, erosion and mutability, and the patterns and movements of the earth, and the biomimicry of nature inspired me when I worked on the paintings. I etched the sculptures with quotes from philosophers and poets, both ancient and modern, who urge us to heed the desperate cry of the planet. Poetry was written specifically as a response to the paintings, to enrich and strengthen the significance of the message. Ranil Senanayake of Earth Restoration and Manishka De Mel at the Earth Institute at Columbia University gave me vital input on this exhibition,

In 2016, the Fairway Hotel in the Fort commissioned me to work on 300 prints on sustainability, which are now on permanent display at the hotel.

My last climate crisis collection of work was shown in London in 2019.  The exhibition was titled, “The World is not Given by his Father but Borrowed from his Children”, from a quote by James Audubon. Greta Thunberg, the activist and change maker, who created waves as a teenager by shedding light on the crisis, was featured in the series.

Each of the images possess one common feature, a lone, red figure, symbolizing Greta and her dogged quest to save the Earth. This is the only time a named figure has appeared in my works, if only symbolically.

The world is clearly aching from the devastation humankind has created and our very own shores in Sri Lanka aren’t as pristine as we believe them to be. Habitat fragmentation – deforestation driven by unsustainable, shortsighted development projects and resource extraction, inadequate waste disposal mechanisms, the increase in human-wildlife interaction are just some of the numerous issues we must address. In 2018 the UN international Panel on Climate Change (IPCC) warned that we have twelve years to limit this catastrophe with urgent changes needed to prevent society from risk of extreme heat, drought, floods and poverty… now 10 years remain. What the future holds for these sensitive and biodiverse habitats, is entirely unknown.  Recently Sir David Attenborough urged us to become protectors of our fragile planet and said, “It will require systemic shifts in how we produce food, create energy, manage our oceans and our materials. It will require a change in perspective.”

My work has attempted to shed light on our culpability in the destruction of our planet. Yet my art looks to nature as the ultimate healing tool, instilling hope by celebrating the joy of the natural world. After seven exhibitions, and a lifetime of watching the heedless devastation of our precious earth, it is clear to me that scientists, activists, writers and artists, have no option but to continue to persevere to raise awareness and campaign for the preservation of our beautiful home, planet Earth.

To that end, I reflect on the haunting words written by Ramya Chamalie Jirasinghe, as a response to the Deliverance paintings.

“We will see that there is no

Place to look but face the

Earth in its splendor

Stars that will warm us

On the longest night

When we have forsaken ourselves

Forgotten the colour of the sun

And have drawn blood

Our veins will remember what

Our minds have forgotten

And our bodies will take us to

The breaking dawn and hurl

Us to the beginning and end.

And in that moment

We will hear the sound of the

And we’ll be glad that

Only time will tell what the future holds for our precious world. As an artist, I hope I have been able to resonate with the core that connects to the natural world that lies buried in each person, to help heal this scorched Earth and stem its ongoing destruction.

Groundviews interviewed Anoma in 2012 when she launched the Deliverance exhibition. See the interview here.