Her profile in rowing might not be the same as an impressive oarswoman with many records under her belt, but her tale is far extraordinary and truly inspiring. From an obese 14-year-old kid trying out her luck to trim down in size, to a well-shaped individual – physically and more importantly, mentally – Ishika de Silva changed the destiny of future oarswomen, by becoming the first-ever female Captain of Colombo Rowing Club (CRC). Ishika de Silva, rowing for CRC when she was a much younger schoolgoer – Pic courtesy thePapare.com

Her name is now permanently written on the wall of CRC in the list of Captains since 1864. She becomes the first lady to have the CRC flag hoisted by the boat boy upon her arrival each time she enters the 155-year-old Beira Lake club.

“It’s a humble feeling. I feel completely honored, at the same time I take things lightly. But I think a job can be done by anyone, I don’t think gender plays a huge role in it. It mainly depends on your personality and capability,” Ishika, a positive-minded individual, said.

CRC has had many Captains over its history of 155 years, but this 26-year-old, once timid lass, now takes reigns as the person-in-charge of rowing and activities and other related matters in rowing. Presently a Business Analyst at MAS Group, Ishika has very little to prove naysayers on what it takes to become a successful and reliable individual.

“When I was around 13, my mum was really stressed out, because I was an obese kid. She pushed me to do sports, so I would lose weight. I tried squash, badminton, and swimming before really settling down with rowing. I liked rowing because some of my close friends were also involved and I really liked the culture involved around it. Rowing was much difficult than the other three sports I tried out, but somehow I continued,” recalling on her beginning and to where it paved off today, Ishika said. 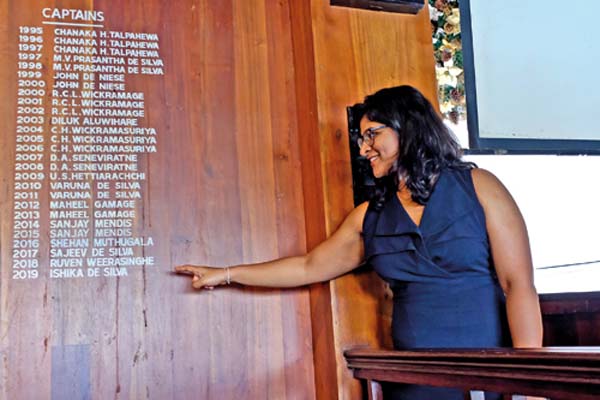 Ishika proudly pointing out her name on the CRC Captain’s List, the only female name among men – Pix by Amila Gamage

Beginning her rowing career as a youngster at Musaeus College, Ishika had represented her school at many junior events, and even two Ladies-Musaeus Regattas, before changing over to Asian International School (AIS), where she displayed her true prowess as a well-balanced individual.

She went on to pursue her higher studies at Royal Institute later on but continued competing for her club, the Colombo Rowing Club, where she has been a member ever since taking up rowing. From the beginning to-date, Ishika has won many events, locally and internationally, thus becoming silent, yet, firm achiever.

“I have won many medals at the Nationals, but my best came in 2013, which was apparently my last at that level. I won the golds in Open Double Scull and Open Scull, which gave CRC the overall championship. In addition, I have represented CRC at Colombo-Madras for many years, as well as the ARAE Regatta, and won many of my events. I last rowed in ARAE in 2016 but still continue to be part of CRC team at the Colombo-Madras. My best at Colombo-Madras was in 2012, where I won the Scull and the Double Scull, and this year, I won the Pair and the Four and went on to record a whitewash in the Women’s events,” the undeterred individual recalled some of her achievements.

Obviously, the spotlight fell on Ishika after she became the first-ever female captain of the CRC, since 1864. But noiselessly, she has already notched up a double of ‘first-ever’ prior to her latest appointment. She was Vice Captain to Ruven Weerasinghe last year, the first time a female was appointed as deputy to a Captain at CRC, which also opened her the doors as a Committee Member, also a ‘first-ever’. “I owe a lot to rowing, it made me a much improved person”

The girl, who does not think twice to compete against boys in her most loved sport, however, opts to stay quiet most of the time, but when it comes to a task, she has all the character to complete a job or get it done through leadership. Most at CRC know her as a silent, but realistic character.

“There was a big talk that I’m a female, this and that, but I have competed against boys because I tend to be a tomboy. I love challenges and the CRC Committee know that I’m reliable when it comes to getting a job done. I feel that if a man can do something a woman too can do it, besides the physical strength. The culture we have grown up in, I feel that women have not got the opportunity to really show their potential. But I think if it comes to a point that a man and a woman are in an equal situation, I don’t think the woman should get preference. But at the same time, if the woman is at a higher level and capable, I think she should really get the opportunity to be in that position. I think I was treated the same way. People say that I broke a barrier, it’s a humble feeling because it’s a different thing, but it’s a responsibility and I’m picked to fulfill that,” Ishika stated, firmly.

Unlike others, Ishika thanked rowing for putting her on a path that is prosperous, and for unearthing her true potential, as an individual. During her tenure as Captain of CRC, Ishika hopes to build a culture where Club Rowing is an option. Her observations are accurate as an experienced oarswoman in encouraging school-goers to continue rowing. Her focus will be to build a culture where the youngsters would continue rowing for CRC and continue the sport, even after they leave school.

“They can easily balance rowing and studies or work. Doing just one thing I feel they lose out and achieve less in life. Rowing shaped me up to become a more confident person, even this new role at CRC has improved me a lot than before. I used to have stage fright, now matters are getting better with the new responsibility. Not only it is empowering me but also helping me lead a team as well as managing things, and also with work-life balance. With time it will help improve my interpersonal skills far greater, I’m glad that I chose rowing as a sport,” she said with gratitude.