Happy Birthday Jesus How it all came about… Christmas is over, and so is the festive season. Yes, there were quite a few interesting happenings, during the festive period, and one particular project that got the attention of many was the song, ‘Happy Birthday Jesus.’

It was not just another festive song; it was the brainchild of the renowned artiste Melantha Perera. And the song brought into the spotlight several local artistes…and those based abroad, as well.

According to Melantha, he was trying to work out a way to ‘meet and greet’ his musician friends, especially those living abroad.

“I felt that the only way we could ‘meet up’ is by getting involved in a song where we could renew our friendship and have something to talk about,”

In 2019 (Covid was not in the picture then), Melantha had a similar idea and invited a few of his retired musician friends, to be a part of the action, but they were not in favour as it involved recording the audio and video, using their mobile phones.

Many thought that a mobile phone recording wouldn’t do justice to their talents.

Nevertheless, Melantha decided to do the needful last December, 2021, and went on to say:

“I compose a Christmas song, every year, for the students of my music school, Riversheen School of Music. Last year, I only had students online, due to the pandemic, and one of my students, in Australia, sang a song, called ‘Happy Birthday Jesus,’ and I fell in love with the title as we have tons of Christmas song only mentioning the name Christmas. 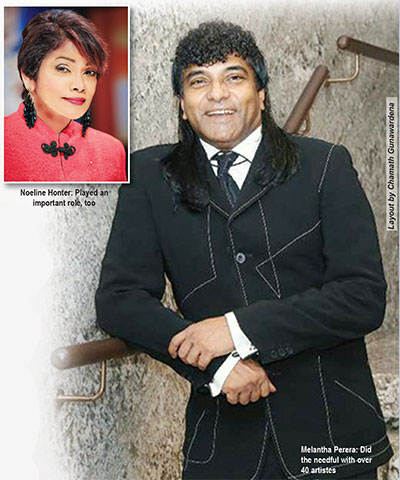 Melantha immediately worked on ‘Happy Birthday Jesus’ and, with Noeline Honter’s assistance, managed to get together a star-studded lineup to do the needful.

“I believe everyone enjoyed getting involved in putting together ‘Happy Birthday Jesus,’ because the feedback that has come my way has been overwhelming,” says Melantha.

According to Melantha, around 40 artistes were involved in ‘Happy Birthday Jesus – all doing their recordings, at home, and using their mobile phones – and the song turned out to be a hit on YouTube.

Some of the big names that showed up on ‘Happy Birthday Jesus included Melantha, Noeline, Judy, Sohan, Sherwin, Marlon, Arith, Rozanne, Kay Jay, Suzi, Rukshan, Piyal, Geoffrey and Kirthi, with around ten students, from the Riversheen School of Music, joining in the chorus and harmonising.

“What was originally thought to be a gigantic task, worked out perfectly well and everyone seems thrilled with what we finally achieved…using only our mobile phones,” added Melantha.

You can check out ‘Happy Birthday Jesus’ with Melantha Perea and Friends, on YouTube.