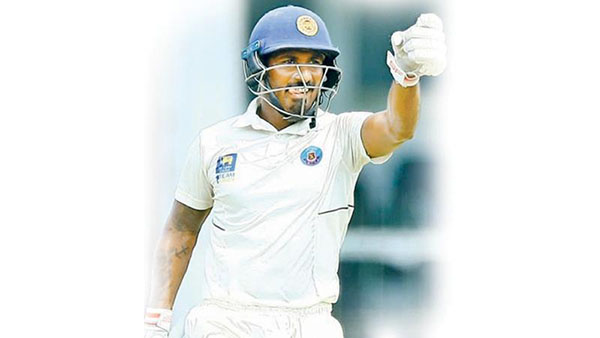 Lahiru Udara Igalagamage: Outsmarted the big guns but no place in the Sri Lanka squad

Sri Lanka’s best in-form but internationally untested batsman Lahira Udara Igalagamage has been sent into cold storage after a 22-member squad was selected for a high-intensity training camp outside Colombo in preparation for next month’s tour of South Africa with no official sanction.

The 22 players, some of them regulars and made up of seven fast bowlers, were picked on what is said to have been “internal advice” meaning recommendations given by Sri Lanka Cricket’s technical advisers in the absence of an official Selection Panel whose term expired two months ago.

Sri Lanka Cricket (SLC) was taken unawares over the appointment of a new selection committee when the Sports Ministry which endorses or redefines selection panels asked it for an additional five names making up a total of ten nominees from which the final five were to be approved.

But the sticking point was that Sri Lanka Cricket had been unable to decide on an additional five names after several former players now in retirement, but involved in other fields, declined the offer which is a full-time job.

“We have told them (Sports Ministry) the urgency of having the Selectors in place in view of the impending tour of south Africa,” said Sri Lanka Cricket secretary Mohan de Silva.

The Ministry had even gone to an unacceptable extent of asking SLC to also declare the name of a female candidate which has never happened in the past and does not make the best of a collective working arrangement for a Selection Committee which is one of the most publicly scrutinized arms of the sport’s administration.

But with the clock ticking fast and the current focus on the money-spinning Lanka Premier League (LPL) fears have been expressed that Udara could end up a sidelined batsman forever in the same way many players had it in the recent past.

Udara 26, took the Sri Lanka set-up by storm clobbering the highest aggregate of 1039 runs in what is called the SLC Major League that included three hundreds and six half centuries with a top score of 290 not out playing for his Nondescripts Cricket Club (NCC).

That he has not been selected in the first place mucks of a shady system that continues to proliferate.

But De Silva said the 22-member squad in training for the tour of South Africa is yet to be given the final endorsement.

“There could be changes and one or two players left out could make the final tour party,” said De Silva.