OF ELLA, RAVANA CAVE AND THE FALL By Sanath Weerasuriya – Daily Mirror

Cave tunnels prove beyond doubt the architectural brilliance of King Ravana. The tunnels served as a quick means of a secret passage through the hills

Ella Gap is no secret destination for many Sri Lankans. Charms of the hill station with its breathtaking view from the British era motel aptly named ‘Grand Ella’ have impressed travellers for decades. Some travellers have named Ella Gap as one of the best views in the Badulla District. However for Sri Lankans, Ella is a stopover whenever on a longer journey, a short break for a refreshing cup of tea incorporated with images of a magnificent vista as a backdrop Gap. From adventurous hikes along the verdant slopes to a casual walk along the railway track, if there was one word to describe the place, it would be ‘charming’. 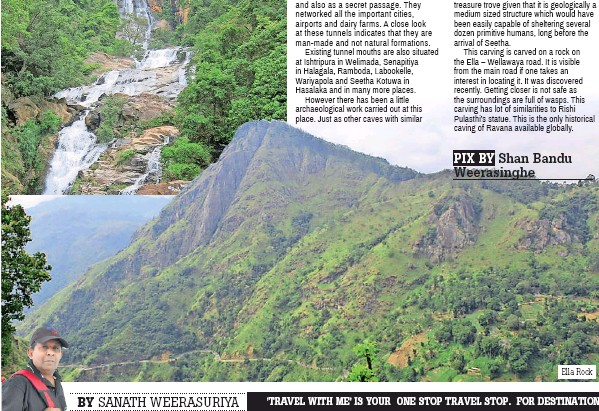 Apart from its beauty and tourism attractions, Ella Gap mysteriously binds one to many legendary places and stories. Ravana Falls is the biggest link to the historical Ravana caves located in the Ella Gap.

The Ravana Ella is one of those rare treats for any traveller, with its ideal location alongside a main road. The breathtaking majesty of the fall would usually be enough to enchant even the seasoned traveller, yet the legends and stories associated with this fall make it one of the best documented natural wonders of the country, firmly enshrined in Ravana history since time immemorial.

Dropping in three distinct steps from the Ella gorge to the plains below, Ravana Ella is one of the widest cascades in the country. It still is surrounded by lush vegetation and wilderness, with little disturbance to its natural beauty. Except for adventurous local tourists who try to scale the precipice, sometimes at their own peril, there is little that has changed in the scenery of this most celebrated fall in the region. 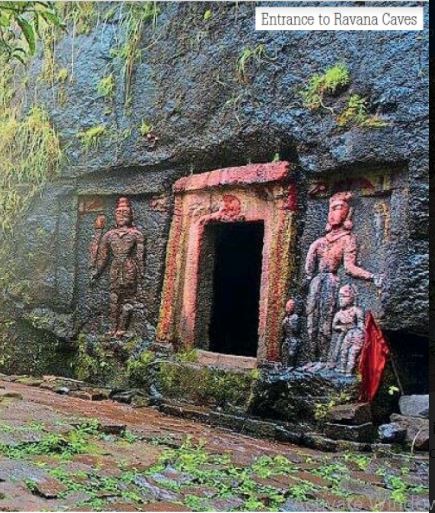 The story of Rama and Seetha is said to be older than recorded history in Sri Lanka. Whether it is the stuff of

legend or has basis fact, the story is full of romance, valour, betrayal and intrigue. According to the legend, the Indian Princess Seetha was abducted by the powerful ruler of Sri Lanka called Ravana, and kept in captivity in the central hills of the country and the Cave is one of the secret hideout of Ravana. 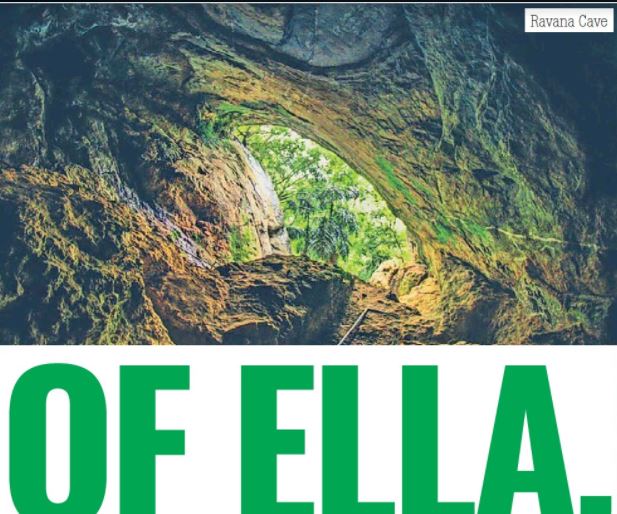 The cave lies 1,370 metres (4,490 ft) above sea level on the foundation of a cliff, and is one of the most popular tourist attractions with a historical value.

Travelling from Ella on the Wellawaya road, a small sign board marks the turn off to the Ravana Cave, considered to be the abode of the princess. The legend of the epic battle between Rama and Ravana goes that the Lankan King took his royal captive and fled to the Uva region from his capital of Ravana Kotte believed to be somewhere near modern day Nuwara Eliya, when Rama invaded the island. Here, it is said that Seetha was kept captive in a cave. Today that cave could be visited after a short hike of around 500 metres.

Travellers must first visit to Maha Ravana Viharaya and Ravana Cave is just one kilometre away from there, climb up the steep path that led towards the cave. The climb is quite tough with about 650 steps – uneven steps; many of them are quite steep, just on steep rocks.

The cave in itself is not very impressive to someone who has very high expectations. Mainly because it is a tough climb and once you reach the place you will only see a small cave.

Like the Isthripura Cave in Welimada, legend has it that it was used by King Ravana to hide the Princess Seetha. It is also thought to be connected to the cave at the Dowa rock temple in Bandarawela (part of King Walagamba’s famous ‘tunnel network’). Archaeological findings include a human skull dating back to 20,000 BC.

These tunnels prove beyond doubt the architectural brilliance of King Ravana. The tunnels served as a quick means of transport through the hills and also as a secret passage. They networked all the important cities, airports and dairy farms. A close look at these tunnels indicates that they are man-made and not natural formations.

However there has been a little archaeological work carried out at this place. Just as other caves with similar colourful legends have revealed far more scientifically important information regarding early human habitation of the country, the Seetha cave might be such a treasure trove given that it is geologically a medium sized structure which would have been easily capable of sheltering several dozen primitive humans, long before the arrival of Seetha.

This carving is carved on a rock on the Ella – Wellawaya road. It is visible from the main road if one takes an interest in locating it. It was discovered recently. Getting closer is not safe as the surroundings are full of wasps. This carving has lot of similarities to Rishi Pulasthi’s statue. This is the only historical caving of Ravana available globally.