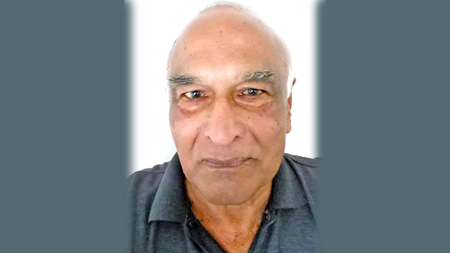 St.Peter’s College, Colombo one of the pioneer Catholic schools in the country played a significant role in producing several top class academics and sportsmen, who brought honour and fame for their ‘Alma Mater’ club and country.

Desmond Harridge was a versatile sportsman produced by St.Peter’s College, Colombo. His father Noel was a businessman and mother Norma was a housewife from Colombo. He was born to a family of three with two elder brothers late Christopher who played Cricket and Rugby for college later represented the Colts Cricket Club while the other brother is Michael who is currently living in Colombo.

He was a sports fanatic from his tiny days as he went on to engage in Cricket and Athletics apart from best loved game of Rugby at College. His initial interest in rugby started when he was about six years old, while living down Isipathana Mawatha in the vicinity of Havelock Sports Club. He quite often walked across the grounds and watched the players practice there. His dad was a member of the club and used to take him frequently to witness the Park Club matches. His only ‘boast’ in Cricket is that Roy Dias was a former National player under his captaincy in the under 14 team.

In 1966, when he was mere 14 years old, he was picked to play as a second row forward for the College first XV team towards the latter part of the season. His first coach was Archibald Perera and the captain of the team that year was Hamzie Hameed. In the next two seasons, he established a regular position in the side and went on to be selected to play for Colombo and Combined Schools sides. In 1969, after playing just one game for St. Peter’s, at the age of 17 years he decided to quit his academic career due to various reasons from school seeking employment at the Colombo Gas Company, while continuing his rugby career by joining Havelock Sports Club. Within two weeks of joining them, he was selected to play in their ‘A’ division team as a second row forward.

He launched his club career by making his debut against the Kandy Rugby Football Club.

The highlight of the year was, he was selected to play against the CR and FC, who were considered as one of their arch rivals in rugby. One of the unforgettable memories of that match was when he tackled Sari de Sylva, who was one of his heroes due to his skills and robust way of playing. His coach that year was Nimal Maralande.

In 1970, he remained as a regular player in the Havies side which was captained by Jeff Ratnam and went on to play in his first Clifford Cup final game where they were joint winners with the Police team in a cliff hanger game which ended in a 6-all draw. Next year rugby season was affected by the civil unrest in the country due to the insurgency and only Clifford Cup tournament was played in which they were knocked out by CR and FC in the semi final 6-14. However, later on that year he was chosen to play for a CRFU side vs the Paris University team which visited Sri Lanka. In 1972, while maturing as a quality player, fortunes changed and the pendulum swung his way as there were two notable events occurring in his rugby career.

Firstly, when he was selected to play for the Colombo and President’s XV teams respectively against the London Welsh rugby team who visited Colombo after their victories over the All Blacks in New Zealand. Some of the players in their team were J.P.R Williams John Dawes John Spencerand Mervyn Davies, four of the great names on the international rugby arena at that stage. The second event was he being selected to represent Sri Lanka at the Rugby Asiad, which was played in Hong Kong, which was a real honour for any player. He played with Dr.

Maiya Gunasekera as his second row partner at the Asiad. Besides himself, there were two former Peterites in this team namely Hadji Omar and Hamish Paternott. Earlier that year, he also played two games against the visiting Australian Emus.

In 1973, he continued to play for the Havelocks under Royden de Silva’s captaincy, who was also his regular partner in the second row there. While enjoying his rugby he then decided to get married . In 1974, at the age of 22 years, he was appointed as the captain of the Havelocks Sports Club. It happened as there was an influx of many young players, who had played school rugby in the previous year joined the club. He was lucky enough to associate with several experienced lads like Omar Sheriff, Anton Benedict, and Hafi Abdeen who also joined the club that year.

The side was coached by Gamini Fernando who was excellent at not just honing our skills, but also helped in building up their confidence while believing in their playing ability. This guided them in winning the Clifford Cup that year by outsmarting the CR and FC16-4 in the final.

However, the following year, he decided to join the Hotel Lanka Oberoi as an Assistant Manager and this involvement in working in many varied shift duties and irregular hours of work made it difficult to keep up with his rugby training. Coincidence with this factor, expecting the arrival of their first child, left him with no choice but to retire from the game.

The oval shaped ball game to him was much more than what just took place on the field of play but became his ‘Way of life’. The camaraderie amongst the players, officials and supporters was just incredible and many friendships were formed, which remain very strong even up to now. This is not just with his former teammates, but also those whom he played against.

He says that the names of all those who were a part of his journey through this great game are too numerous to mention but Glen Van Langenberg, Noel Brohier, Tyrone Holdenbottle, Dan Ratnam Jeyer Rodriguesz Thajone Savanghan Shafi Jainudeen Jeffrey De Jong and Ana Saranapala of Havelocks while CR and FCs Reggie Bartholomeusz Didacus De Almeida Ronnie Schokman Tikiri Marambe Ajith Abeyratne and CH and FC s Darrel Wimalaratne Lorensz Pereira Rodney Paternott Bryan Baptist Horace Perera and Harindra Gunssekera were some of them.

He migrated to Australia in 1984 with his wife Suzie and have two sons Evan and Andre.

He is blessed with five grand children. He currently lives in Melbourne where he remains as an avid follower of the game and is a passionate supporter of the Wallabies.