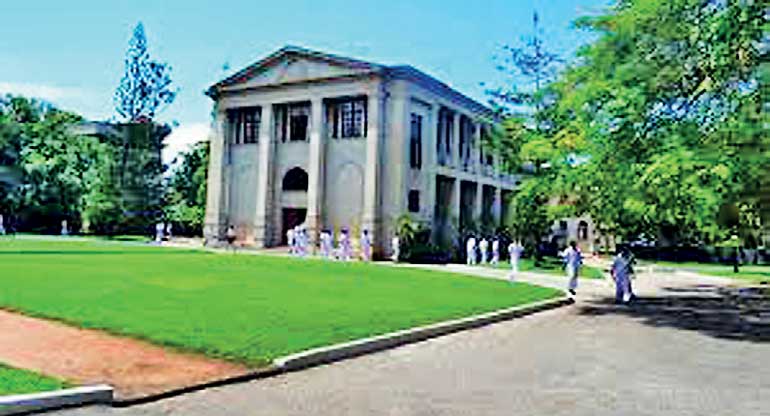 S. Thomas’ College was created as the fulfilment of a dream and vision of the First Anglican Bishop of Colombo, the Rt. Revd James Chapman on 3 February 1851.

The college was first established in the then prestigious location of Mutwal, overlooking the Colombo Harbour.

S. Thomas’ College thrived at this location and grew from strength to strength. The vision of the Founder was to produce men of character and also be a platform from which God-fearing men who would want to serve the Lord, as Christian Ministers would emerge.

However, besides producing men for the church, the college produced men who could be rightly referred to as “Giants amongst Men” for the Nation of Ceylon.

Most of the civil society leaders from political leaders to those who headed the State Assembly and then the first Parliament and the Judiciary as well as that very core area –learned men who became school teachers, were produced by S. Thomas’ College.

The college has to take such pride that the very birth of Sri Lanka and the birth of the main political parties of Independent Sri Lanka were founded by products of the school.

It is also a fact to be noted that a large number of sons of college, also served in the Military and Police. Included in that number are the very many who went onto serve the then Colonial power in World War 1. It was a Thomian who became the only Ceylonese recipient of the Victoria Cross, the world’s most recognised medal for battlefield valour.

The almost meteoric growth of the school at Mutwal, then faced an unexpected challenge around 60 years after the birth of the College — the arrival of steam ships!

These ships that were coal fired, began to spew smoke, filled with coal dust into the atmosphere when arriving and departing from the Colombo harbour, which was beginning to boom as a bustling sea port.

This coal dust blew with the winds of change and settled on the once scenic hill overlooking the Harbour. The same hill on which sat the beautiful campus of S. Thomas’ College.

Thereafter the then Bishop of Colombo Rt. Revd E.A. Copleston and the then Warden of the College, Revd W.A. Stone together with C.E.A. Dias an influential and concerned Old Boy, as well as a few other concerned members of the Thomian Old Boys Association, began serious efforts to relocate the college.

This finally came to pass on 26 January 1918, at Mt. Lavinia, this time overlooking the ocean, as against the harbour.

The College of S. Thomas the Apostle, will therefore be completing 100 years at Mt. Lavinia, in 2018 – with this first century of existence at Mt. Lavinia, being an amazing journey of success and service to our beautiful Motherland of Sri Lanka and also to the Anglican Church of Sri Lanka as originally dreamt and envisioned by the Founder.

The incumbent Warden, the 19th to hold this very special office of service, is the Revd Marc Billimoria, an Old Boy of the college.

It has been a vision of his from many years back, to fittingly celebrate the 100th anniversary at Mt. Lavinia by celebrating the varied gifts that the products of the College have been enriched with as a result of being nurtured by some amazing tutors and builders of men; by the facilities available and by the value systems that have grown over the years, to embody what is now termed as ‘Thomian traditions and Thomian values’, which include amongst others the mindframe enriching so-called ‘Thomian grit’ which refers to a sense of courage and of perseverance that is of such value to moulding the minds and character of the boys of the college.

The Special Events Team of S. Thomas’ College, comprising a group of Old Boys, that first came into existence in 1996, a group that is part of the Old Boys Association, that has specialised in working directly with the Head of the School, to provide leadership for delivery of major Projects of the College, has come forward to support the Warden, in his very special endeavour of celebrating 100 years at Mt. Lavinia.

Accordingly a string of activities have been drawn up to celebrate the areas of talent and skill that are considered as very special for all Thomian students who enter through the portals of the college – areas of specialisation that have been prized as hallmarks of the Thomian value system.

These relate to choral music; drama; music in all its forms; debating and sports.

The series of events will culminate in the very traditional and core Thomian “way of celebrating anything of value” which is by conducting a Thanksgiving Service at the Chapel of the Transfiguration, which in itself has influenced and strengthened generations of Thomians, on 26 January 2018. This will be followed by the unveiling of the Bust of Warden Stone and Portrait of Bishop Copleston and the traditional Special General Assembly, followed by a Fellowship Lunch for the Thomian community.

A Cycle Parade and walk from Mutwal to Mt. Lavinia follows the next day, 27 January.

A Special Gala Banquet will be held on 17 February, at the same venue where many of the original Thomian functions were held – Galle Face Hotel.