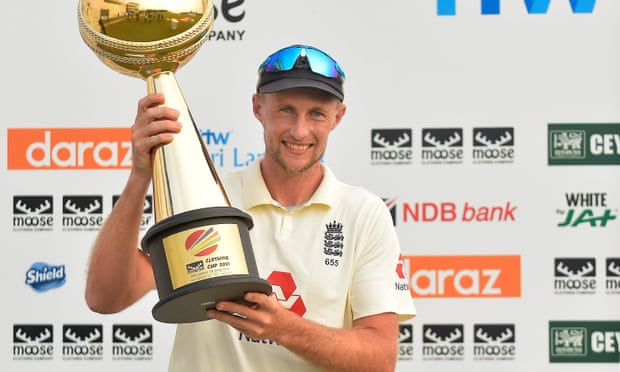 A remarkable day of fast-forward cricket ended with the simplest of jogged singles under a setting sun, as Dom Sibley casually tucked the ball into the leg side and called Jos Buttler through to seal a six-wicket win for England and 2-0 series clean sweep.

It was a low-key but satisfying conclusion to a barnstorming fourth day from Joe Root’s tourists. They had spent the first three days of the match simply trying to stay in the contest but suddenly found themselves set 164 to win, after Jack Leach and Dom Bess had met expectations by gutting Sri Lanka’s batting lineup for a mere 126 all out.

The two sons of Somerset’s oft-maligned Ciderabad shared eight of the 15 wickets to fall across three electric sessions of Test cricket and though England’s chase wobbled slightly at 89 for four – Lasith Embuldeniya completing a 10-wicket match haul – Sibley and Buttler provided the cool heads required with unbeaten scores of 56 and 46.

While Buttler is beginning to make a habit of overcoming such scenarios, this was a particularly sweet moment for Sibley. The opener’s three previous innings on tour had lasted less time than it takes to sing the Sri Lankan national anthem, with the left-arm angle and guile of Embuldeniya exploiting a glitch in his mechanical technique.

One thing Sibley does possess is a rock solid temperament, however, and though three reviewed lbws went his way – each given not out on the field and shown to be umpire’s call by Hawk-Eye – he brushed off reminders of his struggles from Niroshan Dickwella behind the stumps and chiselled away for 144 balls, allowing Buttler to complete an encouraging tour with both gloves and bat through some of his typical attacking brio.

Some of Sri Lanka’s tactics to Sibley in particular were slightly questionable, allowing too many easy runs off his pads. It somewhat eased the pressure they had built up after Embuldeniya had removed Zak Crawley (13), Jonny Bairstow (29) and Dan Lawrence (2), and Root (11) was bowled by the debutant Ramesh Mendis while sweeping.

According to the analysts CricViz, this was the first time since 2017 that Root has been dismissed playing the sweep, with 220 attempted successfully during this time. If anything this sounds low, with the enduring image from this series win being the sight of the England captain dropping down to either guide or thrash the ball with a horizontal bat while chalking up his 426 runs at an average of 106.5.

Needless to say by following last week’s 228 with a majestic 186 in England’s first innings, Root was both man of the match and man of the series. The return to form is welcome, while the 30-year-old has also become just the second visiting captain after Pakistan’s Moin Khan back in 2000 to lose the toss in Galle and win, doing so twice.

Much like the first Test, Sri Lanka were left to rue a horror innings with the bat and one that left the target light. The impressive Embuldeniya did swat 40 runs from No 10 but higher up there was a touch of the suicide squad from Monty Python’s Life of Brian as Leach and Bess – the People’s Front of Taunton? – claimed four apiece.

The pair had sent down 64 wicketless overs in Sri Lanka’s first innings, when all 10 batsmen fell to seamers. But Jimmy Anderson, responsible for six of those, bowled just a couple with the new ball after England added five to their overnight 339 for nine, as Root turned to his spinners early and watched a cascade of dismissals ensue.

Crawley pouched three fine catches at short leg amid 35.5 overs of chaos that saw Leach and Bess adopt attacking lines and prey on scrambled minds. Anderson pulled off the pick, however, holding a swirling effort over his shoulder at mid-on after Dinesh Chandimal had been goaded into a big shot by some cheeky words from Root at slip.

Four chances did go to ground but none proved too costly, while there was another catch off the boot. Buttler, a victim of this on day three, successfully reviewed with Root off the field to remove Mendis, before the England captain returned, brought himself on to bowl and pilfered two for none to snuff out the tail.

It meant that spin had accounted for all 10 wickets, the first time in Test history two innings by the same fielding team have contrasted this way. Though pleased with how his own twiddlers came out, Root will hope that, like Sibley’s half-century later on, it sees Bess and Leach fly to India with confidence high before the inevitable step up in class.

Root will lose the services of Mark Wood, Sam Curran and Bairstow for the start of the tour and Buttler after the first Test, with Jofra Archer, Ben Stokes and Rory Burns all returning. Wood has earned this rest period after 55 overs bowling 90mph in the heat and, though Curran had a low-key series, Bairstow’s Test return after a year-long absence was not without merit. His highest score across four innings was 47, but two century stands with Root were key to the series win; certainly enough to suggest Bairstow is not done against the red ball, despite trying to change the colour of one during England’s run chase when a six off his bat poetically landed in a barrel of the groundsman’s whitewash.

News is under threat …

… just when we need it the most. Millions of readers around the world are flocking to the Guardian in search of honest, authoritative, fact-based reporting that can help them understand the biggest challenge we have faced in our lifetime. But at this crucial moment, news organisations are facing a cruel financial double blow: with fewer people able to leave their homes, and fewer news vendors in operation, we’re seeing a reduction in newspaper sales across the UK. Advertising revenue continues to fall steeply meanwhile as businesses feel the pinch. We need you to help fill the gap.

We believe every one of us deserves equal access to vital public service journalism. So, unlike many others, we made a different choice: to keep Guardian journalism open for all, regardless of where they live or what they can afford to pay. This would not be possible without financial contributions from those who can afford to pay, who now support our work from 180 countries around the world.

Reader financial support has meant we can keep investigating, disentangling and interrogating. It has protected our independence, which has never been so critical. We are so grateful.

We need your support so we can keep delivering quality journalism that’s open and independent. And that is here for the long term. Every reader contribution, however big or small, is so valuable. Support The Guardian from as little as $1 – and it only takes a minute. Thank you.