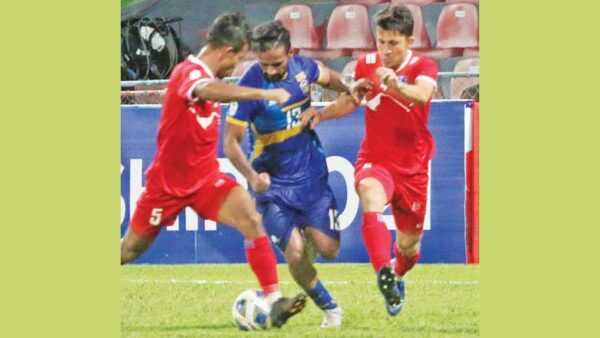 Sri Lanka footballers put up a splendid performance before they went down to the top ranked Nepal team which edged them out 3-2 in their 13th South Asian Football Federation(SAFF) Championship held at the National Stadium Male on Monday.

Despite the Sri Lankan players battling side by side in the first half of match under lights, Nepal, who were ahead in terms of experiencea nd speed extended their dominance in the second half to secure a narrow win by a margin of one goal.

However, with the defeats to Bangladesh and Nepal, Sri Lanka’s hopes of reaching the final were unfortunately shattered and should now concentrate in winning a game . The Sri Lankan team has to face this fate with the remaining matches against India on the 7th and Maldives on the 10th. Nepal led 1-0 in the first half with Suman Larna opened the scoringi n the 33rd minute with a neatly executed kick which Skipper Sujan Perera failed t ofoil . Nepalese further increased their lead through striker Anjan Bista who booted a goal in the 51st minute of the game in the second half before Mervyn Hamilton broke the shackles for the Lankans by firing a 35 metre power packed kick from the centre field which foxed the rival goalie in the 57th minute to reduce the lead 2-1.

This changed the complexion of the game with both sides players ran circles to find space to increase their lead. Ayush Galan was instrumental in netting the Nepal’s third goal in the 86th minute which the Lankans conceded due to a defence lapse to be 3-1. The last 15 minutes of play some anxious moments under pressure. Dillon de Silva converted a penalty kick offered to Sri Lanka after a Nepal player was penalized for dangerous play.

According to the technical aspect of this match, Nepal and Sri Lanka have made 10 equal attempts at the goal out which Sri Lanka had 2 and Nepal had 7 instances.