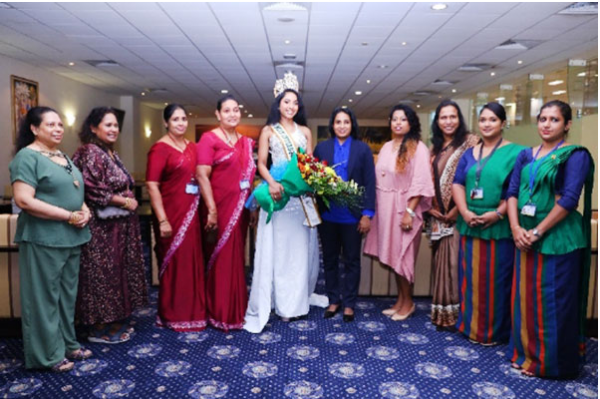 Born to Sri Lankan parents, Miss. Evanjelin Elchmanar can be considered as an asset to Sri Lanka, since she was the first woman of color to win the prestigious Miss International UK title. She will be representing the United Kingdom in the 60th Miss International beauty pageant in October this year, one of the big three competitions alongside Miss Universe and Miss World. She will be visiting Sri Lanka on the 3rd of February 2022, and the main purpose of her visit is to join hands with Sri Lanka Tourism and make her contribution to promote Sri Lanka in the UK. She is a British citizen hailing from the City of Birmingham and she was able to win this achievement competing against more than 50 other British Individuals.

Since She is very much into charity work from her much younger days, some of her main initiatives of visiting Sri Lanka is , to build dream homes for the poor, funding various school projects, creating awareness against domestic violence, creating awareness about women’s empowerment, creating Awareness to stand against climate change, promoting sustainable living and organic culture, promoting Sri Lanka as a destination via social media channels, to name a few .There are more to come down the pipeline. Her contribution will certainly enhance the Tourism promotion campaigns which Sri Lanka Tourism is currently involved in and will further promote Sri Lanka across the world. It is anticipated that through this event, each social media platform belonging to Sri Lanka Tourism, such as Instagram, Facebook and twitter will reach a significant viewership. Ms. Elchmanar also has the idea that through a prestigious organization such as Sri Lanka Tourism, it will be much easier to promote Sri Lanka in the UK and across the world.

She has many experiences and qualifications under her belt, as she has attended the Toronto Academy of Acting for Film and Television, starting computing in Beauty pageants at an early age in 2013. She also played for Birmingham’s under 18 basketball team, performing in an international dance group from 2007 -2015. She was also a member of the Aegon Classic ball crew in 2014, raising 80,000 for numerous charitable organizations.

Evanjelin’s father is a businessman from Batticaloa and her mother who is from Galle, worked as a community development worker in Colombo. She has two elder brothers namely, Jonnes Elchmanar who is a doctor, and Walter Elchmanar who is a chemical engineer. She has planned and will be implementing new charity projects and hopes to launch her new website www.climatexchange .art .She also had the privilege of working with brands such as Mac , L’Oreal , Revlon , Panasonic and Dyson, which further highlighted her role as a fashion icon.

Sri Lanka Tourism envisage this as an opportunity to showcase the country as a safe and secure destination for post-pandemic UK travelers by creating a positive attitude about the country and enhancing their knowledge and awareness about tourism products and freedom of travelling in the country in the new normal. SLTPB intends to send out this message to travelers in the UK to grow their confidence to visit Sri Lanka which will eventually contribute to the increase of UK travelers and growth of the tourism economy.