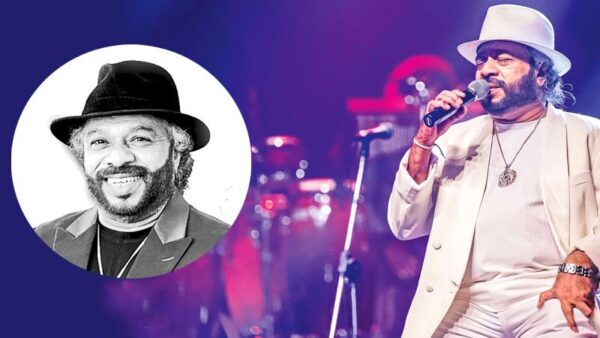 The island bid adieu to Sunil Perera, one of the highly acclaimed and renowned stalwarts of the Baila genre of Sri Lanka. Albeit Sunil Perera is no more, the legacy that he left behind would remain in the annals of Sri Lankan music forever. No hyperbole remains in declaring that Sunil was undoubtedly and indisputably a giant, whose colossal and genuine potential and capacity in music do not need an introduction; it is ubiquitous and well known both among the Sri Lankan music fans and critics alike. 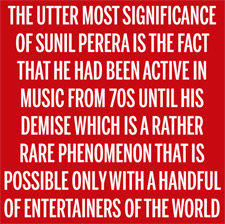 Sunil Perera was the synonym of “The Gypsies” and “The Gypsies” are a synonym for the tradition of music groups in Sri Lanka. “The Gypsies” were a brainchild of Sunil’s father whose influence on his music carrier remained a blessing. The Gypsies and Sunil Perera are a household name in every nook and corner of the island.

Speaking to the Sunday Observer, an eloquent and eminent writer and art director, Dileepa Abeysekara fondly recollected his memory on a certain “house party”, held way back in 1970s, as he was barely five years, where the very young Gypsies performed rather professionally. Abeysekara while indulging himself in a wistful and pleasurable nostalgia further noted that it was a wonderful evening, hugely crowded during which ‘The Gypsies’ showcased their enormous potential in singing and that was their very initial days of singing. The iconic and outstanding “The Gypsies” marked their 50th year of music in 2020.

Abeysekara noted that the untarnished fame of ‘The Gypsies’ was persistently carried by the able and far-sighted leadership of Sunil Perera who truly represented the band. Abeysekara further pointed out that the utter most significance of Sunil Perera is the fact that he had been active in music from 70s until his demise which is a rather rare phenomenon that is possible only with a handful of entertainers of the world.

Abeysekara remarked that Sunil was an exceptionally outstanding musician who could continuously gave the most able leadership which kept ‘The Gypsies’ going. Sunil was blessed with an intrinsic knack where he truly felt the heartbeat of his audience which was often packed with his fans consisted of people coming from different works of life; he sang to the people, regardless of cast, creed, race and religion. Abeysekara remarked “he never failed to put a smile on the faces of the Sri Lankans.

The magic about him is that he could stage the relevance to the audience”. “Ojaye and Kurumitto”, his ever popular classic, wherever played took the entire audience spellbound. Meanwhile, “Thaththa mata anapu tokka dawale tharu penuna” made an enormous impact on the society, the young people in particular.

Abeysekara further said, “it touches the heart of everybody who has had an argument with the father. Anyone from any works of life could understand what he sang”. “Signore, Bus aka magadi keduna, Saima cut wela” are a few of Sunil’s well received and highly remarkable songs. 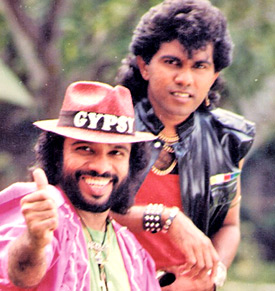 “The clarity in his pronunciation was the authenticity about his voice”, Abeysekara noted. Sunil was a remarkably excellent performer of par excellence and could unarguably stand along with any other versatile performer in the international arena. Abeysekara declared “Sunil had a magnetic personality which only a handful of artists have got. His songs were sung for everyone in the society.

As he sang, you end up watching him. He was a fearless singer who was outspoken. He could always hold a crowd, house full of strangers into his singing”.

Sunil was a lyricist, composer, performer and entertainer. In all those capacities, he demonstrated the artistic charisma of a professional artist.

“Apart from his own lyrics, he sang the lyrics of outstanding lyricists in the island and among whom the biggest contribution was made by Hemasiri Halpita”, Abeysekara remarked. If Baila were a language, Sunil was the metalanguage that translated the language of Baila in Sri Lanka. Sunil’s boisterous high spirits in Baila singing was overwhelming.

Abeysekara noted “Baila is of different scale and style; Baila tunes from Sri Lanka is a style of music that has travelled effortlessly to the world where the contribution made by Sunil is of great prominence”.

Sunil had been a celebrity with a well-known Commercial voice right through out. He often remained as one of the most sought after voices in the sphere of advertising. “But, he never made money for living as an entertainer”, Abeysekara remarked. Abeysekara specifically made a mention on his children, particularly a son and daughter whose potential in music is tremendous and Sunil’s fans would be optimistic that his children would continue to follow his path.

Sunil Perera demised at a crucial time where his presence in the sphere of Sri Lankan music is highly felt.

“We desperately need personalities in the calibre of Sunil. His demise is an irreparable loss to Sri Lanka” Abeysekara concluded.