Tomb stone of Dr Hayman at Bournemouth – Warden of St Thomas’ College – A man who was a real benefactor of S. Thomas’ Mount and Gurutalawa –
by Renuka De Silva

Video prepared by Renuka De Silva who is Mr Frank De Silva’s (ex Board of Governors of STC & IGP) daughter.

Tracing the tomb stone of Dr Hayman at Bournemouth by Renuka was a massive task, digital, geographical, physical exercise, and much else in acceding to Mr De Silva’s request. 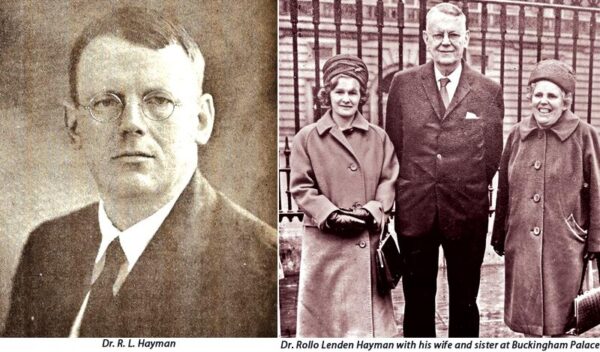 Rollo Lenden Hayman MA, DPhil (Oxon), MBE, was born in London on December 14, 1902. He was the son of William Hayman, a General Practitioner. The family later moved to Bournemouth on the south coast of England. Dr Hayman was the founding father of S. Thomas’ College at Gurutalawa. 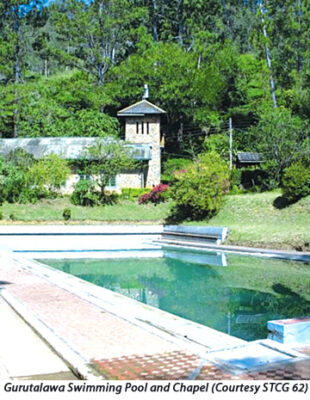 About 1919, Hayman was admitted to the University of Oxford to read Physics. When he graduated, he decided to continue studying in Oxford and obtained DPhil in Physics.He decided on a teaching career and trained as a Teacher for Ministry in the Anglican Church.

K. C. McPherson, the Warden of S. Thomas’ College from 1926 to 1930, visited Keble College, Oxford in 1928. He persuaded Dr Hayman, Rev. A J Foster and W. T. Keble to join S. Thomas’ College. Keble College, Oxford, founded in 1870, was named after W T Keble’s great-uncle, John Keble. In 1938, W. T. Keble founded S. Thomas’ Preparatory School in Kollupitiya. This was the first Prep School in Ceylon. In 1942, during World War II, the Navy commandeered the School premises and Keble moved to Bandarawela and founded the S. Thomas’ Prep School. He was also a writer and author of books, including the travel book Ceylon Beaten Track.

When Dr Hayman told his parents he was going to Ceylon they were against it, saying that his education may well be wasted. Dr Hayman contacted the Society for the Propagation of the Gospel in Foreign Parts and they told him that Ceylon was working its way to independence and needed good teachers to produce men who could lead the country. (Prime Ministers who led the country, educated at STC were D S Senanayake, Dudley Senanayake and S W R D Bandaranaike.) As Dr Hayman said, “To this end anything I could teach in England would be equally useful and acceptable in Ceylon. So, in the end my parents rather unwillingly allowed me to follow my wishes.”

S. Thomas’ College was founded in Mutwal in 1851 by Bishop James Chapman, an old boy and Master at Eton College, Windsor, and graduated from Cambridge. Eton College is arguably the most prestigious private school in England and Bishop Chapman wanted to model STC along the lines of his former school. Both schools have the same motto, Esto Perpetua (Be thou forever). Boys in the highest class at S. Thomas’ were treated more like undergraduates than schoolboys and addressed as ‘Mister’. Warden Baly said of his students “Were it not that their Latin Composition is deficient, they would be on a level with the average Oxford Undergraduates in their second year.”

Mount Lavinia
In 1918, the decision was made to move the school to Mount Lavinia. Hayman arrived in Mount Lavinia in 1929, and was the first Master in any school in Ceylon who had a Doctorate.

He also started a stream of donations to the College. His father was a General Practitioner and had a portfolio of investments which Dr Hayman inherited. He donated a set of fives courts in 1931, the first in any Ceylon school. In 1933 he donated a swimming pool, the first for any school in Ceylon.In 1935 he was appointed Sub-Warden of the school.

At Mount Lavinia, the school had embarked on a building program,financed by the issue of debentures with 6 percent interest and in the 1930s the school found it difficult to meet the instalments. Hayman helped by giving donations. In 1930 R S de Saram was appointed as Warden. He was the first old boy and Ceylonese to be Warden. He also had studied at Keble College, Oxford and won an Oxford Blue for Boxing.As Warden de Saram said “What Dr Hayman has given to the school nobody knows.” Hayman purchased the house named “Thalassa”, on the adjacent beach and gave it to the College for use as an Office.

In April 1942 the Military inspected the School and gave five days to vacate the premises as they wanted it as a Military Hospital. The school was broken up into sections and had classes sharing premises at St Paul’s Girls School, Milagiriya; at Girls High School, Mount Lavinia; and at Kingswood College, Kandy. The fourth premises was to start a new school at Gurutalawa.

Leslie de Saram and his wife owned a farm of about 35 acres at Gurutalawa, five miles from Welimada. Leslie, an old Royalist, was a cousin of Warden de Saram. When they heard that STC was short of accommodation, they promptly donated the entire Farm to the College. It was a generous donation and they refused to allow their names to be mentioned on the plaque commemorating the donation, it merely says “From two well-wishers”. 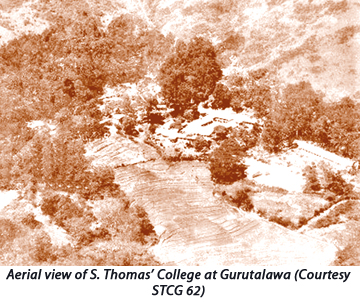 Dr Hayman was appointed the Headmaster of Gurutalawa in April 1942 and had to arrange accommodation for 50 students. For Hayman, it was a heaven-sent opportunity. He wanted to fashion the school after Gordonstoun, the famous school in Scotland where the Duke of Edinburgh and the Prince of Wales studied, which had an emphasis on outdoor life and inculcation of the spirit of adventure.

Gurutalawa has outdoor activities not generally found in other schools in Sri Lanka such as long distance hiking, horse riding, bird watching, involvement in the farm activities and so on. A typical hike was the day trip to World’s End, in Horton Plains. This meant setting off from Gurutalawa at daybreak and returning at dusk after having hiked 50 km (30 miles) in mountainous terrain.

Hayman’s immediate problem at Gurutalawa was to prepare temporary accommodation and classrooms. He also started building a small swimming pool at his own expense. The school started functioning and over the next four years permanent buildings for dormitories, classrooms, dining hall and the chapel were built.

Mary Rudd was a member of the Nursing Staff of the Military Hospital which occupied the Mount Lavinia premises. Towards the end of 1945, Dr Hayman went to England on furlough and he and Mary got married there. He returned to Gurutalawa only at the beginning of 1948, after an absence of two years, and remained there until he retired in 1963.

He enlarged the swimming pool into a full-size swimming pool. A filtration plant and diving boards were installed. Everything was at his own expense. Allan Smith learned his diving as a student in S. Thomas’ and later represented Ceylon at Diving in the Olympics.

One day, a foreigner was spotted visiting Hayman. One of the boys asked Dr Hayman whether it was Sir Ivor Jennings, the Vice Chancellor of the University of Ceylon who visited him. He said “Yes, it was, and it is the third time he has come to see me. Each time he tried to persuade me to join the University as Professor of Physics and each time I gave him the same answer: that I find it far more challenging to mould boys into young men of character than lecture to undergraduates.”

Hayman continued to teach Physics and Maths, but the writing was on the wall! The medium of school education switched to Sinhala and Tamil. There were insufficient students for an English stream at Gurutalawa. His usefulness as a school teacher in Ceylon was over.

Hayman retired on March 14 1963 and returned to his home in Bournemouth. He and Mary did not have any children and he donated lavishly to the College from his inherited wealth. The first 21 years, the golden years of Gurutalawa, were over. The school has continued to flourish and expand since then and last year celebrated its 75th anniversary.

In 1970 he visited Gurutalawa to open the new Hayman Science Laboratory, to which he had contributed generously. The plinth in the building states simply “To spend and be spent in the service of others is his greatest privilege”. Dr Hayman’s final visit to Gurutalawa was in 1983 to open the Keble Dormitory, the cost of which had been met by Dr Hayman. The Income Tax Department slapped on a charge of Gift Tax. It was an irony which appealed to his considerable wit. Dr Hayman passed away on May 7 1983 at the age of 81.

His funeral was on May 12 in Bournemouth and the funeral service was by Rt. Rev. Lakshman Wickremasinghe, an old boy of Gurutalawa and Keble College, Oxford and uncle of Prime Minister Ranil Wickremesinghe. The opening sentence of Dr Hayman’s Last Will was, “I direct that my funeral shall be of the cheapest kind consistent with decency and no expensive memorial stone should be erected.”

The writer is domiciled in Australia