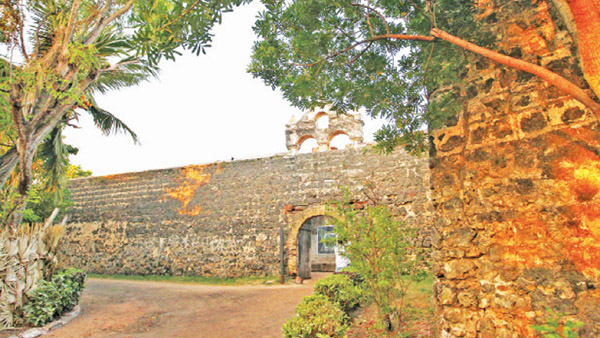 The coastal areas of Sri Lanka have some stunning historic forts. Some are massive and imposing. Other forts are not that big but served their purpose of a fortified defensive bastion. With the tranquil Puttalam lagoon opening out to the sea, Kalpitiya is one of the most beautiful destinations in the country. A cluster of 23 islands, 14 of which are major islands, enhances the appeal of this resplendent location.

A few metres from the main town is a historic architectural gem – the Dutch Fort. As we entered through the main gate of SLNS Vijaya, the naval quartermaster greeted us and directed us to the fort. The first view from the right side of the Base is the majestic rock wall that has stood here for three centuries. The cool breeze of the lagoon was refreshing. A sailor accompanied us to this historic fortified structure. The fort is not large like Fort Fredrick in Trincomalee or the massive Dutch Fort in Galle; yet we would soon discover its defensive elements that helped it achieve its security objective.

The arched-entrance has two large wooden doors, which is the only point of entry. Above the arch is a pediment which is common in Classical and Baroque architecture. I noticed the emblem of the Dutch East India Company – the letters ‘VoC’. The fort’s crest displays two elephants that signify strength and a palm tree in the centre as a reflection of prosperity. The year 1676 is engraved on the wall. Old records say that before this fort was built here there was a small chapel built by the Portuguese priest of the Jesuit Order. The Portuguese had arrived here in 1544 and named the area as Kardiv Island. The priests from the Jesuit Order served and lived here. Later on, the Dutch moved into this area and called it Calpentyn. They set their sights on the lucrative cinnamon trade which was bountiful in the Puttalam area. By 1666, they managed to chase away the Jesuit priests and began to build this fort. The Dutch initially informed the king that their intention was to build a church, for which he kindly granted permission.

However, they were quite cunning. They began building a fortified structure using granite rocks and coral stones. In fact, they did not build a church on this site. Once the fort was completed in 1676, they added three cement crosses on the topmost walls (one on the entry gate) to misguide the king and other potential seaborne foreign enemies that this was only a fortified church. After building other majestic forts along the coastal areas, I wondered, why the Dutch would want to conceal the presence of this fort. But, as we explored this mysterious building it was intriguing to understand their security perspectives from a bygone era.

The prudent Dutch engineers had deployed their second security feature to fool the enemy. To understand this we must realize the mode of seaborne assault in that era. An invading ship would fire her canons at the fort well away from the shoreline – focusing on the spot where they believed the troops would be gathered, before sending in ‘landing parties’ to physically raid the fort. In order to misdirect such fire the Dutch engineers had put up four large granite columns, and erected triangular-shaped walls on top of them, that gave the illusion of a church from a distance. This misleading structure is about 75 metres long. When the enemy fired, there was nothing of significance here and the cannon balls would land and explode onto a large open field. The field is in the centre of this old fort. 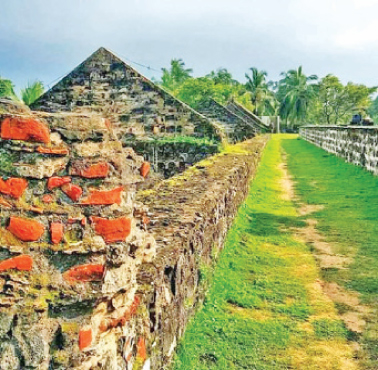 We climbed an angled ramp that took us to the ramparts. The walls were about eight feet wide and interspaced with gun turrets. The top of the walls are sloped to reflect a 20-degree angle – a defensive tactic where under siege, Dutch sailors would pour hot oil that would burn anyone trying to mount the walls. Back in the day, there were five bastions on this fort.

Four at the edge of each side and the fifth was placed outside the fort – forming the outer perimetre defence. There were 16 cannons on the wall directed towards the lagoon and 14 cannons aiming at the landside. Unfortunately, with time, not a single canon is found today. Naval sources assume that each gun had a two-man crew. Thus, there would have been 60 Dutch men who manned these 30 guns, making this a formidable fort with a destructive fire wall. In addition, there would have been another 20 men working as cooks, clerks, horse keepers and storekeepers. We descended some steps and encountered a tunnel.

The Kalpitiya Fort has two tunnels, one leading to the sea and the second leading to the old Dutch church. The first is on the left flank of the fort. As we entered it was almost pitch black and some large bats excitedly made their exit. Using our mobile phone lights, we were able to see the tunnel which runs to a length of about 10 feet, before it had been sealed decades ago. There is some speculation as to where it exactly leads. The second tunnel is even more mysterious and is adjacent to the fake church structure. It is believed that it definitely went past the shore connecting the fort to a nearby island.

It was a tunnel for a tactical retreat in case of an intense assault. The other buildings in the fort include a commander’s residence, dining hall, armoury, two prison cells and a storeroom. Drinking water was obtained from two wells. Years after erecting the fort the Dutch did build a real church for worship about 400 metres away from the fort, in 1706. The church belongs to the Dutch Reformed denomination, and we took time to visit the church in the evening. The old belfry is still standing. By 1795, the British took control of this fort.

Initially, a naval detachment was set up here in 1973 to guard the lagoon and in 1982, this Base was commissioned as SLNS Vijaya. In the Dutch era, this was a vital trading point. There were boats that took cinnamon from here to Puttalam and then ferried via Hamilton Canal to the Colombo Port. For many years, the Navy has maintained this beautiful fort, protecting its historic value. On weekdays prior to the COVID-19 pandemic outbreak, busloads of schoolchildren would visit this fort on study tours. Tourists also visited this fort. The Sri Lanka Navy has done a commendable task by teaching the visitors about the maritime history of old Ceylon in Kalpitiya.

Towards late afternoon, I boarded a boat with a naval petty officer and set off to discover some of the islands. These lush islands are home to a variety of marine bird species. We went to one particular island where it is believed the tunnel from the fort emerged. We got onto the island with much expectation. The place was partly covered by mangroves and I noticed many tropical birds nesting amidst the clusters of trees. A snake slithered into the network of roots. I walked with caution but there was no trace of the tunnel’s exit point, perhaps it has been sealed by nature’s own process. On our return to the fort, I realized that the formation of islands around this fort could easily mislead a first-time visitor, thus concealing the real presence of this ancient formidable Dutch Fort. The view of the sunset was a bonus. 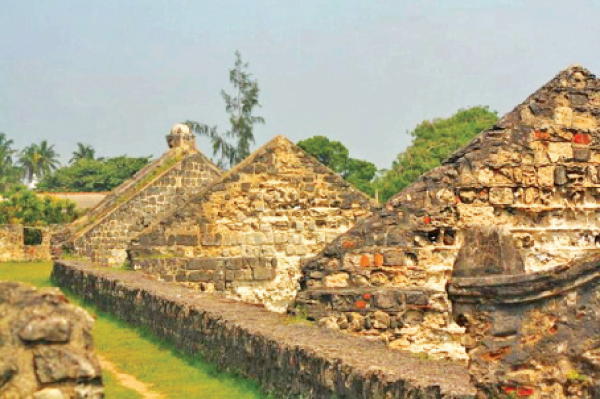 Side view of the old Dutch church