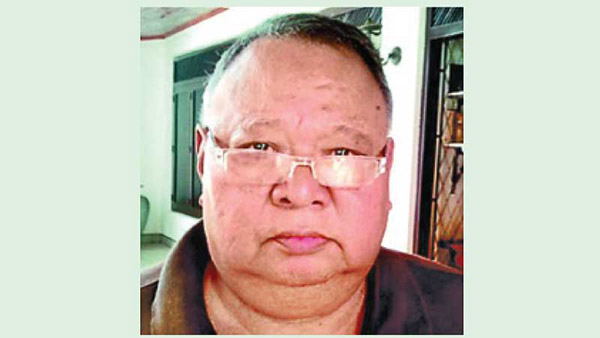 Y.C. Chang can easily be considered as one of the greatest ruggerites of all time in this country with an excellent track record, both as a player and administrator . He started his schooling at Carey College, Colombo and later came to Kandy as he knew this was the correct place to continue his studies and sports. He joined Trinity College, where he excelled in cricket as a ‘stumper’ at junior level and played junior rugger under the guidance of Hilary Abeyartne, but never played for the first XV rugby Team.

At club level, Chang can be rated as one of the best front-row forwards the country has seen. Records reveal that having played U/17 for Trinity College in 1959/60, he went over to Havelock Sports Club during the year 1961/63, thereafter he joined Kandy Sports Club in 1964 while he was a professional tea planter in the district of Kandy from 1964 to 1970 and captained the Kandy Sports club in 1967 and 1968, and also captained Up-Country in 1968 and 1970. While in Kandy, he was secretary of the Kandy SC in 1968 while being a player. In 1971 he left for Colombo for employment and joined the CH & FC, representing the club as player and coach, captaining the side in 1972 and winning the League title that year. He captained the Low- Country Clubs and the National Team at the Asiad in 1972.

‘YC’ as he is fondly known, played for Havelock S.C from 1961 to 1963, he was in Dr. Hubert Aloysius’ champion team that beat Dickoya-MCC in the last second of the game, off a penalty-kick at goal by a Kandy product Ken de Joodt in the Clifford Cup final.

He played for Kandy Sports Club from 1964 to 1971. From the very first year at Kandy SC he played for Sri Lanka as number one prop row forward, but until he went down to Colombo, he never got an opportunity to lead the National Team. After an excellent and enjoyable stint with Kandy SC where his rugby career was at its peak, he was compelled to cross-over to CH & FC after giving up planting.

It was due to his dedication and keenness, without playing for school, he played club and national rugby. It was mainly due to his great commitment, knowledge, authority and leadership qualities combined with performance on the field which led him to become the country’s best forward. What Trinity lost, it was at Havelock SC that he gained to be recognized as a top player at that time.

At Havelock SC , he played along with great players like Nimal Maralande, Dr. Hubert Aloysius, Ken de Joodt, Mike de Alwis, Conrad Ephraums, Maurice Anghie, Dr. Trevor Anghie, G. Sumanasekera and Gamini Fernando to name a few. It was at Kandy SC where he earned a name as an excellent player and leader. ‘YC’ during his playing days, weighed 165 pounds, he was a fearless player leading the side from the front. He led the side in1967, 1968 and 1970 half way that was after the late Lt. Gen. Denzil Kobbekaduwa was recalled to the Army.

YC represented the All-Ceylon team from 1963 to 1969 in the famous “All India” tournament.

In 1969, it was ‘YC’ who helped the Nittawela Club to enter the Cup final,when late Denzil Kobbekaduwa led the side with Maurice Perera as the coach, some of his teammates were: Gavin Stevens, Mohan Balasuriya, Dr. B. Makuloluwa, Rohan Abeysundera, Deepal de Soysa, Jadi Dissanayake, Gamini Abeyakoon, Jayantissa Ratwatte, Cyril Aluwihare, S.Piyasena, Lakshman Samarajiva, Chang Fa Ching, then in the Clifford Cup knockout, Shafie Jainudeen, Iswan Omar and Frederick Prins from Trinity College as schoolboys were invited to play for Kandy SC when Denzil Kobbekaduwa was their coach.

‘YC’ represented the All-Ceylon Barbarians team at the age of 18 years. He was in the team of the first Asiad in 1970, which side was led by the other ‘prop’ forward Nizar Hadji Omar. In the very first year of the Asiad, Lankans came up to the semi-finals.

In 1971 the year he left Kandy SCand joined CH & FC, he got the break to lead the country and became the second captain of Sri Lanka at the 2nd Asiad in 1972. During the time of ‘YC’s national duty, he played against London Welsh, which side was led by John Dawes. In 1969 he played for Bosuns, then in 1970 he played for Blackheath of England, 1971 Paris University, 1972 Emus from Australia.

After his playing days he took up coaching and refereeing. As a coach he helped CH & FC team in 1982, under N.H Karunasena they won the Clifford Cup, and in 1983 they remained unbeaten. ‘YC’, at Kandy SC was a player, coach, committee member, secretary and later an Life-member. Then at CH & FC, was the coach, committee member,chairman of the club, from there he became the President of Havelock SC and a life-member of both clubs.

He was a stalwart of Sri Lanka Rugby for many years, rated as one of the finest Presidents of the Sri Lanka Rugby Football Union with a vision towards rugby development. It was at that time ‘YC’, made a wise move by bringing the Clifford Cup tournament to Kandy.

This helped Kandy SC and the schools in Kandy in a big way and today Kandy SC are the king makers of rugby. He had a good set of committee members like Dushy Samarasekara, Malik Samarawickrema, Gamini Fernando, Lionel Almeida, Kishin Butani who were all rugger promoters, who gave him the fullest support, It was under his Presidency that the first Sri Lanka under 20 teams played in the 5th Pan-Pacific Championship in Taiwan and the under 25 team took part in the Inter-Collegiate tournament in the same country. There were no sponsorships to send teams out but through innovative ideas he raised funds to accomplish his vision.

Another tour to Wales and South East Asia was arranged, Coaches, Referees too, got a break with his initiative. For all his good work he was elected as the President of the Asian Rugby Football Union, and he hosted the Asiad in Colombo at Sugathadasa Stadium in October 1990.