A long time ago, on 01 April 1881, Royal College (then known as the Colombo Academy) in Mutwal, Principal Mr John B Cull started a School Cadet Platoon. The idea was to train students on drill so that they would be more disciplined. Mr Cull believed such students would become responsible and disciplined men when they grew up. He received unstinted support from the then British Lieutenant Governor and Commanding Officer of Ceylon Light Infantry (CLI) (Volunteers), which started in the same year and consisted of British Officers and largely Burghers as soldiers. Lieutenant Colonel John Scot Armitage was the first commander of CLI (V).

When World War 1 started in 1914 in Europe, volunteers were called from Cadets and Cadet masters. 330 volunteers from above mentioned four schools were ready to sacrifice their lives for King George V and for the British Empire. Our cadet group from these four schools consisted of 186 Burghers, 95 British/ Europeans, 41 Sinhalese, five Tamils, two Malays and one Colombo Chetty. About 105 of them were killed in action.

The book, “Volunteers from Ceylon – who served in British Forces during World War l (1914-1918) and World War ll (1939-1945)” has recently been compiled by Group Captain (Retired) Kumar Kirinde, yet another Royalist; the project was support Brigadier Hiran Halangode (Retired), Wing Commander (Dr) Narme Wickramasinghe (Retired), Major Anton Edma (Retired), Chief Petty Officer Quintus Andradi (Retired) and Mr Sidath Abeywickrama. The book contains information about the school cadets who volunteered to serve in the British Army. Most of them were recruited as officer cadre as they were fluent in English. The Royal College contingent was the largest (88). Out of them, five were killed in action, 13 wounded in action and three taken as prisoners of war by the Germans. The first Ceylonese to pay the supreme Sacrifice was young Royalist W E Speldewine, who drowned when French Troop Carrier “SS Villa De-La Ciotat” was torpedoed by a German Navy Submarine on 24 December 1915 in the Mediterranean Sea.

Today, more than 120 schools have Cadet platoons attached to Battalions, determined as per administrative districts. The Royal College Cadet platoon has been attached to the Third Battalion. The District Judge Badulla, Mr Herman Loos in 1917, presented a beautiful trophy to be awarded to Best Cadet platoon in Sri Lanka in an annual competition. 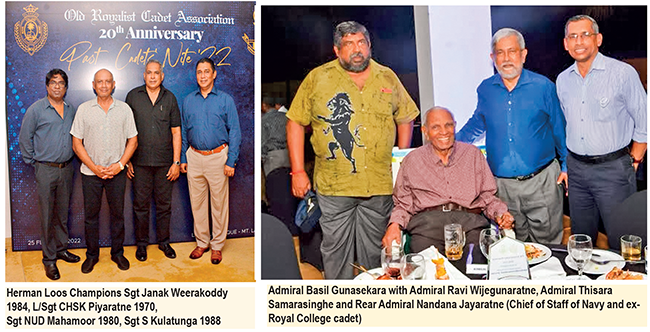 However, during the last 105 years, (from 1917), the Royal College Cadet platoon has been able to win the Herman Loos trophy only a few times. That was in 1963, under Sergeant Manik Jayakumar, in 1970 under late Sergeant M R Moosa, in 1980 under Sergeant Naeem U D Mahamoor and in the Centenary year of Sri Lanka Cadetting, in 1981 under Sergeant Pradeep Edirisinghe.

Yours truly was the senior Corporal of 1980 Herman Loos winning platoon!

In 1982, 1984, 1985 and 1988 the Royal College Cadet platoon won the Herman Loos trophy, but not in the recent past. In 1966, Sgt Jayakumar’s brother Sgt Panithakumar was adjudged ‘Best Commander Cup Squad Drill” commanding in Sinhala. Great achievement for a Tamil boy!

It was a marvellous gathering of former Royal College cadets. It’s always nice to see senior citizens of our nation interacting with the young generation of Royal College Cadets.

We missed one person-––present Navy Commander, Vice Admiral Nishantha Ulugetenne, who was on an official visit to Russia. He was a legend in Royal College Cadetting. Member of two Herman Loos-winning platoons. He rose to the rank of RSM of Third Battalion, but prefers to say he was RQMS.

The story is that in 1985, he was appointed new RSM of the Third Battalion and received the appointment letter from the Royal College Principal. When he reached home with this good news, another of good news was awaiting at home – to say he had been selected as a cadet officer to the Sri Lanka Navy and for him to report to Navy Headquarters the following day for enlistment and training.

He returned to the College and stepped down from his post as RSM of the Third Battalion.

I am sure that during the past 140 years Royal College Cadet Contingent has lived up to Mr Cull’s expectations.