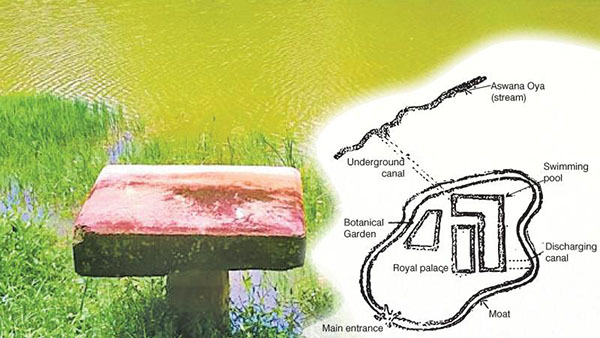 Gampaha is a district with important heritage sights. The Maligagodella Uttararama Purana Vihara of Udugampola holds a special place among these, since many archaeological remains and features of the Udugampola Sub-kingdom of the Kotte kingdom are still to be found in and around this site.

The area of the vihara in the Minuwangoda Division was called Dasiya Paththu of Uthuru Aluthkuru Korala in the past. Ancient texts of Rajavaliya and Alakeshwara Yuddhaya cite that there was a sub-kingdom reigned by King Sakalakalawallabha, son of King Veera Parakramabahu in the area.

The location where the Vihara stands was the location of the Royal Palace of the sub-kingdom. The remains of the royal pond and protective moat can be found around the vihara. Names depicting various tasks and services attached to the royal palace are found from surrounding areas. Maligagodella was where the Royal Palace stood. Kehelbaddara was the place where Kehelibandirala (royal flag bearer) used to live.

Udugampola was where prince Utthiya stopped, having travelled upstream of (Udugam Bala) the river. Veediyawatta was the promenade where the annual royal parade of Sakalakalawallabha took place. A place where a small stream fed into the royal water garden is Dolaagatha. (Dola – small stream) and a place where the king rested twice a day is Devalapola. The place where the highest granaries of the king’s treasury stood is called Maabodala (Maha Budalaya – Great Treasury).

Two places close to Maaligagodella are Maabodala and Aswana. A rivulet off of the Maabodala tank was crossed with a Dam (Wana) at Kalawana and the exit Dam was named Aswana (Exit Dam – As wana) Maabodala, Maligagodella. Aswanas are said to have had royal palaces and the royal pond is said to have been fed by the Aswana Dam. Remains of this Dam can be found to date. The consort of King Sakalakalawallabha is said to have committed suicide by jumping into the Aswana Dam. The place where the queen’s jewels (mini ruwan) were found is Minuwangoda and her head was found at Galoluva (Oluva – head) while remains of her innards were found at Bokkamulla (Bokka – Intestines/innards). The royal goldsmiths and jewel makers were said to have lived in Hendimahara. A place where many fish of the variety called pethiya in Sinhalese were said to have been found – as a result of a flood in Kuda Oya- is named Pethiyagoda. Relatives of the royals are said to have lived at the city entrance in Doranagoda and reptiles for the royal family were bred at Naiwala. The King’s flower garden is said to have been at Pitakotuwa and farmers who cultivated paddy for the king are said to have lived at Govigama.

Udugampola and surrounding areas hold great historical value and attest to a well established sub kingdom. The style of reign in the Kotte era was to divide the kingdom into parts, allowing the royal princes to reign over a particular area. During the 16th century, the Kingdom of Kotte was divided into five areas. The area including Kotte and Colombo was ruled by the King Veera Parakramabhahu VIII. Specified tasks and professions were divided among various clans. The King’s Parasol carriers were called Muthkudawijesuriya. Warriors were called Ranatunga. Accountants were called Hetti Pathirana and advisories were called Bamunuarachchi.

These were assigned by the King. Pottery, Jewelmaking, Astrology, Drumming were all assigned to various clans, displaying clear stratification. Due to the symbiosis of these tasks and relevant clans, the sub-kingdom used to be a self-sufficient entity. However, these traditional enterprises are on the decline, due to challenges brought about by many changes in the economic and social structures. The area originally belonging to the royal palace has receded into two acres from a square mile, giving way to new development projects, housing and various political needs.

The geographical boundaries were as follows

The first written evidence on Udugampola and its sub kingdom therein is found in a text called Alakeshwara Yuddhaya a sub text of Rajavaliya (Suraweera; 1965). It has evidence of Udugampola Sub Kingdom. ‘Thereafter, the eldest son of the great king was coroneted as the king Dharma Parakramabhahu. Another reigned in Katupitimadampe as Thaniyaan Walla. Another reigned as Sakalakalawallabha in Udugampola. Udugampola can be identified as a sub kingdom surrounding the central Kingdom of Kotte (Suraweera;1965,Suraweer;1977).

Rajavaliya also provides evidence for King Sukalakalawallabha of the Udugampola sub-kingdom and his younger brother. According to the text, the brothers had defeated a foreign threat in the form of Dravidian pearl diver named Adhiraasaraayan Mudaliyar who had operated illegally in Halawatha and claimed elephants by the power of his illegally amassed wealth.

“Name of Mudaliyar who was pearl diving illegally, claimed many elephants to his name, having sailed with many to Halawatha. King Sakalakalawallabha, having heard of this, departed from Udugampola, having won the war, alighted upon Jayawardhanapura Kotte in attendance to the king Dharma Parakramabhahu, was given many accolades and arrived upon his own city.”

The author of the AlakeshwaraYuddhaya states that it is King Sakalakalawallabha who was sent to defeat the coup which arose from SatharaKoralaya against the king. “Upon hearing that the king of Udarata has given rise to many complications throughout Satharakoralaya, King Dharma Parakramabhahu sent for his brother King Sakalakalawallabhu, visited King Dharma Parakramabhahu and alighted upon Udugampola with many praises and accolades.” It is also written in Rajavaliya that it was Sakalakalawallabha who assisted and stood by the King of Kotte when Portuguese arrived in Sri Lanka. He was selected to investigate the nature of Portuguese and report to the king King Chakrayudha.

It is evident that the king undertook this mission with the addition of a name Chakrayudha referring to the same person, as he was instrumental in the protection of the King of Kotte in many instances (Suraweera;1965, Suraweer;1977). Hence the special name Chakrayudha (protective weapon). This can be confirmed through records of the historian Valentine as well. A tablet discovered near Negombo, in Kadirana also attests to the handing of benefits by the new royal palace in Udugampola in which reigned a Sri Vijayabhahu whose predecessor was a Lord Chakrayudha eight years following Sri Sanghabo Chakravarthi in Aluthkuru Korala Udugampola. Evidence especially that of written text can be stated to prove the sub division system of the kingdom and the existence of a Sub Kingdom in Udugampola (Suraweera;1965,Suraweer;1977).

However, the end of the King Sakalakalawallabha seems unclear as recorded evidence on this cannot be found. As evidenced in the Alakeshwara Yuddhaya, Dharmaparakramabhahu calls upon Sakalakalawallabha to rule the kingdom of Kotte, which he does not accept (Maduluwawe 2004). It states that the King Sakalakalawallabha passed the throne to his younger brother and departed to Udugampola once more. “Having considered a few factors, he called upon his younger brother to reign and upon his coronation as Vijayabhahu and handing over the armies and the kingdom to him, alighted upon Udugampola City.” It is proven that the Udugampola mentioned here is the same place.

Reasons for the king not to accept the throne can be perceived as follows;

1. As stated in the Rajavaliya, the king being born of a sister of the consort who was brought in from Keerwella.

2. The king not having married from a royal lineage.

Though further evidence of King Sakalakalawallabhais not to be found, the existing evidence indicates a well structure reign. As historic texts attest, King Sakalakalawallabha was instrumental in safeguarding the Kingdom of Kotte. The remains of the protective moat and royal bath pond indicate the king safeguarded his own sub-kingdom as well. The king’s bath is the largest of the kind to be used by a king. The dam set up to feed the pond is still to be found near the Aswana temple though not in working condition due to blockage in underground waterways.

Two sons of the king attempted to kill him by setting up pointed wooden stick under the bathing pond. But king saved his life. Today, it is a barren land.

The royals of ancient times considered it a priority to safeguard and provide for the kingdom before engaging in their own warfare. King Sakalakalawallabha too was responsible in developing several tanks, such as the Korase Wewa, Nagaha Wewa, Goda Wewa according to legend. Though historical evidence to the end of King Sakalakalawallabha’s reign is not found, it can be assumed that the calamity towards the end of the Kotte Era affected the Udugampola sub kingdom as well.

With development and modernisation, the heritage of the Sub Kingdom of Udugampola which is believed to have been founded in the 1400’s has come to be challenged in many ways.

Weaknesses in heritage management have led to further deterioration of this national heritage that should be secured for the benefit of future generations.

The writer is a Senior Lecturer, University of Kelaniya 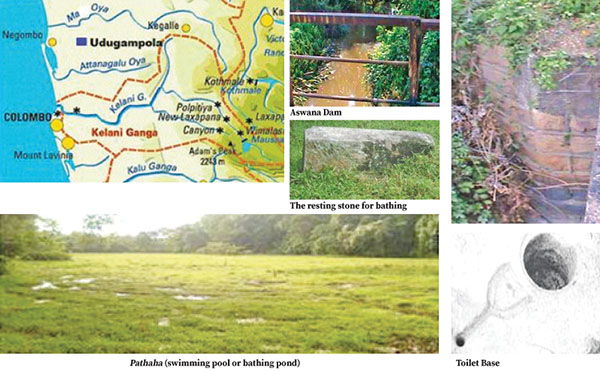