A PLACE TO TREASURE AND REMEMBER 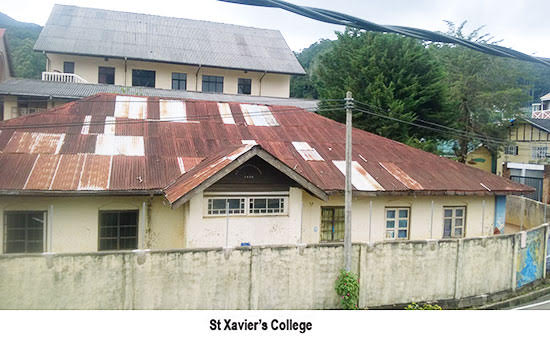 There is a little school, very old in years, nestling at the foot of Piduruthalagala, the tallest mountain in Sri Lanka. This is in Nuwara- Eliya; Little England as it was fondly known in colonial times. When the clock strikes at 8.00 in the morning, the school bell tolls to begin the day’s work and at 2 pm the bell rings again to signal the end of a school day. I do not know how many students are currently enrolled in the school. Maybe around 700, all boys, all day-scholars. I have already said the school is old, but the correct adjective may be ‘ancient’.

The school started in 1859 as the records go; 33 students and a single teacher made up the total. Such was its humble beginning. From then to the present day it has been an unbroken line of service given by St Xavier’s College, which has done its best to survive and cater to the needs of the community. It has rendered yeoman service in the field of education, irrespective of the winds that blew to shake its foundations, be them political, religious, or racial monsoons that periodically battered the walls of St Xavier’s College.

The school withstood the calamities. It may have dents and cracks, but still stands tall. The credit must go to the staunch minority of faithful Xaverians, both young and old, who did their very best to keep the school flag aloft.

The structure at the beginning was almost like a shed, a ramshackle roof for shelter attached to one side of the small St Xavier’s church. This was common for most church schools born at that time. Maybe, they had desks and chairs, but I doubt very much. Probably, there may have had some wooden benches, or more likely, the kids may even have sat on reed mats. What was important in this makeshift equation was the fact that the school admitted all and sundry. With almost equal numbers of Tamil and Sinhalese students, perhaps a Muslim and a Burgher or two may have made up the 33. Today, we have accurate numbers. The Tamil students are the majority at 78% and their Sinhala counterparts are a 20% with a minor representation of Muslims and perhaps a mixed Burgher. The cocktail of races in a classroom could be the best possible catalyst for future racial harmony. Yes, we have a cold peace now; it only needs a cinder to ignite the fire of hatred. Schools such as St Xaviers are the best-known remedy, home-grown deterrents, teaching young minds to respect and understand racial differences.

Historically, the institute was started as a Parish School by Catholic priests, Fr Adrian Bertrand Duffo and Fr John Peter Perreard. Many a cassocked leader took the reins to guide the school as the years rolled by. Student numbers increased, a roof or two were added, and in 1920 it was registered as an English School under the leadership of Rev. Fr Alexander Siriwardena. It was also Fr Siriwardena who initiated the construction of a proper school building in 1920; the school clebrates its 100 years of existence and service to the school this year.

The Siriwardena Block has seen better days. It is time the authorities, either the school or the Education Ministry, made a decision to renovate the building, and gave it a ‘born again’ look to celebrate its 100th birthday. The state it is in now is sad; the Siriwardena Block deserves better.

The Catholic priests bade their farewells and the De La Salle Brothers took over. Their reign came to an end in the year 1961, when schools were taken over by the state. St. Xaviers too was acquired by the state through a gazette notification. That is the simple and fundamental story of St Xavier’s College, Nuwara-Eliya.

I do not think the school has sent anyone to play cricket for the national team. Of course, I know they played football and basketball reasonably well and had talented athletes who took part in all-island competitions. Though St Xaviers had no connection to golf, it was Xeverian-bred golfer K. Prabaharan who outshone them all when in 2003 he won the National Golf Championship and went on to win the All India Championship in 2007. Maybe there are some old boys who completed their tertiary education. All that can be ascertained from the records if anyone is interested. Yes, it is good to have such details, but could we measure the most important factor? The basic education given to Nadarajan, Munidasa, Barthelot and Hameed, and the hundreds who came from different racial backgrounds to sit in one classroom and forge friendships that could last a lifetime? That will always be the invisible silver thread that bound Old Xaverians. Isn’t that worth more than a century scored at Kettarama or a PhD from Texas?

Yes, yardsticks could be different, but there is incalculable value that the little school at the foot of the Mountain poured into those who grew up in its shade.

Perhaps, Piduruthalagala from its vantage view saw the whole story, maybe shed a tear or two for some of the governing absurdities, and yet silently cheered the goodness that existed within the walls of this sesquicentennial institution of education.