Appendix – Excerpt from Chapter 17 of Naan Australian – By Gajalakshmi Paramasivam 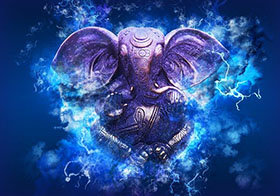 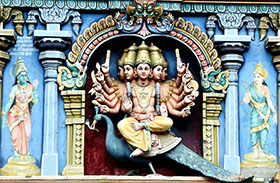 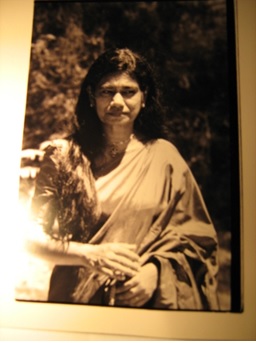 The two sons –Ganesh and Muruga  are invited to participate in the race to go around the world to get the prize mango. Muruga the active junior, immediately takes His vehicle the Peacock and starts on His around-the-world trip.

Shiva for example is personifies Love.  Hence ‘`[fEp civmf / Anpe Sivam (Shiva is Love)’.  The bull outside denotes lust.  Likewise elephant faced Ganesh personifies the intellectual path – as the elephant is known to be the one with deepest memory within the animal kingdom.  The mouse outside personifies hearsay and does as it is ‘told’.  To me Ganesh is Computer and mouse is the mouse used to instruct the computer.  Ganesh is worshipped at the beginning of a venture due to being known as the  remover of obstacles – the way the elephant clears the path for others coming behind him. One who uses his own deep memory is like Ganesh and  one who uses hearsay is like the mouse.  Information that is not written by us would not last long in our memory. Muruga personifies egoless state due to His 360 view.  When we are global / universal – there is no ‘I’ ego in us.  The peacock on the other hand is known to be proud of itself.

Ganesh, who is the thinker – and who would have been at a disadvantage compared to Muruga due to the latter’s ability to fly – compared to Ganesh’s mouse – asked Saint Naradhar whether it was correct thinking that His parents – Shiva-Shakthi stood for the whole world. Saint Naradhar said ‘yes’.  Then Ganesh asked whether it was therefore correct that if He went around  Shiva-Shakthi He was actually going around the world.  Saint Naradhar said ‘yes’.  So Ganesh went around His parents – believing them to be the whole world and Ganesh won the prize mango. To me this is the academic way. But then that works only if their academic gurus are their whole world. In terms of migration – this means also that the senior migrants need to be driven by their intellect and not physical contribution, if they are to retain leadership power.

Muruga on completing His journey successfully, learns that the prize mango had been awarded to Ganesh who completed the journey by His mind, renounces His heritage and establishes His kingdom on Palani Hill in South India. Muruga is known also as the Lord of Democratic era for this reason of physically observing – and hence ‘objectivity’ in democracy. Hence this accommodates juniors / minorities who would actively observe a matter from all angles before they make decisions – as in Do It Yourself way.