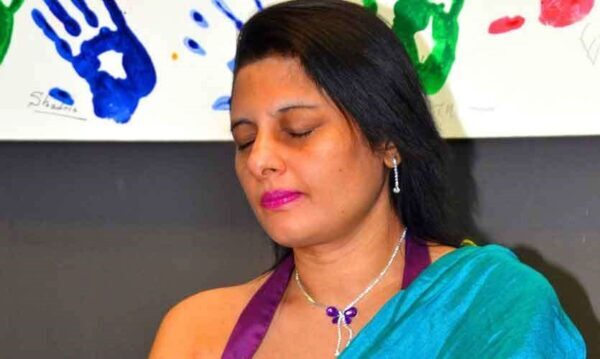 In March 2000 when she was just nineteen years old, when the civil war was at its peak tragedy struck Nayana Ashchariya Peiris Jayakody ,a product of Devi Balika Vidyalaya, a diploma holder in English from the Warwick University, a teller in an international bank when a claymore bomb exploded at Castle street when she was driving home after work. It was reported that 46 were killed many injured from this brutal LTTE attack. Ashchariya had been rushed to the accident service where she had not known what happened when she had gained consciousness after three days in the Intensive Care Unit. Apart from becoming totally blind has had a compound fractured leg having to be confined to a wheelchair for a few years.

She recollects that she has had many friends and mourners in her hospital room that it even had no space to accommodate them. She relates that gradually these sympathizers had gradually diminished eventually she had been made to remain isolated. To add salt to the wound Ashchariya’s parents who were well to do had abandoned her. Hence she has had to navigate through life’s wobbly

roads. It is learnt that Ashchariya’s parents and relatives had discriminated her for choosing the Art’s stream for Advanced Level against their wishes. Hence Ashchariya had to find a way to live on her own by renting out a premises, the main constraint was she had no job and income. With the help of unknown persons, she had traversed through this long period of about twelve years living all by herself. She had confessed that on certain days she has had only a biscuit and a plantain for the whole day and on some days has had nothing. A girl who had sympathized with her on her way to office has given her lunch parcel prepared by her mother to Ashchariya. In this context Ashchariya had to find a way to see her way out of darkness. When she started to cook to see if the gas cooker was working, she used to hold her fingers to the flame. During that period all her fingers were burnt, black in color which was noticed by many who met her.

She has had innate talent for designing clothes. In fact while in school a colleague who also had talent had designed their own clothes as a pastime but never had practiced beyond. At that time, she had not known how competent and powerful in that capability as a fashion designer. She believes after she lost her sight God had given the opportunity to enhance this capacity which she was unaware of to make full use of it. She had developed designing process by making her mind stronger. As any designer she had been able to grasp to visualize differently. She confesses that she cannot copy designs of others as she could not see. She had been inspired by nature and by God. She had recollected everything she

had observed in fashion designing before she lost her sight grabbing into her mind. She from memory imagines colors from earth, sky and from everything God has created. Ashchariya confesses that with eyesight make use of or in fact depend on technology for everything. Now there are equipment for drawing sketches and various other tech-based applications too. But people don’t make use of their brain power when they are dependent on technology. As a result, the brain capacity gets erased. If there’s a power failure people won’t be able to do anything! Therefore, as the saying goes, too much of anything is good for nothing. So, in her case she depended on my brain capacity for everything which she had developed over a decade. Therefore, she does all her calculations, drawings and other exercises by her brain while others do them on their computers. To date Ashchariya has designed all her clothes.

She adds that challenges were immense. None of her relations or friends were there to support her when she needed their support the most. But today after winning the award for the most dedicated “fashion designer” among three hundred contestants all with degrees in fashion designing. With her rise to fame, she has received telephone calls asking if she remembers them to which she wonders what shameless people they were. Hence for her to cope with such people was one of the challenges. She says she was blind, but they weren’t. They would have seen her when walking on the road while being assisted by an unknown three-wheel driver. Where were they then? She didn’t have a house to stay nor did she

have a job and those who supported her were people she never knew. Hence, it was a challenge to stand up on her own from zero. Her figure had been like a skeleton during the period she was at home. To date, she has never received a call from my mother to see whether she dead or alive. It’s the family she had entrusted upon when she had a fall but when they abandoned her which was quite difficult to bear. Ashchariya has challenged herself to love this world back instead of hating it. She has now decided to help people who have fallen in their lives. She says many people have jealous mindsets. They try to have resentments against those who succeed. Ashchariya is now a mother, a good housewife who does all household work on her own, an iron woman indeed,

Ashchariya the only Sri Lankan listed among BBC channel’s 100 Most Inspiring women for 2019.She is now a reputed fashion designer, artist, personality development, corporate and leadership trainer .In year 2017 she was one among the 10 most “Remarkable” women in Sri Lanka which for her is a privilege and a humble honor. We all Sri Lankan’s should be proud of her and wish her well in all her future endeavours.