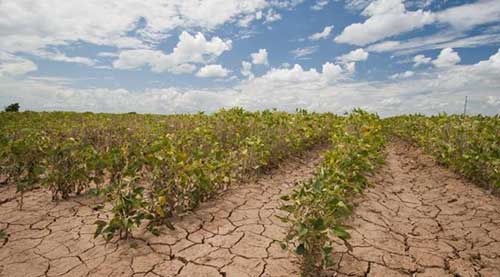 Sri Lanka boasts a legacy of massive ancient irrigation systems built by kings in the dry zone in ancient times. Parakramabhu the Great is believed to have said, “Let not even a drop of rain water go to the sea without benefiting man.” His words may have inspired the professionals in the water sector to develop the irrigated agriculture of the country further, harnessing high rainfall. Total annual renewable surface water resources in Sri Lanka is about 52 billion cubic meters (BCM), while total average annual rainfall is about 112 BCM.

Since the construction of the Senanayake Samudra in the 1950s as the largest reservoir in Sri Lanka, organizations in the water sector have completed many new reservoir projects of large capacities. Lunugamwehera, Weheragala, Deduru Oya, Kalugal Oya and Yan Oya are some of the recent achievements aimed at promoting irrigated agriculture.

The total storage capacity of major and medium irrigation reservoirs in Sri Lanka is about 3.4 BCM. In addition, major reservoirs constructed under the Accelerated Mahaweli Development Project are considered to be multipurpose as the main objective is the generation of hydro-electricity. Nevertheless, the contribution of the Mahaweli reservoirs to irrigated agriculture of the country is indispensable. With the newly constructed Moragahakanda-Kaluganga reservoirs, the total Mahaweli reservoir capacity stands at around 3.2 BCM. In addition, the total number of minor tanks in the country are estimated to be over 10,000, though the total water storage capacity is not accurately known.

Reliability of these reservoirs dependent on rainfall

Irrigated agriculture is the largest user of raw water in Sri Lanka. The country receives almost a constant volume of rainfall annually. But, this does not mean that we have no water issues. Generally, reservoir designs are based on past rainfall characteristics of the areas where they are located. Hence, they depend not only on annually expected rainfall volume but also the temporal pattern of rainfall. They will have the desired storage levels to cater to the demand only if they receive expected rainfall at the right time in the right quantity. In addition, it is important to ensure that the water withdrawal rates remain within the envisaged limits during the reservoir design. When rainfall becomes more variable within season and over time, reliability of reservoirs will decrease.

As explained above if a reservoir does not receive expected rainfall in right quantity in right time it will more or less fail to serve the water demand sites up to the expectation. On the contrary, if it gets rainfall more than expected during a operation cycle the additional amount of water may spill out of the reservoir and find its way to the the sea unless there are any other storage reservoirs downstream to receive it.

The climate change has caused rainfall to behave erratically. Technically speaking what we experience today is a temporal variation accompanied with fluctuation in intensities. Climate change experts predict that Sri Lanka will experience longer dry spells frequently in the future. During such dry spells, often unforeseen, our reservoirs would be incapable of supplying the irrigation water demands continuously throughout the cultivation season.

The global warming or the increase in atmospheric temperature is the root cause of climate change. Hence, the other major impact of climate change is an increase in evapotranspiration. As a consequence, water requirement of the agricultural crops goes up demanding more water from reservoirs. In the meantime, water losses from the reservoirs themselves by way of evaporation will also go up. These scenarios will create more water stresses on irrigated agriculture in future.

When the conditions are not favourable for agriculture there will be a sharp decrease in people engaged in agriculture abandoning their lands. Hence, this crisis should not be understood merely as a water crisis as it has the potential to have ramifications in other social and economic spheres. Therefore, the decrease in agricultural production will lead to higher selling prices, which neither the government nor the consumer is happy about.

Possible interventions to
resolve the issue 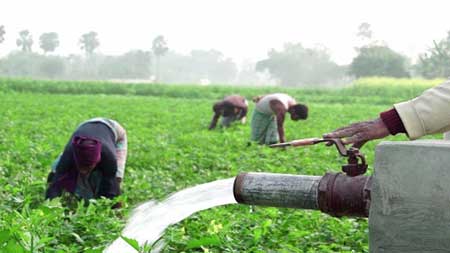 We are not in a position to control a natural phenomenon like rainfall nor to predict the pattern of climate change and its impacts in future accurately. Hence, only option available with us is improving our water management strategies and practices. The construction of storage reservoirs wherever possible will only be a part of the solution. However, we have utilized or identified almost all possible locations for reservoir construction by, now and most of the remaining places have high social and environmental implications.

Under these circumstances some alternatives that may be use to the stakeholders concerned are discussed below. It should be acknowledged that some of these concepts are already in practice but in an ad hoc manner. What is needed is to implement them with clear goals and monitor and assess the outcomes after implementation.

We are not in a position to control a natural phenomenon like rainfall. Besides, we are not able to predict the pattern of climate change and its impacts in the future accurately. Hence, only option available to us is improving our water management strategies and practices.

At present the actual water requirement for producing 1kg of paddy is around 2,500 – 3,500 litres while the crop requirement is about 1,400 litres. This higher requirement is mainly due to the water losses during conveyance and application. Our overall irrigation water use efficiencies are assumed to be just 40 per cent, though no adequate research has been done on this at the field level to calculate it accurately systemwise.

Currently, many countries are working on irrigation modernization (IM) to ensure sustainable irrigated agriculture. The Food and Agriculture Organization (FAO) defines IM as “a process of technical and managerial upgrading (as opposed to mere rehabilitation) of irrigation schemes combined with institutional reforms, with the objective to improve resource utilization (labour, water, economic, environmental) and water delivery service to farms”. Simply speaking, IM consists of a set of interventions to improve water management and level of on-farm services to farmers, which eventually leads to improved crop production and resilience to climate change under the present context. It includes both engineering and management interventions.

These interventions for better water management are mainly as follows:

1. Upgrading of water conveyance systems so that evaporation and infiltration losses can be minimised. Deficient canals are replaced with concrete lined canals and underground pipes

2. Process improvement in water allocation to farmers with modern techniques like supervisory control and data acquisition (SCADA), that intervenes in the process without changing the rules of the water management

3. Pragmatic desilting of reservoirs to regain their original capacities where applicable

4. Improvement of agricultural roads and access roads in farming areas to facilitate easy operations and management

All the irrigation systems are not reservoir-based. There are large number of anicut-based minor irrigation systems. They depend water diverted from rivers or streams. The success of these systems depends on the water availability of rivers and streams.

During rain, a considerable portion of water infiltrates into the ground, and rivers and streams are fed gradually by this groundwater making them perennial. For this mechanism, forests in the river basins play a major role by delaying rain water runoff, which in turn helps ground water recharge. Yet, the issue is diminishing forest cover in our watersheds. This rate of forest cover reduction will adversely affect ground water infiltration and eventually result in dried up rivers and streams. Further, agriculture depending on ground water will face water stresses. Hence, importance of watershed conservation goes without saying.

Farmers’ responsibilities and the role of the extension services

Sri Lankan farmers are supplied with irrigation water free. This does not mean that water does not involve any costs. Even though the relevant authorities could intervene to minimise conveyance water losses of the systems, the control of water application is mainly in farmers’ hands. Therefore, they also have a big role to play in minimising water application losses.

Traditional water application methods should be replaced with best water saving methods. The method known as alternative wetting and drying (AWD), introduced a long time ago, is a water management technique practised in paddy cultivation that need much less water than the usual practice of keeping standing water in the paddy field and proven to give higher yields. In areas where water stress is frequent crops that require less water should be grown with appropriate cultivation methods. If there is an evident shift in rainy season, crop cultivation periods can be adjusted to allow earlier or later planting so that both coincide, in order to reduce irrigation water use.

Where most of the farmers are concerned, dominant factor in the crop selection process seems to be market price and not giving enough attention to crop water requirements. In some cases, it is the farmers’ status quo that matters. Hence, relevant authorities should carefully focus on these issues when they render their extension services to the farmer community. In this respect, better inter-agency cooperation and communication and active participation are essential. No need to mention how the modern technology can be used by the authorities for creating an effective work environment.

The focus of this article has been on looming threats to our irrigated agriculture and discuss few proactive measures briefly and the increasing demand for food due to increasing population has not been factored in. Implementing aforesaid proactive measures need the dedicated action of many players including politicians, public sector organisations and the farmer community. Failure to take prompt action will result in additional stress in food production in the future and that in turn will affect the economy of the country as more and more food items will have to be imported.

(The writer is a chartered Civil Engineer. This article is based on his personal views and does not reflect those of the organisations where he holds positions.)