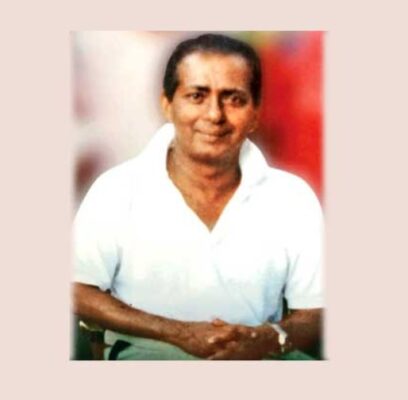 D.H. de Silva, popularly known as DH is a Veteran Cricketer and Tennis coach who was attached to the Kandy Municipality as the Municipal Commissioner, and he started training the young boys and girls in the Kandy City in Tennis at his leisure times.

In addition he was coaching Cricket too as Cricket and Tennis were his favourite sports and mostly it was the Under 12 Children and some of the promising youngsters in his Tennis team were Sangakkara Brothers, Veminda and Kumar and a few others.

They had their initial training from DH at the Tennis Courts of the Garden Club in Kandy. Kumar Sangakkara was interested in Cricket too and at Trinity College, the writer started coaching him at under 13 Level and after that he was coached by Sunil Fernando, Bertie Wijesinha, and Bernard Perera. Sangakkara was coached by D.H. de Silva after which he became a Sri Lanka Test Cricket Captain and a World Class player.

D.H. coached Tennis to the children every Sunday morning and gave them 100 shots each till they were thoroughly into the basics of the game and he arranged some tennis classes to Junior Girls at the same venue. After the coaching of DH Saranga Sangakkara became a National Tennis champion as a student at Mahamaya Girls School,Kandy and the others who were coached by DH were Duleeka Bandaranayake, Tasmin and Vishaka Jayasundera who became National Level players. D.H.de Silva was the Cricket Captain of the Peradeniya University team and he was a National player who represented the Cricket Board Eleven.

He was the Charity Commissioner of the Colombo Municipality and led the Nomads Cricket which emerged Sara Trophy champions.

His eldest son, Mahinda became the National Table Tennis champion when he was a student of St.Anthonys’ College, Katugastota and his daughter, Gayani was also a National level Tennis player who played at many International Tennis Tournaments when she was a student at Mahamaya Girls School, Kandy. His younger son Bindu captained Trinity Rugby team in 1988.

His brother D.S.de Silva captained Sri lanka Test Cricket team while his other Brother D.P.de Silva represented Sri Lanka in Cricket before getting Test Status.against the West Indies. DH passed away in Melbourne, Australia a few years back.