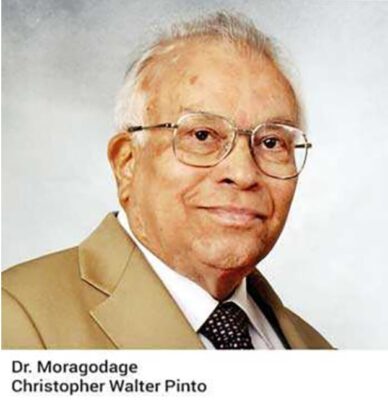 The death occurred in the Hague, Netherlands of Mr Moragoda Christopher Walter Pinto, 91, who made a mark globally in international law.The father of Mr. Milinda Moragoda, former Minister and now High Commissioner for Sri Lanka in New Delhi, Mr. Pinto began his career as Legal Advisor and Head of the Legal Division of the then Ministry of Defence and External Affairs and served as Ambassador to Germany and Austria and as representative f Sri Lanka in various international fora.

He was member of the International Law Commission from 1973 to 1981, following which he took up the position as Secretary-General of the Iran-US Claims Tribunal until 2011.

He contributed to the work of many commissions, including on: Humanitarian Assistance; Principles of Evidence in International Litigation Present problems of the Use of Armed Force in International Law – Sub-groups : Authorization of the Use of Force by the United Nations and Self-defence; The Impact of Information Technology on Rights of Privacy; Humanitarian intervention; Statute and Functions of the Conference of the Parties to a Treaty Piracy, present problems.