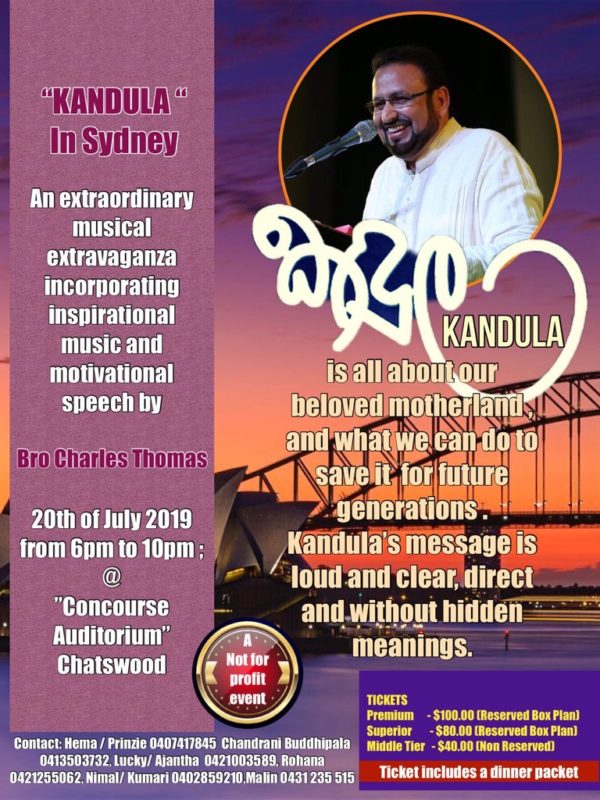 Who is Brother Charles Thomas?

Charles Thomas appeared on Sri Lankan scene, few years ago as a singer and a motivational, inspirational speaker. He did not get much coverage in mainstream media, as he was not aligned to any political party or power group.  He believes he has a mission which need to be fulfilled, using his extraordinary talents.

Bro Charles Thomas’s Kandula addresses issues associated with diverse and conflicting views, and degradation of  social values which leads to many social problems such as street kids and drug peddling etc. which has caused enormous problems in Sri Lanka. At the same time, he points out how, we can change our attitudes and behaviours to address these issues in the society.  The subtle approach he has adopted to horn on these issues through music is amazingly effective.   He carried out his mission using “Youtube”, by creating his own channel called Daham Pahana, utilising a small media centre for Daham Pahana.

People shed tears for various reasons, all in conjunction with inner feelings.

So what better title one could give this program the name “KANDULA” as the presenter of Kandula talks about peoples’ feelings associated with love and hatred.

Kandula program is a combined musical show plus a motivational speech which talks to the hearts of people.

Brother Charles Thomas is the presenter of Kandula program.  Few of us volunteered to sponsor and bring him over to Sydney, this time at a bigger and a better venue.  Recognising his relentless efforts for social change, for over  25 years in Sri Lanka, to change the mindset of people from haterd to compassion.

He is not an ordained Catholic priest.  However, people have endearingly, christened him as “Brother Charles”.  Having not completed his theological studies, he found a better application of his natural talents for the betterment of society. He leads a very simple life in humble dwellings in Sri Lanka. His wants are few, works many hours a day, promoting his cause.

He is a motivational speaker who makes use of his powerful mesmerising singing voice, backed by a full orchestra to enhance the message of having a Sri Lanka devoid of Ethnic, Language or Religious barriers for future generations to live in harmony.

He is basically an agent of change, who motivates people to change their mind set to start thinking outside the square in a more passionate way to address the ills of the society.

His fearless criticism of the, derelict political system of Sri Lanka is admirable. Back in Sri Lanka He works with all three armed forces and the police, going around the country holding “Kandula” programs in schools, Villages, corporate establishments, universities etc., talking to the wider community.  Such meetings are attended by more than 5,000 people in some occasions. He works with Sri Lankans living in 30 countries, disseminating this valuable message. He believes that the people who are capable of rescuing our motherland from its current predicament are living overseas.

People’s opinions about Brother Charles are varied. Such as that he is trying to convert Buddhists to Catholism, with the backing of NGOs etc. We have followed him closely for more than two years but failed to find any convincing evidence to back these claims.

What is clear to us is that, a majority of enlightened people who have followed his programs have gradually changed their outlook from extremist views to moderate views.

His mode of dissemination of his message is through popular music of Sri Lanka.  His ability to talk to the hearts of the people through this medium is really amazing and effective. Brother Charles has a strong, mesmerising voice. He can sing in four languages viz. Sinhala, English, Tamil and Hindi. We Sri Lankans love the 70’s , 80’s the golden era of popular music  in both east and the west. Such songs had beautiful lyrics and deep meaning.

One can always witness, that when he explains the meaning of these songs, that we have never listened to these songs to find the meaning those days, but more for the melody.

He will bring out the human values through the meaning of the lyrics, basically the good and the bad and the ugly behaviour of human beings. He will talk about the fast-declining human values in the society, how greed has overtaken the respect for each other, how money has made people to compete for material values in the eternal “Rat Race”.

His theme is to create a “Spiritually Empowered Nation”. He encourages people to rise up above corruption and nonexistence of law and order in the country and to protect the basic human rights.

He talks about a country, where there should be no street kids begging for alms who then become the agents of underworld, drug pedlars the simple reason being, they are love less kids crying for love. These kids are either orphans or kids of single parents.

His programs are attended by clergy such as Buddhist priests, Catholic/ Christian priests, Hindu priests and Muslim clerics on the same stage.

After the disastrous Easter Sunday bombings in Sri Lanka he broadcasted a very powerful message to all Sri Lankans back home and who live overseas.   His constant reminder is the need to unite and not divide over minor differences, if we aspire to have   a Sri Lanka, which we can be proud to call “Our Motherland”. You can listen to many of his programs on You Tube on “Daham Pahana” as he is not given publicity in the mainstream media channels.

More and more People are rallying round him mainly because of the messages that he disseminates about non-violence and unity, in order to bring about peace in our motherland. He is also working with moderate minded people to bring North and South to work together.

Brother Charles and His musicians will be in SYDNEY.

Brother Charles and his talented orchestra will be in Sydney on the 20th of July 2019, at the Concourse Concert Hall, Chatswood.

You can listen to his inspirational music and motivational speech at one of Sydney’s best venues. Sure, you will wake up and be motivated to do something for the good of humanity and for our beloved motherland.

This event is organised to be a “NOT FOR PROFIT” program. The tickets are your contribution towards the expenses of staging this event, here in Sydney. The ticket price includes a dinner pack as well.

We want you to enjoy the brilliant music and captivating speech of Brother Charles Thomas. Come and join us to enjoy this memorable musical evening.

Hema and Prinzie Perera on behalf of Kandula team, Sydney