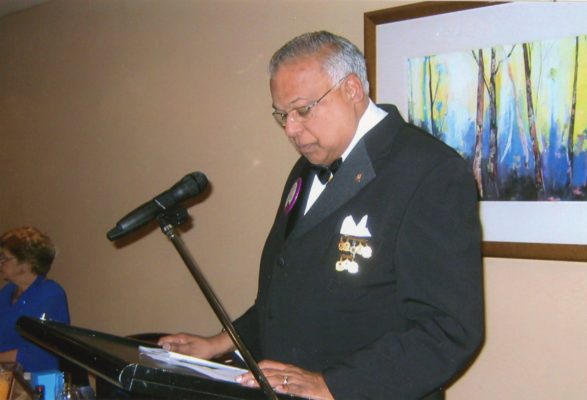 Harry de Sayrah a proud product of St. Josephs College, Colombo 10 and now a resident of Australia counts 50 years of service to the community this year. A life member of the 101 year old Lions Club International, the largest service organization in the world, Harry has served the communities of Sri Lanka for 20 years and Australia for 30 years.

Harry de Sayrah OAM JP was awarded the Order of Australia in the Queen’s Birthday honours in the year 2007. He is also a Melvin Jones Fellow, a rare honour bestowed on Lions Club members for distinguished service to charity.
Harry de Sayrah in an article to the ‘Ceylankan’ (The Journal of the Ceylon Society of Australia) speaks of the glory days of Horse Racing in Ceylon and recalls with joy that in achieving his youthful dreams of owning racehorses and leading them in to the winners circle that fairytales do come true!
(Grateful thanks to The Ceylankan, Mr.Hugh Karunanayake and Mr.Harry de Sayrah for this story.)

This is Harry’s Story…

From the “Gandhi Side” to the Queens Box!
It is said that Horse Racing is the Sport of Kings but I was no King when I got interested in this sport. I went to the races at the Havelock Race Course in my youth and stood in the baking hot sun in the Rs.1.00 enclosure called the “Gandhi Side” in the middle of the racecourse. My parents who were keen turfites and silent punters, sat in the Member’s Enclosure in the Grand Stand whenever they attended.

It was greatly exciting to me to see the famous Cotton Hall, Kunj Lata, Cosy Corner go past the winning post and watch the owners of the winning horses lead them into the paddocks and face a battery of photographers and receive Sterling Silver Trophies like the Governor General’s Cup for Thoroughbreds and the Roberts Cup for the Arab Horses. I often use to dream when I would get an opportunity to achieve this feat?

That opportunity came one day in the late 1950’s when my mother Charlotte purchased on easy payment terms, a grey mare called ‘Persian Approach’ from Sir Donatus Victoria for Rs.5000.00 and registered the mare in my name. My racing colours were Orange Black Cross Sashes, front and back, and Black cap.

The mare was trained by Eustace Samarawira and won five races. She favoured the left hand track at Nuwara Eliya where races were held during the April season. ‘Persian Approach’ found the heat in Colombo distressing and whenever she raced in Colombo, she was taken back immediately after the races to be brought back on a Thursday for the following Saturday’s races.
We had a misunderstanding with Samarawira and moved stables to veteran trainer A. Selvaratnam – a trainer who won many famous races for his clients. One day, Selvaratnam came home with his stable jockey and son – in – law Ted Fordyce and persuaded us to purchase a two year old filly, ‘Golden Optic’, imported by the Ceylon Turf Club (CTC) for Rs.8000.00 on easy – payment terms. The filly was renamed “Miss Anoma” after my lucky sister. “Miss Anoma” won 16 races, including four Sterling Silver Trophies. Our string of racehorses increased with the purchase of a third horse “Master Rukman” , named after the first De Sayrah grandson. “Master Rukman” won only one race – the S. G. Morley Cup which was presented to me by the Prime Minister Dudley Senanayake.

Now my dream had finally come true and I got numerous opportunities to lead my winning horses in to the paddocks and go up to the Queen’s Box and receive trophies from various political and racing dignitaries at the time.
“Miss Anoma” won for me the W. B. Bartlett Cup and I received the trophy from the Governor General Sir Oliver Goonetilleke. This mare also won the Channer Cup and I received the trophy from Francis Amarasuriya, President of the Board of Stewards of the Ceylon Turf Cub. The fourth trophy, the Closenberg Cup, I received from Sir Razik Fareed, President of the Board of Stewards a year later.

The origin of the Channer Cup is worth noting. In the early days of horse racing in Colombo, the five furlong (approx. 1000m) staright course starting from the Queen’s Club end of the course and leding up to the ‘winning post’ was known as the “Channers Straight”. This straight course was scrapped in the late 1950’s and a trophy named the “Channers Cup” was introduced.
There were many foreign jockeys who rode for me. To name a few: there was Ted Fordyce, Bill Stevens, F. L. Smith and Ted Doone – all Australian jockeys. Ted Doone now 92 years resides in elders home. Fordyce and Smith rode in Ceylon (Sri Lanka) for many years and married Sri Lankans. Among the local jockeys were F. J. Isaacs, P. D. P. Perera, J. T. Samarawira (nephew of trainer Eustace), W. Somapala and Don Benjamin. Isaacs, a light weight jockey won many races for my stables.

There were many well known race horse owners, namely, Vernon Rajapakse, Thaha Cassim, Sir Razik Fareed, The Amarasuriya Brothers (Francis and Buddy), Chevalier Sir Chittampalam Gardiner, Sir Donatus Victoria and Sir Oliver Goonetilleke, who raced his horses in the name of his daughter Shiela Dodanwela.
And thus unfolded my transition from a mere spectator in the “Gandhi Side” to a winning owner in the Queen’s Box!

Authors Note: I was privileged to have presented two of the Sterling Silver Trophies to my old school St. Joseph’s College – which are now offered as Challenge Cups to the school’s Senior and Junior Sportsmen of the Year 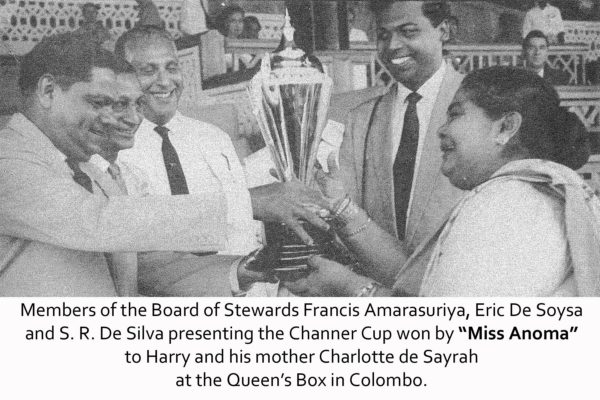 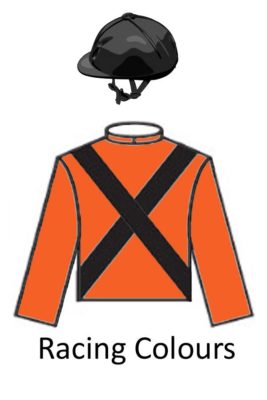