Into the valley of death marched the 600 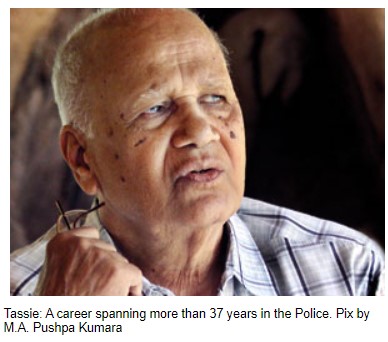 In one man’s quest for justice, retired Senior Superintendent of Police Tassie Seneviratne recounts the “saddest day in Sri Lanka’s police history” in his soon to be released book
‘Human Rights & Policing – Reminiscences of My Police Days’.
Kumudini Hettiarachchi reports
He lives in retirement in Gampaha, reading, writing, gardening and listening to bird calls but although he has had a colourful career in the Police Force of old during its “best of times” which gradually became the “worst of times” there is a quest burning within him. A compelling duty yet to be fulfilled.

Justice and due recognition for a group of “forgotten heroes”, is retired Senior Superintendent of Police Tassie Seneviratne’s quest. A quest begun way back in June 1990 when he traced the bloody and tragic path that several of his brother officers and juniors were “ordered” to take……lambs to the slaughter.

“……..blindfolded – their hands tied to their backs – made to lie down facing the ground in a row about 25 metres long – sprayed machine gun bullets in the back of their heads – their bodies dragged by their feet into a heap – oil poured over their bodies and burnt.”

This is the gruesome tale he heard from a Tamil farmer at Thambiluvil who had been one among others ordered to bury the charred bodies thereafter. Mr. Seneviratne has painstakingly tried to trace the last moments of the doomed policemen whose fate was sealed when the order of “No confrontation” followed by “Surrender” came from the highest in the land, none other than the then Executive President Ranasinghe Premadasa, through the then Inspector General of Police Ernest Perera. This was at a time when Minister A.C.S. Hameed was the mediator between the government and the LTTE, trying to bring the stubborn guerrillas to the negotiating table.

D-Day for over 300 men, both rank and file, from the Kalmunai, Akkaraipattu, Samanthurai and Pothuvil Police Stations was June 11, 1990 and even so many years later, Mr. Seneviratne is overcome by emotion. As this 76-year-old recounts the “saddest day in police history”, for a fleeting moment his face crumples up. (The final toll with those killed elsewhere was over 600.)

The veteran cop’s “passion”, now is in black and white, and puts the “saddest day in police history” under the magnifying glass in his memoirs to be launched this week.

“Ivan Boteju (Assistant Superintendent of Police, Kalmunai), an athletic great of the fifties, smart and always spick and span, walked from the Police Station with his men – this time his head hanging low, unbuttoned shirt hanging out, sobbing and obeying. By way of deception the LTTE Tigers took 324 Policemen to the Tirukkovil jungles instead of Amparai, blindfolded them, tied their hands to their backs, got them to lie down facing the ground and massacred them in a most cowardly manner, spraying bullets into them,” Mr. Seneviratne states in his book. 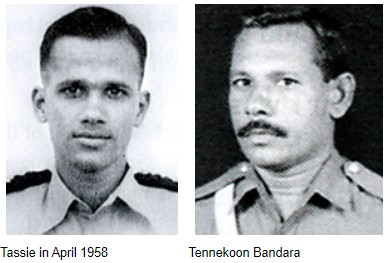 Shortly after this historic incident, Mr. Seneviratne who was then Director looking into police grievances, went to these Police Stations – Kalmunai, Akkaraipattu, Samanthurai and Pothuvil where the personnel had been ordered to surrender, in search of what really happened.There was a lack of information. Inundated by requests for authentic information he went to make on-the-spot inquiries, accompanied by Constable R.M. Tennekoon Bandara who had escaped the ruthless terrorists by submerging himself in a lagoon infested with large buffalo-leeches and covered with water hyacinth.They then met another “good find” Sergeant Abdul Lathif Najimuddeen, who with serious head injuries, had escaped being shot dead by the terrorists by pretending to be dead when the policemen were gunned down in the jungle in Tirukkovil. It had been that farmer who had given him refuge and later helped him to escape.A bundle of meticulous notes Mr. Seneviratne made on his many trips were collated into a detailed report later and he was “thrilled” when he and his team were able to find 11 of those believed to be killed by the Tigers, injured but in hiding at Lahugala.What rankles with Mr. Seneviratne most is the “surrender order” even against the insistent protests of Ivan Boteju that they “would be tortured, if not killed”.The order to surrender was unlawful when death was imminent, explains Mr. Seneviratne and only “lawful orders” should be followed. But for political expediency the “lawful” part is dropped.Ivan Boteju and his men had got the better of the terrorists. There were more casualties on the side of the terrorists when he was asked to surrender, even though the Tigers had more sophisticated weaponry “gifted to them by President Premadasa”, he says.The veteran with a police career of 37 years blames political expediency squarely for the many setbacks during the three-decade insurgency. “It was not only the Premadasa government but even later, the Chandrika Kumaratunga government soft-pedalled the issue because they were playing ball with the terrorists,” he suggests.”In April 1989, the LTTE accepted the President’s (Premadasa’s) call and peace talks commenced between the Government and the LTTE………Groups of Liberation Tigers, however, committed acts of provocation against the Security Forces. These provocations, though humiliating, had to be tolerated by the Security Forces……….’No confrontation at any cost,’ remained the command……..Thus the LTTE built up their army……Bunkers were built even within firing range of security establishments – the excuse being, to defend themselves if attacked! On the 11th June 1990 while peace talks were still in progress in Colombo, and the STF was providing security to the LTTE housed in five star hotels, Police Stations in the East were surrounded by armed cadres of the LTTE who ordered the policemen under threat of death to surrender their arms and vacate the Police Stations. The duteous Policemen found themselves on the horns of a dilemma.”Mr. Seneviratne quotes the Superintendent of Police Amparai M.F. Noordeen who says: “……….All efforts to obtain air support and artillery support failed up to 1720 hrs. At this time IG (Inspector General of Police) spoke to me from Batticaloa and ordered to stop firing, and officers of Kalmunai to surrender to the LTTE like at Kalawanchikudi……..By 1800 hrs Police surrendered without any assistance from anybody and thereafter lost communications……”Knowing the ground situation, Colombo should never have been asked for orders. Reinforcements should have been sent or the policemen asked to evacuate, stresses Mr. Seneviratne.While pointing an accusing finger not only at human rights groups but also international non-governmental organizations for their deafening silence in the face of such unforgivable atrocities on the part of the LTTE, he writes with appreciation of the old Tamil farmer who had seen the carnage and strongly disapproved of what the Tigers had done. “I met this good man and he related to me the ghastly story. He concluded the story swearing that god Muruga (god Kataragama) is greatly disturbed and will avenge the inhuman massacre of those forlorn human beings.”Still simmering that there was no formal inquiry into the massacre, Mr. Seneviratne says a statement was made by the government of the day in Parliament glossing over the incident. The Criminal Investigations Department did hold an inquiry but did not investigate the surrender order.Now mulling over the fate of those policemen and the injustice and extent to which political expediency can destroy lives, he believes then IGP Ernest Perera was a broken man and it was weighing heavily on his conscience.For many, both within the police and the government, the massacre of these policemen may seem a closed chapter but not for Tassie Seneviratne. His quest for justice has not been stilled and in January he had taken the cause up before the Lessons Learnt and Reconciliation Commission (LLRC) set up by the government to look into events which took place in the last eight years of the conflict.For this retired SSP, the words of the Assistant Director of Training, Fred Brohier who interviewed the class (Mr. Seneviratne included) which had young men who were aspiring to join the Police Force so long ago still echoes and re-echoes: “To whom is a police officer’s loyalty due? To no mother’s son, but to the law of the land.”This is what Mr. Seneviratne is attempting to achieve even in his retirement after an illustrious career with the khaki-uniformed gentry of yore, to ensure justice and fairplay which are the foundations on which the law of the land survives and thrives.

And Tassie Seneviratne will continue his search for justice for those unfortunate policemen and only be vindicated if the powers that be officially acknowledge that those men died because they followed orders – orders to surrender. So many other policemen get double promotions in the field for some “act of bravery that no one knows of, sometimes even for eliminating a politician’s rival”, why not Ivan Boteju, he asks. If Boteju had found the time to leave the operational area he was serving at the time of his death to sit the Tamil competency test, he would have been an SP thereafter. He should rightfully be promoted Deputy Inspector General posthumously.The families of those policemen should also be adequately compensated, says Mr. Seneviratne, explaining that then even late in the day as it is already 21 years later, they will know that their loved ones didn’t die in vain.As we leave the home of the Seneviratnes after enjoying a spread which included lavaria, aluwa and hot cups of tea last Tuesday, the famous lines from Sir Walter Scott come to mind: A child will weep a bramble’s smart; A maid to see her sparrow part; A stripling for a woman’s heart; But woe awaits country when She sees the tears of bearded men.He may not be bearded, but the voice of this elder policeman should at least be heard now that the Tigers have been vanquished and Sri Lanka is at peace — a peace for which many people laid down their lives.Book launchHuman Rights & Policing – Reminiscences of My Police Days’ by Tassie Seneviratne, Senior Superintendent of Police (Rtd) will be launched at 4.30 p.m. on Thursday, May 5 at the auditorium of the Organization of Professional Associations (OPA), Prof. Stanley Wijesundera Mawatha, Colombo 7.
The book, priced at Rs. 750 and printed by Nefesh (Pvt) Ltd., will be available at all leading bookshops