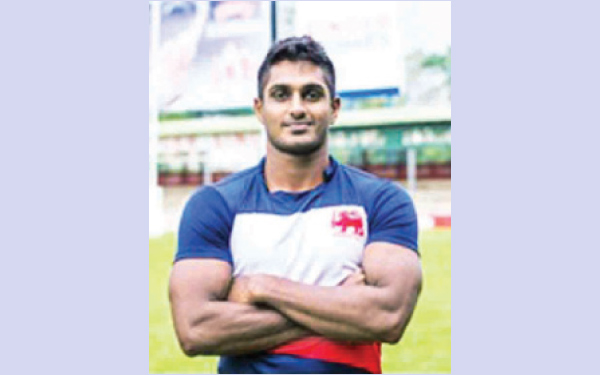 Vidyartha College’s Jason Dissanayake who is a six footer is arguably one of the finest rugby players to come out of this school in recent times, and certainly one of the most durable. Jason Dissanayke made his rugby debut for Vidyartha College in 2010, and led the side in 2012 and gave his best for the game and that year he took part in the youth Commonwealth Games Rugby 7s in Isle of Man.Later he played for Navy, CR and FC, and Kandy SC and for the national side.

He started his club rugby for the Navy, getting into top gear, later crossing over to CR and FC from there to Kandy Sports Club he was an outstanding sevens and fifteens player during his school days and later for clubs. In 2020 Jason Dissanayake had a hat-trick of tries which helped reigning Dialog Rugby League champions KandySC continue their unbeaten run, with a comfortable 36-26 win against Army SC atWelisara. With Dissanayake’s three tries, Kandy completed yet another game with bonus points after scoring from a tally of six tries and three conversions, while leading 26-12 at half time. Army, who had been quite impressive that season, was bolstered by the presence of FijianTomasi Ravouvou, who scored two tries single handedly in the second half.

Army in the end finished with a tally of four tries and three conversions, while also earning bonus points Jason has represented the Sri Lanka side in 7s and 15s since 2012.

He has also taken part in the West London Rugby Sevens in 2019. He has been playing for Kandy Rugby Team since 2017. He is a solid forward who is good in ball handling and tackling . He has a knack for finding the try line in matches which is demonstrated by his individual score against the teams he played.

He is a player who is different from the rest. While many have talent and form an important part of their team’s machine, only very few make the real difference when it matters most.