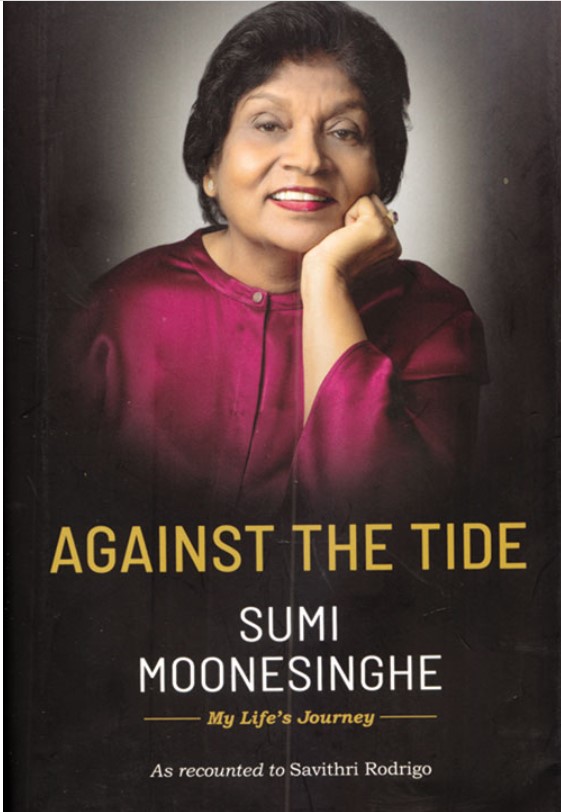 It was possibly a little after midnight, at the Supper Club. Circa 1991. It was the year Rajiv Gandhi was killed, the Hubble telescope was launched, and I met Sumi.

Sumi was there with Susil and mutual friends Badra and Kokila Wimalasekera. One of them introduced me to Sumi. By the end of the evening, between the dancing and the drinks, she hired me as her Marketing Director for Jones Overseas. That typifies Sumi. When needed, she can be like quicksilver, decisive and fast to assess a situation. She never walks away from closing a deal, whatever the context.

Her capacity to make strong and gut decisions are rarely capricious. Her mind has a clarity of purpose. She knows what she wants and she goes for it.

It was a fascinating juncture in her leadership and relationship with the New Zealand Milk Board. Anchor in Sri Lanka was already running in pole position – 70% market share with an 18 % price premium, the only country in the group at that time where Anchor had ousted the world’s biggest food company. Nestle. Nestle, on the other hand, was throwing everything and the kitchen sink at her to oust Anchor. Nestle had entered Sri Lanka in 1906 and was a 100-year-old heritage brand.

Nestle added 26 vitamins into its local Nespray, hired high-powered lobbyists, developed salacious campaigns about contaminated milk, and ran mega ad budgets on a ridiculous value proposition that “Local cows have better grass fodder than New Zealand!” It was, in fact, a classic panic reaction of how not to fight a market leader.

Sumi was unfazed. She had a knack of finding the right people for the right job – this was her ‘A team’. She trusted them, empowered them and resourced them.

Mehra Abeygunawardene’s meticulously executed sales strategy became the playbook for the Middle East and Asia. JoJo Kanjirath had made Anchor the country’s biggest milk brand and Sumi had a brilliant stroke of intuition in backing Rosy Senanayake (who became Mrs. World). She positioned her as the face and mother figure, retaining her across time which showed her ability to stay the course, despite her legendary impatience. She knew if something was working well, not to change it. It’s a fine line, but business acumen is founded on timing and Sumi knew when to move and when to hold on and milk an opportunity. Pun intended!

Unconsciously, they had stumbled upon the fact that the masses believed that Rosy’s fairness came from drinking Anchor, and though at no point did the messaging ever state this, the subliminal correlation stuck. Coupled with a constant messaging of quality premium value and that ‘mother knows best,’ Anchor was the poster brand for brand building.

Sumi then took one of those courageous calls so rare amongst business leaders. To do the morally right thing and not fret the business impact, she partnered UNICEF on a public awareness series conceptualised by Shaan Corea, commissioning the country’s first public service awareness campaign on the importance of breastfeeding and neonatal tips for mums. It was another stroke (unintended perhaps but spot on) of marketing brilliance.

It was a double whammy. Rupavahini gave her free prime time exposure that far exceeded her production costs, achieving huge brand saliency. The consumer trusted the brand because it told them the right thing – breastfeed as long as you can. And they remembered with gratitude the multitude of tips they got in their early postnatal days and migrated in the six months or first year when mother’s milk was no longer available.

It was around this time that I entered the business. Anchor was already a well-established market leader and she took another risk, by deciding to grow the market in a generic ‘Drink more milk’ campaign. Marketing textbooks would advise against generic market development campaigns by premium segment players with a dominant market share (Anchor’s 70% as price leader was itself a market anomaly).

Theory said this strategy would grow competitor share at the bottom end. Never one to fear the path less travelled, she threw the rule book out and backed a campaign that grew the market for the lower masses. The highly-creative cartoon-style milk campaign ended up sweeping the SLIM Campaign of the Year Award and the Effies.

Anchor’s brand building success will certainly go down in the annals of local marketing case lore, and in Fonterra’s case its global strategy, as a benchmark. I recall Unilever Brands Director Amal Cabraal asking me to send him a case study on Anchor that he could highlight at a Unilever global conference. We were a small country but we were the pole star. Sumi was treated like royalty by the main Board of Directors of New Zealand Milk Products (NZMP), all of whom were her friends by now. There was deep and abiding respect and trust.

In the meanwhile, The Maharaja Group, which owned the franchise, acquired the Pepsi franchise. Jones Overseas, under Sumi, oversaw and funded the Pepsi sales force until it got on its feet. Various other distractions were tossed in – a cough syrup and a cookie business from Australia to boot. She succesfully brokered a joint venture with New Zealand Milk, and Jones Overseas which was renamed New Zealand Milk Products Pvt. Ltd (NZMP).

Around this time, Sumi raised her game. She decided to grow the lower end of the market with the introduction of Ratthi, a risky move that stretched the trust of the New Zealanders. It is a testament to the faith they had in her that they let her get away with it.

To differentiate and consolidate the new brand and ensure there was no cannibalization from Anchor, Sumi needed a rear guard attack on Lakspray. She brought in a UK-manufactured milk powder which had 26% milk fat (less cream, less quality) to attack the number two value leader Lakspray. Lakspray was a leader in the tea and coffee segment at a different price point.

She had initially decided to push it unbranded to tea and coffee shops in plain foil packs. It failed to gain traction. This was the juncture at which I entered the business. I asked her if she had the guts to go the whole hog and really build a new market segment rather than try a covert unbranded attack. She didn’t flinch or waver, but flagged me on. Thus, Ratthi was born. Today, it has totally ousted Lakspray, dominating this segment.

In the interim, she decided to extend the Anchor brand architecture into related dairy categories. She began drawing plans to introduce yoghurt and butter lines and constructed a factory, doing it in record time. This once again, became a blueprint for NZMP and Fonterra, the umbrella corporate brand name that New Zealand Dairy Board used in other parts of Asia. She eventually facilitated a complete acquisition of NZMP by Fonterra in 1996, making it a full multinational, and the Maharaja Group exited the business.

The philanthropist and friend

I had been with her under two years when I needed to leave Sri Lanka and support my husband who was taking up a posting in Kuala Lumpur. Sumi was sad to see me go at such a critical juncture. But she was ever so supportive, offering to open many doors with her legion of contacts in the region.

This again was one of Sumi’s most defining features. Her largeness of heart and spirit. I saw her offer an entire sugar trading business, which was immensely lucrative, to one of her Anchor team salespersons. Her cup was overflowing; she had made enough. So she gave that business away, lock, stock and barrel for love and friendship – with nothing expected in return.

Most recently, I was with her one day when a call came through; Teddy, one of her old team members, had had a heart attack and needed urgent surgery. She called his daughter and said, “I’m transferring a million rupees, get the surgery done.” She saved his life.

Decades on, she crossed over from Singapore especially to meet me in Kuala Lumpur. She heard I had hit one of those rough patches. My husband was tail-ending a long battle with Alzheimer’s, my youngest was doing her A/Levels going to one of the most expensive British schools in Kuala Lumpur, my son was at university in London, and although I had a plum job as Country Head of Interbrand, the world’s premier brand consultancy.

I was faced with a moral dilemma. There was some distrust that had developed between the local equity partner, the Chinese entrepreneur and Group Chairman who had brought me into Malaysia and his Regional Director and JV partner. It was a typical multinational strategy of playing around with transfer pricing, keeping most of the business within the Singapore and Japanese regional offices. I had decided to leave rather than be disloyal to my former boss. However, my daughter’s education was being paid for by the company and pulling her out of school could jeopardise her A/Levels.

I had bounced my concerns off Sumi; as a former boss she knew that loyalty scored high in my playbook. In her characteristically generous and impulsive style, she came over from Singapore and told me, “Never fear the future. Don’t worry, this will pass. You will fly high again. I admire what you are doing for your husband and holding the family together.” She left me an envelope, making me promise not to open it until she left.

In it, was a note which said: “Consider this a belated thank you for helping me on my journey towards success. With love and gratitude,” and a cheque covering an entire year of my daughter’s schooling! What was amazing was not that she offered to pay the fees, but her sensitivity to my pride and ego, framing it as a reward for work done. In fact as I tried to return it, she blithely said, “Think of it as a delayed bonus!”

(To be continued next week)