The food prepared by frying or grilling are not quite healthy than the food cooked by the method of boiling. Research has revealed that exposure to cooking oil used to fry chips can increase the risk of health more than cooking things by boiling such as cooking rice and curries. Scientists say potentially harmful particles are released into the air when oil is heated to the temperatures needed to cook chips or stir-fries. Unlike in the past now Sri Lankans also got used to eating fried food on regular basis. Present day the places like Battramulla have completely transformed to fit into a modern city with lots of modern buildings such as large supermarkets, restaurants, takeaways and many other types of places. The people are so busy so the only way out is to have takeaway food. 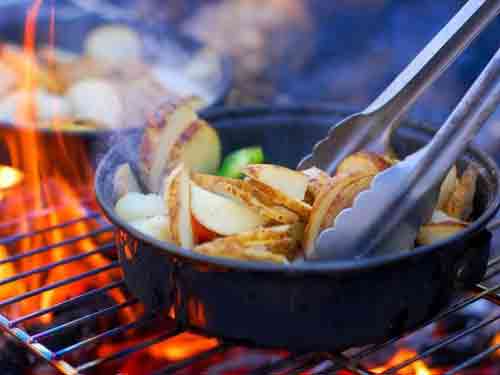 At restaurants and takeaways there are people employed to fry things such as chips, fish and chicken and then stir frying. In the processes of stir frying and cooking chips give out some aromatic chemicals and these chemicals can increase the chance of diseases such as to lungs, breasts and bladder. It must be noted that an occasional small scale frying or stir frying might not be dangerous such as professional cooking. At home the people fry some dry fish such as sprats and papadams for their lunch and dinners, I am sure this kind of small scale frying would not do much harm.

Scientists have discovered that heating up vegetable oils leads to the release of high concentrations of chemicals called aldehydes, which have been linked to illnesses including cancer, heart disease and dementia.

Until recently, many experts recommended that we should avoid olive oil when cooking and instead choose either vegetable or sunflower oil.

Researchers say all cooking oils produce the particles but vegetable oil is the most dangerous. Corn oil and olive oil also pose a risk, deep-frying chips, in particular, produces large amounts of the complicated chemicals such as polycyclic aromatic hydrocarbons. An aromatic molecule has a six sided ring and a polycyclic aromatic hydrocarbon has a few of them joined together.

High temperature is not safe

It also produces the compound acrylamide, another unhealthy chemical. Acrylamide is a chemical produced naturally in food as a result of cooking starch rich food at high temperatures, such as when baking or frying.
Burnt toast also contains small amounts of polycyclic aromatic hydrocarbons (PAHs), better known as a class of air pollutant. “Some of those chemicals are proven carcinogens says Brent. His advice is to toast bread to the lowest acceptable level. And if you want to be really cautious, cut off the crusts as these usually contain more acrylamide from when the bread was baked.

Acrylamide tends to form when foods that are high in carbohydrates and/or an amino acid called asparagine are cooked at high temperatures. Cooking methods that tend to require high temperatures – like frying, roasting, and baking – are more likely to cause acrylamide formation in food. Non-cooked and boiled foods almost never contain detectable levels of acrylamide.

Acrylamide forms from sugars and an amino acid (asparagine — a building block of protein) found naturally in foods that are fried, roasted or baked. This chemical is more likely to increase the longer foods are cooked with these methods, and the higher the temperature. Boiling or steaming of the same foods do not typically result in acrylamide formation so cooking by boiling is safe.

Acrylamide was discovered accidentally in foods in April 2002 by scientists in Sweden when they found the chemical in starchy foods, such as potato chips (potato crisps), French fries, and bread that had been heated higher than 120 °C (248 °F) (production of acrylamide in the heating process was shown to be temperature-dependent). It was not found in food that had been boiled or in foods that were not heated.

Cooking is a kind of chemical reaction

Cooking brings about chemical changes in food. The texture and taste changes when food is cooked. Baking powder contains sodium hydrogen carbonate. This breaks down when heated, releasing carbon dioxide that helps cake mixtures to rise during baking. I always thought cooking is a synthetic organic chemical reaction because organic chemicals in food are reacted either in cooking or frying. In the synthesis of organic chemicals we add a few chemicals and react in a liquid media [not water] such as an alcohol for about an hour. My area of studies was synthetic organic chemistry. The resulting product is analysed to prove the chemical structure or the nature of the chemical because unlike in cooking they cannot be tasted to see if it’s cooked. Those dangerous chemicals are also likely to be produced by grilling and roasting food. Research indicates that acrylamide does not occur in foods processed by boiling or microwaving. It has been found in a wide range of home cooked and processed foods including potato crisps, chips, bread and crisp breads and even in coffee.

The study, published by the Royal Society of Chemistry, estimates that someone regularly exposed to high levels of these chemicals would have a one in 100 chance of developing respiratory and other related problems.

The researchers advised cooks to make sure kitchens are properly ventilated and to try to boil and steam foods instead of frying. In places like England the people hardly care to open the doors and windows to let some fresh air while cooking because of the cold weather. Back home in Sri Lanka they are always widely open so no problem of ventilation. No mechanical ventilation is required, just natural ventilation get rid of the cooking smell and burnt out gases and required oxygen comes in air.

They said: “It is highly possible for cooks to be exposed to harmful particles even while cooking at home. “It is advantageous to carry out cooking activities in well-ventilated kitchens, either mechanically or naturally ventilated. Exposure could be minimised by installing an effective fume-extractor over a gas stove. In places like Sri Lanka kitchen windows and the doors are always kept wide open due natural hot weather conditions so no problems of natural ventilation. Mechanical ventilation or extractor fan ventilation is required in cold weather countries such as in California and England.

Have you ever thought about what happens when you cook food at High Temperatures?

Quite often protein becomes coagulated, making it less digestible (studies suggest that cooked proteins are up to 50% less likely to be utilized by the body.)

Overly cooked foods ferment more easily, causing them to putrefy in the intestinal tract creating candida and body odour as it eliminates.

Cooked food is acid-forming; most raw food is alkaline-forming. Now you see why people eat fruits such as bananas, apples and grapes after a meal or at least some fruit salads. I really like a fruit salad with tropical fruits like papaws, pineapples, bananas like “koli kuttu”, ripe mangos and fashion fruits. Then a few drops of vanilla essence and ice cream makes more palatable. Your comments are welcomed perera6@hotmail.co.uk