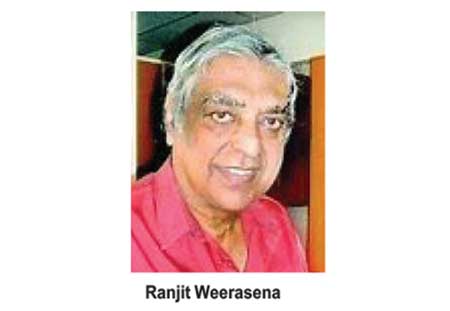 Former national discus throw champion and top sports administrator Ranjit Weerasena (79) passed away after a long illness on Tuesday. Weerasena reigned the throwing arena for more than a decade from late 60s after emerging as a formidable Public Schools athlete from St. Peter’s College, Bambalapitiya. He was the Public Schools Champion in 1959.

He took under his belt the national discus throw record (39.94 metres) in 1963 and it remained unbroken until H.G. Gunadasa improved on it in 1973.

Weerasena excelled during an era when Sri Lanka was starting to make a mark in the Asian region in athletics. At international level he had Indo-Ceylon and Singapore Open victories as his highest achievements.

He was 37 when he was first elected as the president of Sri Lanka Athletics. He also served in the Council of the Asian Athletics Association. According to Olympian Sunil Gunawardena Weerasena was one of the few administrators to have spent from their own pockets for athletics.

He had to step down from the post of president when Sri Lanka failed to win medals at the Asian Games and in 1996 was selected to the same post uncontested.

Weerasena also held the president post of the Sri Lanka Veterans Athletics Association and was one time head of the National Selection Committee.

His contribution for sports was recognized at the Presidential Sports Awards three years ago when he was awarded the Life Time Achievement Award of Excellence.

He leaves behind his wife Asoka who was a national level netball player.