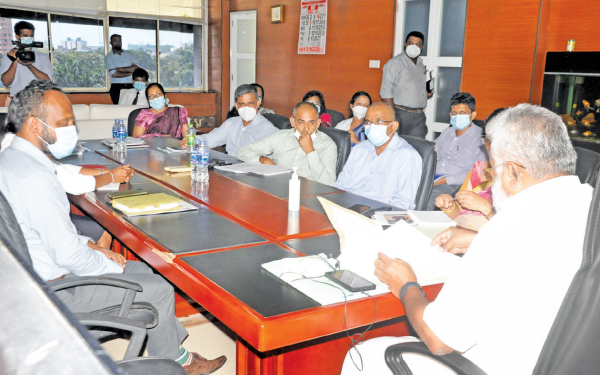 Minister Douglas Devananda at a meeting with NARA scientists.
Source:Dailynews

Minister that they were compelled to stop ongoing research projects due to the acute fuel shortage and lack of resource facilities.

They said that under these circumstances they were unable to furnish the research data to be used for upgrading and improving the country’s fisheries industry including value addition, enhancement of fish catch, the modernization of fishing vessels and fishing gear, expanding export of fish and other sea food, and as such requested the Minister to take immediate action to revive the projects.

Speaking to the scientists, Minister Devananda said that in addition to the fuel crisis, the public are refraining from fish consumption due to the high prices of fish and sea food, which may cause malnutrition. He insisted that the experts make every effort and endeavour for finding ways and means for the enhancement of production using less fuel and other alternative methodologies. He admitted that the proposed fisheries industry development projects were not implementable sans an advanced and updated research database.

The NARA scientists requested the Minister to start research centres pertaining to the fisheries industry and aquatic culture development in the Northern and Eastern Provinces. They submitted that in addition to the present fuel crisis, the shortcomings being experienced in the implementation of research for the expansion of the fisheries industry will be overcome by using local resourcesd.

Minister Devananda responding to the proposals and requests submitted by the NARA scientists emphasized that amidst challenges the institute will work with utmost dedication for introducing and promoting advanced fishery and aquatic resources development projects for achieving two objectives – earning foreign exchange and ensuring sustainable livelihood empowerment of the fisheries community.