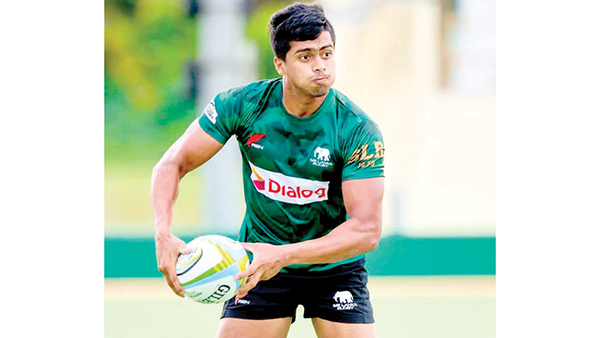 Twenty four year old Reeza Raffaideen is one of the finest rugby players produced by Kingswood College,Kandy. So far he has done extremely well representing the country in many rugby sevens tournaments here and abroad. Reeza started playing rugby when he was in Grade Seven Class and at that time he was a student of an International School in Kandy and then got admitted to Kingswood College, Kandy in 2010 and he joined the Rugby Academy of the college and played at junior level and then was selected to the senior team of Kingswood College and played for the 1st XV rugby team for four years as full back.

His contemporaries were Saris Ally, Hirantha Manamendra and Naradha Wellangiriya to name a few and his rugby coach was Ananda Kasthuriarachchi. He was in the first XV rugby team of Kingswood for four years and was the captain of the team in the final year and the team was placed fifth at the Schools Rugby League and Reeza scored the highest number of points(115 points)

After leaving school in the year 2015 Reeza got his first tour at the Under20 Asian Rugby Sevens Championship which was held in Malaysia and Hong Kong and the team became the Cup runners-up in the Asian series. After that he was called up for the National Rugby team the same year and he toured for the Singapore Sevens Championship with the National Team in 2015 and in the same year he represented the country at the Junior Asian XV and played as a winger.

He was also a member of the Sri Lanka Sevens Rugby team at the Singapore Sevens in 2019. In the same year he played for the Sri Lnka Rugby Sevens team at the Rugby Sevens held in China. Some of his team mates were Danush Dayan, Srinath Sooriyabandara and Danushka Ranjan to name a few.Reeza was selected as the Most Valuable Rugby Player at the 49th Mercantile Rugby Sevens Tournament representing the Toshiba Team in the Cup championship in the John Keels Inter-company Rugby Championship in the year 2017.