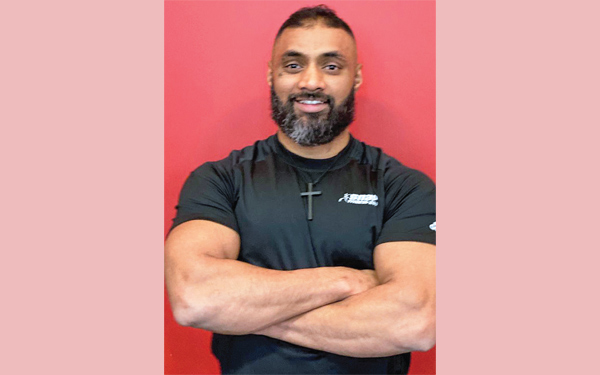 To engage in the game of rugby one must maintain a good physique including endurance and stamina. Some players who chose their career with weightlifting and Body Building later turn out to be quality rugby players due to their fitness and the body structure. Dilip Selvam was one of them who was very particular about his body shape and decided to compete in the game of rugby while representing another sporting discipline.

Dilip Selvam is a former ruggerite who lives in Melbourne Australia. He comes from a humble family of three brothers Dinesh, Dishan, John and a sister Angela. He was born in 1981 His mother was late Selvarani Rasiah and father is Sebastian Selvam. He had the support from his parents to excel in the field of rugby and fitness. Sports have played a key role in his life. His main inspiration to play rugby from a very young age was his brother Dinesh who is the Business Development Manager at George Steuart Health, who played a pivotal role in teaching the basics of rugby. Then he was hooked to rugby at school which led to a professional career proudly representing the country at the national level.

His father was a businessman and an Olympic weightlifter. He was driven to the field of fitness at the age of five by his father and his uncle Gnanapragasam who was also an Olympic Weightlifter and a weightlifting coach at YMCA Kandy. He was one of the grandchildren of the famous late Mahesh Sabaratnam the Triple International who represented Sri Lanka in Rugby, Boxing and Weightlifting.

Dilip was a product of Trinity College, Kandy, who secured a permanent place in the college team in all age categories where he represented the school from under-13 to first XV as scrum-half. He played in the first XV team from 1998 to 2000 as a second year coloursman. He was not only a rugby player, but was obsessed with fitness training from a young age. At school he competed in Weightlifting and Body Building as well.

After leaving school he opted to engage in club rugby and joined his home town team Kandy Sports Club in 2000 to play in the inter club sevens tournament and then the fifteen aside. He played fifteen side rugby as a scrum half in his first two years at Kandy SC. Then his Coach George Simpkin made a big change in his rugby career, changing his position to play as an open side flanker for his fearless tackling, turn overs, fitness and speed in breakdowns. He continued playing for Kandy SC for over a decade from 2000 to 2010. During his tenure they became triple champions, having the best supporters and fans from his hometown.

He got injured in the 2010 Clifford Cup semi-final practices and had to leave Nittawela. He later joined Havelock Sports Club in 2011 and played in the Clifford Cup in 2012 and in 2013 season for Up-Country Lions and in 2014 for CH and FC. He was a regular member of the National Sevens and XV-a-side teams throughout his rugby career.

His first National appearance was in 2003 at the Dubai International Sevens and South Africa International sevens, coached by Chandrishan Perera. He played as a flanker in XV-a-side and prop and hooker in sevens rugby. Apart from playing Rugby he was a IRB level-2 certified coach who played a big role in Trinity College Rugby in 2011.

The Milo Knock trophy winning team was led by Murad Ramzeen, where Dilip worked as a trainer and assistant forwards coach. He left Sri Lanka ending his rugby career in 2015 to Melbourne with his wife for her higher studies. He is now a permanent resident and has set up his own personal training business at Snap Fitness South Yarra and online coaching, improving people’s fitness and helping them to step up and achieve their fitness goals. He never opted to quit his sporting career after moving to Australia and selected another sport to prove his fitness and strength.

He was the only and first Sri Lankan to compete in International Kettlebell sports and had the privilege of representing the Australian Kettlebell Team in IGSF Kettlebell Sport World Championship.

He also went on to win several gold medals by performing 412 repetitions in 30 minutes with 20KG kettle bell in the event of One Arm Long Cycle half a marathon at the Arnold classic 2018. He has bagged several awards including Gold Medals in the same sports up to 2019.

His sporting career does not end even though he has retired from the rugby arena. He still lives like a sportsman, trains like an athlete and keeps fitness at the highest level at the age of 40. He is happily married to Nadee Siriwardena and blessed with a baby girl Tahlia. He is thankful to his dad for teaching him the squats, clean and jerk at the age of five years where he loved rugby and weight training. He is incredibly blessed to make a living out of what he loves the most and to keep fit at this age.

He also thanked his wife who stood as a pillar of strength in his sports career and fitness life who still supports him to achieve his goals .

He would like to extend his sincere gratitude to his brother Dinesh who taught him rugby at the age of seven and took him for practice till high school. His under-17 coach Bimal Fernando who bought him the first pair of boots to start his rugby career.

Also his employer Sampath Bank Plc where he was employed for 14-years, which supported him when he was injured in 2010 to undergo surgery and to come back stronger. Nowadays he misses the game of rugby a lot and intends that one day he could share his knowledge and experience in training some young rugby players.