The Sri Lankan Community residing in Adelaide, South Australia are involved in all kinds of sports mostly cricket and the Old Anandians and Old Nalandians have organized a ‘Big Match’ between them which is held annually. They have already played four matches and these matches were organized by an Old Nalandian, Nayan Perera, who is residing in Adelaide, for more than 15 years and involved in so many Welfare Organisations. 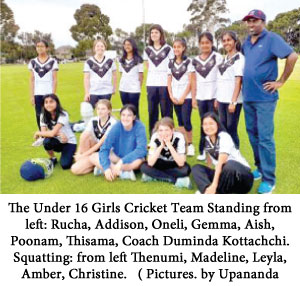 For the Sri Lankan boys residing there they have arranged two cricket teams inclusive of Under 10 and Under 12 Cricketers trained by two Qualified Coaches to be entered for the Multinational Festival of Junior Cricket called Junior Cricket World Cup organized by the Fitzroy Community Club which was held on the 11th of October, 2020 at the Adelaide Oval.

The relevant authorities have organized Junior Cricket teams from Sri Lanka, Pakistan, Nepal and Australian Aboriginals residing in Adelaide, and they have participated in this Cricket Tournament which is limited to 10 overs.