Schools are the lifeblood of any community! Education is the bedrock of our contentment as a society, as an economy and as a people. It has often been stated that our greatest resource is our people. We have nurtured that resource and enriched its potential by the professionalism, dedication, and generosity of generations of teachers in all levels of our educational system. The British colonial period lasted from 1796 to 1948 and shaped the development of education in Sri Lanka. But it was only after the British took over that formal primary and secondary education was actualized with the establishment of schools by British missionaries.

A standard system of government schools was established by the British based on the recommendations of the Colebrooke-Cameron Commission in 1833. This is regarded as the beginning of the government’s schooling system in the island. It started with the establishment of the Royal College in Colombo (formerly the Colombo Academy) in 1835. St. Anthony’s College Kandy was founded in 1854, same year as St. Sebastian’s College Moratuwa. Other schools to be established in the 19th Century are St. Benedict’s College Kotahena in 1865, St. Joseph’s College Trincomalee in 1867, St. Anne’s College Kurunegala in 1867, Richmond College Galle in 1876.

Fr. Le Goc envisioned an overflow of students and decided to set up a second educational institution in the south of the city (Colombo). This gave way to St. Joseph’s College South that was established in January 1922 on the land side of Galle Road, Bambalapitiya bordering the Wellawatta canal. The inauguration took place on Wednesday 18 January 1922 as 204 students were admitted on that day and by the end of the year the number had risen to 268. Fr. Le Goc overlooked the administration of the school until 1927. This school was re-branded and named St. Peter’s College in 1927. The name change was documented on April 8, 1927, vide Gazette Notification No.7575. Rev. Fr. D.J. Nicholas Perera was appointed the first Rector of the newly established school in 1927, a role he performed with distinction until 1943 for 16 years.

This writer joined St. Peter’s College thirty-four years later in 1956, in the 6th Standard that was called Prelim A. My first school was St. Anne’s College Kurunegala from Kindergarten to 5th Standard in the Primary School. The transition from my hometown to Colombo was smooth and I was housed at my aunt’s at Bambalapitiya Flats. Rev. Fr. Arthur Fernando was appointed the 3rd Rector of the school having taken over from Rev. Fr. Basil Wiratunga (1943-1956). Mr. Primson Jayasekara, a calm and collected individual was my class master. He had two celebrated musical sons – Perrin & Gerrinus who performed as the famous “Jay Brothers”.  The duo, quite popular at the time had passed out as doctors from the Colombo Medical College. Sunil Liyanage from Negombo, Chandra Fernando from Matara and Ranjit Wijesinghe from Galle joined me from outstation towns who joined St. Peter’s in 1956. 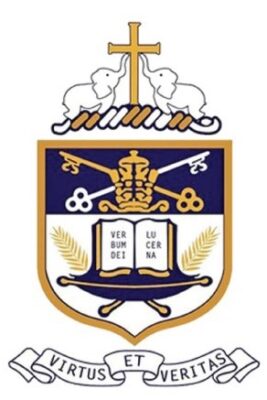 St. Peter’s College, Colombo, is one of the largest Catholic schools in the country will celebrate 100 years on January 18, 2022. It will mark an important milestone in the College calendar, as the boys in blue, white and gold cherish and celebrate the completion of the century of their alma mater. Today the College has proven itself to become one of the largest Catholic schools in the country with almost 4,500 students on roll while seven priests, 215 teachers and 100 clerical and support staff serve the College. Producing a fully-fledged individual has always been the vision and mission of the College, reiterated the current Rector – Fr. Rohitha Rodrigo while stressing, “Every Peterite has to strive to become a versatile person and upon leaving College be able to excel in any field he chooses to pursue.”

The Motto of the school is Virtus Et Veritas (Latin). The sister school is Holy Family Convent. St. Peter’s College is centrally located on the landside of Galle Road. Commuting to the school is easy by bus or train. The cross section of students who walk through the hallowed hallways of the school comes from Bambalapitiya, Kollupitiya, Thimbirigasyaya, Nugegoda, Kirillapona, Pamankada, Wellawatta, Dehiwala and Mt. Lavinia. Neighbouring schools’ in Bambalapitiya are St. Paul’s Milagiriya, Holy Family Convent, Visakha Vidyalaya, and Hindu College Colombo. To the south in Wellawatta, there are two girls’ schools – St. Clare’s College and St. Lawrence’s Convent. 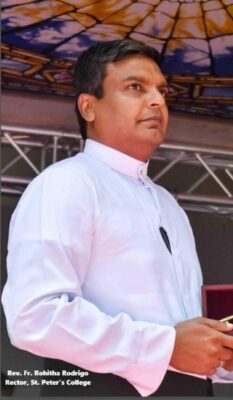 The ninety-nine-year period of St. Peters’ College, beginning 1922, could conveniently be divided into six distinct eras. Firstly, The beginnings dominated by Very Rev. Fr. Maurice Le Goc; Secondly the era of the First Rector, Very Rev. Fr. D. J. Nicholas Perera (1922 to 1943) who laid a solid foundation, a period which saw St. Peter’s making a big impact on the local educational scene in double quick time; Thirdly, the aftermath of World War II and the Rectorship of Very Rev. Fr. Basil A. Wiratunga O.M.I. from 1943 to 1955; Fourthly, an era spanning 21 years which take in the Rectorships of five Rectors all of whom had to grapple with financial constraints brought about by the daring and bold decision not to be vested with the State, but to function as a ‘Non fee levying private school’ – Rev. Fr. Arthur Nicholas Fernando (1956 to 1963), Rev. Fr. Mervyn Weerakkody (1963 to 1971), Rev. Fr. Theodore E. Peiris O.M.I. (1971 to 1975), Rev. Fr. Claver Perera (1975 to 1976), and Rev. Fr. Francis Madiwela (1976 to 1977); Fifthly, the enlightening and brilliant Rectorship of Rev. Fr. Joe E. Wickramasinghe (1978 to 1994) an era which could well be called ‘The Renaissance in Peterite History’; this was followed by the eleven year old Rectorship of Rev. Fr. Felician Perera (1994-2005) on whose young shoulders fell the responsibility of guiding St. Peter’s into the early 21st Century, bringing us up to the 21st Century – the era of Fr. Travis Gabriel (2005-2014), the 10th Rector of St. Peter’s College. Then came the builder of the century and the 11th Rector, Rev. Fr. Trevor Martin (2014-2019). His tenure in office was marked with infrastructure development projects. This was the beginning of a chain of buildings and innovations to St. Peter’s College. As he started the office renovations, he dreamt of having a suitable hall that could accommodate three hundred people. Fr. Trevor got the architects and engineers for a meeting and changed the whole foundation and came up with a plan for a three-storied building, finding space for a computer section on the first floor. Rev. Fr. Rohitha Rodrigo, A proud old boy of St. Peter’s College, has been appointed as the 12th Rector of St. Peter’s College. He served earlier as the Principal of the Primary School at St. Peter’s and later as the Rector of St. Jude’s College Negombo.  Under his guidance our alma mater will reach new heights.

The quality of education one receives at. St. Peter’s College is exceptional. For science students the laboratories are well equipped. The school hires first-class teachers’ who impart their knowledge to the students with ease and clarity. Sports has always been its forte going back in time to the early 30s when the cricket, rugby football and athletic teams excelled at inter-school championships. Clive Inman is perhaps the most decorated cricketer produced by the school. His innings of 204 (retired hurt) at the Josephian-Peterite big match in 1954 remains the highest individual score of the 86-year-old history of the series that began in 1933. Inman represented All-Ceylon in cricket and emigrated to England where he played for Leicestershire County Cricket Club, one of the first-class clubs in the domestic cricket structure of England and Wales. Rohan Buultjens (St. Peter’s) remains the only cricketer in the series to score two centuries in the big match in 1979.

Other notable cricketers who earned their national caps are Dr. H.I.K. Fernando, P.A.T. Kelly, Tony Opatha, David Heyn, Rohan Buultjens, Roy Dias, Rumesh Ratnayake, Vinothen John, Amal Silva, Russel Arnold, Kaushal Lokuarachchi, Malinda Warnapura, and Angelo Perera. Santhush Gunathilake, 2018 Peterite skipper is part of the current squad and is likely to represent Sri Lanka shortly. Gunathilake holds the record for the highest score by a Peterite ever when he scored 252 runs against Ananda College in 2019. Gunathilaka’s awesome score of 252 runs surpassed the previous record held by Angelo Perera – 239-runs in 2009 against Nalanda College. The other double-century scores on record for the Peterites are that of 1963 skipper Tyrone Le Mercier’s unbeaten 235 against St. Anthony’s College Kandy in 1962.

St. Peter’s also excelled in Rugby Football, Athletics, Basketball besides cricket. Due to lack of space, details of these sports will be covered in a sequel to this write-up. All said and done, this writer is proud to have had his high-school education at St. Peter’s College.  A great school that prepares you well for your adult life.