The Nadesalingams were visited by the Department of Home Affairs team at their Biloela home today.(Twitter)

The Tamil family at the centre of a four-year immigration battle have received permanent visas, ending a community-driven campaign against their deportation.

Priya Nadaraja, Nades Murugappan and their daughters Kopika and Tharnicaa have been living in Biloela in regional Queensland since June, after the new Labor government granted them bridging visas.

The family previously spent four years in immigration detention after Priya’s visa expired in 2018 and both she and her husband’s claims for refugee status were rejected by the Coalition.

The ABC has confirmed the family was visited by the Department of Home Affairs team at their Biloela home today and told they had been granted permanent visas.

Family friend and “Home to Bilo” campaigner Angela Fredericks was with the family when officials visited.

“They let us know the news the minister was deciding to intervene and use his powers to grant all four family members permanent visas,” Ms Fredericks said.

“It was a very tense day as we knew they were coming but had no idea what for.

“So when they said the words ‘permanent’, there were just immediate tears and just such excitement and jubilation.

“To get to say to the girls ‘you get to stay in Australia forever’, there was just a big yay from Kopika.” “This government made a commitment before the election that, if elected, we would allow the family to return to Biloela and resolve the family’s immigration status,” he said.

“Today, the government has delivered on that promise.

“I extend my best wishes to the Nadesalingam family.”

Shadow Home Affairs Minister Karen Andrews said the decision to give the family a permanent visa undermined the immigration policies of past Coalition governments.

“Actions have consequences and this sets a high-profile precedent,” she said.

“It undermines the policy that if you come here illegally you will never settle in Australia.” But Mr Giles said the government would continue to intercept and return any unauthorised vessels seeking to reach Australia.

“For anyone who attempts to migrate via an unauthorised boat to Australia – you will be caught, returned or sent to a regional processing country,” he said.

“I do not want people to die in a boat on a journey when there is zero chance of settling in Australia.

“This has not changed since the last government. We are not considering changing this policy.”

The family was taken into immigration detention in 2018 after Priya’s bridging visa expired.

They were found by the Coalition government not to meet Australia’s refugee requirements and were kept in detention in Melbourne and Christmas Island, and in community detention in Perth.

Prior to the election, former prime minister Scott Morrison said there was “no protection owed” to the family as claims for protection had been rejected.

Soon after the election, the Labor government intervened in the case, allowing the family to return to Biloela on bridging visas.

It was the first time the youngest daughter Tharnicaa had been granted a visa.

They were welcomed home with a weekend of celebrations in June, including a special ceremony at a multicultural festival, and a birthday celebration in the park for Tharnicaa, her first outside of immigration detention. 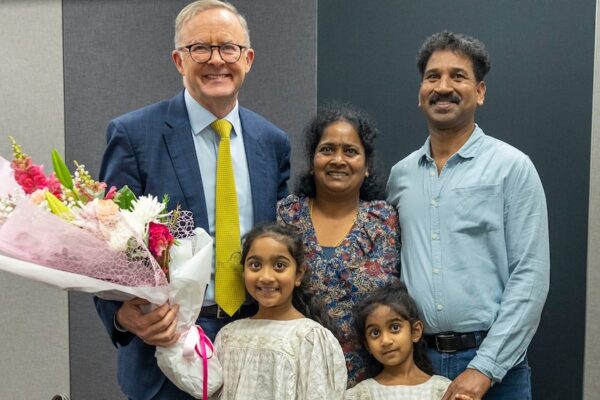 The Nadesalingam family met Prime Minister Anthony Albanese in June after their return to Queensland.(Twitter: @alboMP)

They also met Prime Minister Anthony Albanese on June 15 on the sidelines of a Federal Cabinet meeting in Gladstone.

“It really has been in front of the Minister for quite a considerable period [but] they now have a pathway to citizenship,” Ms Ford told ABC Radio National.

“This was a unique case in the fact that the family had spent such a long period in detention and in particular that there were two children detained.

“There are many cases within the cohort of people that arrive by boat that also need ministerial intervention.”

Ms Fredericks said the immigration uncertainty began when the family came to Australia for the first time, over a decade ago.

“This has been a 10-year battle for Priya and Nades,” she said.

“The peace of mind that that gives someone, knowing that they are no longer on temporary or bridging visas, but to actually know you are here permanently and no-one can take that away from you, it’s just such a beautiful gift.”

She said the family would be celebrating tonight with a range of curries.

“People power won and this people power shows that the Australian population are ready for a new conversation about refugees,” Ms Fredericks said.

“And we’re ready to actually be united as one.”