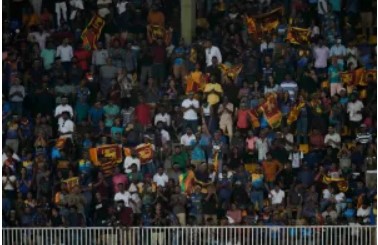 The fourth ODI held at Khettarama on the June, as we know, was magnificent match …and a cliff-hanger. With the benefit of a night’s sleep, I can venture on a more considered commentary.

Cricket is a great leveller is it not!! The skipper Dasun Shanaka had jolted the world with a heroic innings of the Maxwell variety in the second ODI at Palleakele. But, here, at Khettarama in the 4th ODI, he proved to be a lemon: running between the wickets like a novice …. with the first run taken in a dawdling manner, he was run-out at a crucial time.

Then, with a bowler Matthew Kuhnemann at No 10 facing the 50th over and a target of 18 more runs to make, Shanaka chose to take the ball himself rather than opting for Karunaratne, Vandersay or Wellalage. A toss-up that choice … but one that was to Kuhnemann’s liking: in a brave and inventive manner Kuhnemann carved several boundary hits and had only another four to make for a tie in the sixth ball. He failed this time, but it was final over that was near disaster for Sri Lanka.

So, it was touch and go at that moment. Shanaka nearly had egg smearing his face.

Sri Lanka had numerous heroes this day, not just Charith Asalanka — who was adjudicated “Man of the Match”.

The first HERO in my queue of heroes was/is Dhananjaya de Silva whom I would have chosen as Man of the Match because of his critical bowling work which brought him 2 wkts for 39 runs at a rate of 3.90 (the best rate in the side) to backup his 60 runs in 61 balls at a stage when the side was facing disaster.

The second HERO was Charith Asalanka, centurion and a supporting bowler,

Third, perhaps unnoticed, was Niroshan Dickwella whose stumping of David Warner –then on 99 runs mind you – off Dhananjay’s bowling was not only magnificent, but out of this world for speed and efficiency …. And thereby an act that buoyed the whole team at a critical juncture.

Of course, it takes more than three to win a match and Jeffrey Vandersay, Wanindu Hasaranga and Mahesh Theekshana had critical inputs as well.

All in all, it was a pulsating match. The Aussies were party to this impact as well …. None more so than the previously unsung KUHNEMANN who unleashed inventive strokes in dire circumstances.

A cliff-hanger it was.