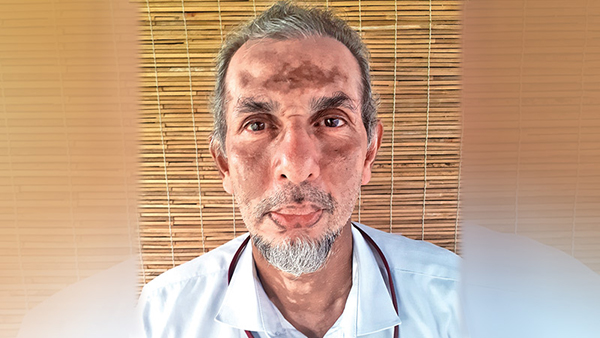 Sri Lanka has produced several sportsmen who excelled at International level bringing honour to the country. One of them is Uvaisul Karnain, a double International who represented the country in hockey and cricket in the 1980’s. ‘Daily News’ spoke to him recently for an update on his sporting career.

The now 58-year-old Uvaisul Karnain is an old boy of Isipathana College, Colombo. He hails from a sports loving family. All his six brothers played Cricket and Hockey for school and Club Burgher Recreation Club (BRC). He was very enthusiastic to play rugby for his school but his parents objected and advised him to take up any other sport except rugby. Better known as “Kara” in sporting circles, he then opted to get into hockey and cricket at school in1975 and 1977 respectively.

He started playing both games from junior level and went on to play in the first eleven cricket team as well as the senior hockey team. Kara recalled his best performance was against St. Joseph’s College, Colombo in 1981 at Darley Road. As a prolific all-rounder he captured five Josephian wickets for 28 runs to skittle them out for 130 runs. He then went on to hammer a swashbuckling unbeaten 154 inclusive of seven towering sixes, one of which landed in the Sri Lanka Freedom Party Office across the road. Then in the second innings he took three wickets. The team comprised of some top players like Harsha Deepal, Oscar Wanigasekera, Dushantha Peiris and Udaya Rajan, while the Josephians had Ashley de Silva, Hiran Cooray, Ravi de Silva and Hiran Cabraal to name a few.

Apart from his cricketing career, he stole the limelight in hockey too. He went on to captain both sports in 1981 during his final year in college. While still a schoolboy he was chosen to represent the National Hockey team at the inaugural Asia Cup in Karachi, Pakistan under Sarath Wimalasinghe’s captaincy. He then donned the BRC jersey from 1975 to 1995 in hockey for which they honoured him with a life membership. He was an active member of the National hockey team for about a decade.

He concentrated mostly on cricket and represented the Colts Cricket Club as a school boy. He recalled a memorable incident when he was 18 years old and playing for Colts. They had the challenging task of winning their final match against Moratuwa Sports Club at home to qualify for the final round of the Premier Tournament. He struck a match-winning innings of 77 runs against a top-class bowling attack, which enabled them to qualify for the final round..

The late Mike Chanmugam was his first cricket coach, both at school as well as at the club, who was instrumental in making him a top player. He represented Colts from 1977 to 1982 and then shifted to NCC to play the under-25 tournament. From there he became the cynosure of all

eyes, as the national selectors included him in the squad selected to tour Pakistan with the under-25 side in 1983/84. Soon after his return his long-standing dream of playing for the country became a reality, as he was chosen to play against New Zealand, who were on a tour of Sri Lanka. He made his Sri Lanka debut with Aravinda de Silva and went on to bag the Man of the Match award by scoring 28 runs in 26 balls while claiming five wickets, which was the only win Sri Lanka was able to register under Duleep Mendis’ captaincy in that series.

He has played 19 one day internationals for the country and claimed over 25 wickets in his short stint with the national team. He has another interesting history of holding on to two catches while being the twelfth man.

In 1994 he retired from all forms of cricket and went on to engage himself in coaching in 1997/8 season. He started his stint with Moors Sports Club for two to three years and was contracted by the Sri Lanka Cricket Board as Western Province district coach. From there he coached Tamil Union, BRC and Bloomfield in the Premier Tournament.

He was then contracted as a match referee to serve in the domestic tournaments by SLC, for which he is grateful to Graham Labrooy and umpire K.T. Francis for motivating him to accept this offer. He also holds a level two coaching certificate with SLC and has many more certificates in the field of coaching granted by other cricketing playing nations.

He served as a member of the women’s selection committee and is the manager of the indoor nets at the Sri Lanka Cricket Foundation at present.