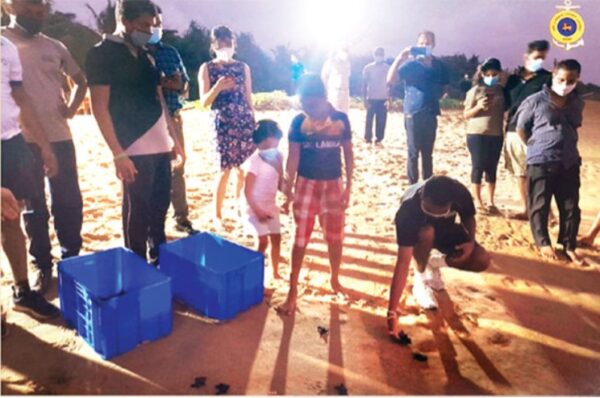 (The writer is a former member of the Navy Special Boats Squadron, the elite naval commando unit.)

The Navy deployed small groups on the enemy-held beaches for reconnaissance during the war against the LTTE. These highly trained four-member groups of the Special Boats Squadron (SBS) personnel infiltrated the LTTE-held terrain under cover of darkness, risking their lives. They stayed there either for reconnaissance or setting up caches of ammunition and other supplies needed for future operations in the areas concerned. 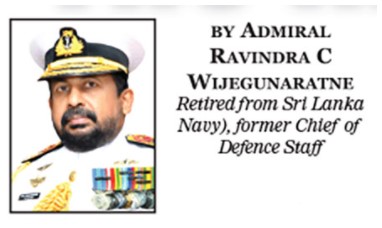 When dangerous operations were conducted behind enemy lines, I, as the CO SBS, committing my best men for such missions, confined myself to a cell of sorts; I stayed in operations room with a secure communication set, eating the same rations as my boys—on some days only chocolate—until they accomplished their missions and returned to base safely. Then, I would share cooked meals (mostly rice, chicken curry, dhal curry and pol sambol) with the brave men, who have helped make this country safe for everyone.

I am keeping a vigil, again, these days. Not because naval commandos have been deployed on a dangerous mission, but because my friend, Mrs Willy, is in apparent danger. Unlike my SBS boys whose movements I could track, I do not know where Mrs. Willy is—whether she is in the Andaman-Nicobar island chain, 690 nautical miles East of Sri Lanka or in the Maldivian archipelago, 425 nautical miles West of us. Further, I have failed to meet her in her ‘labour room’ under a huge Nuga tree in the Turtle Bay, Coral Cove, this year. I am worried of your safety, my dear friend!

There has been a lot of bad news these days; a large number of dead marine creatures such as dolphins and turtles have washed up on our beaches. We now know for sure these tragic deaths are due to toxic materials released from the ill-fated MV X-Press Pearl.

First, the sea turtle carcasses found on our Western and Southern beaches were small. Gradually, big turtles began to die. Most alarming was that on 30 June, a huge sea turtle (Leatherback) carcass was found on the Panadura beach. All these carcasses bear evidence of very painful deaths. 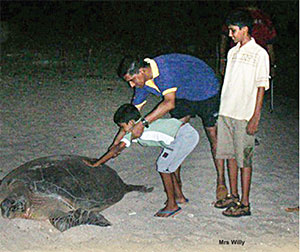 Leatherback sea turtles are the largest among turtles and capable of swimming long distances and diving very deep. The one found on the Panadura beach must be at least 100 years old. It was sad to see the carcass of such huge sea turtle, at her prime egg-laying age.

Do you know that the longest recorded journey of leatherback sea turtle by satellite tracking is 12,774 miles (20,558 km) from Indonesia to Oregon (US Pacific North Western region). Satellite tracking of the fully-grown Green sea turtle has shown that it swims 4,000 km continuously without a break even for eating!

I am worried about my friend, who has visited Trincomalee Naval Base, Coral Cove, Turtle bay annually to lay eggs for the last 40 years.

Human interaction with a sea turtle for 40 years is very long time, probably one of the longest in the world. Please, go to the archives of The Island newspaper e-paper dated 18 June 2020 and read about this huge green sea turtle, fondly known as Mrs Willy.

Mrs. Willy lays 30-35 eggs in Turtle bay, Coral Cove, Trincomalee every year during May- July season. That means she has produced more than 1,200 children! What a great lady! She is striving to prevent her species from being driven to extinction! 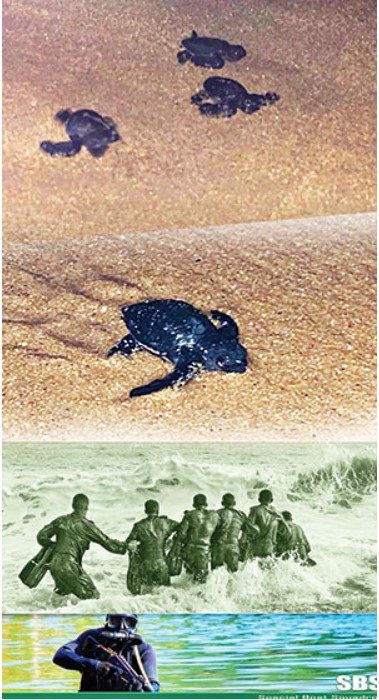 She knows me well. When I talk to her from a distance, and walk towards her after she finishes laying eggs, she stops her crawl towards sea and allows me to touch her. I see tears in her eyes, which may be due to the pain of laying eggs.

My son and other children of naval personnel know her well and have even touched her since they were very young. They keep asking me whether Mrs Willy is safe. I tell them she is, but I have my doubts.

Sri Lanka Coast Guard (SLCG) protects sea turtles. It protects their breeding sites and eggs and ensure that baby sea turtles find their way to the sea safely. It maintains records of sea turtles it releases into the sea. In 2017, it released 5,440 baby sea turtles from Wellawatta, Hikkaduwa and Mirissa. From February to June, mother sea turtles come even to Wellawatte and Galle Face beaches to lay their eggs. Those detected by the SLCG beach patrols are protected day and night for next 60-65 days until they are hatched and babies crawl into sea.

These hatchlings do not include those born at Turtle bay, Coral Cove, Naval Base, Trincomalee.

I am keeping my vigil for my dear friend. I cannot cry for you, dear Mrs Willy. I have seen enough and more death and devastation during the war years without shedding tears. Please, come back to Turtle Bay one of these days, my dear friend. All of us are awaiting your arrival, and you can rest assured that you will receive a rousing welcome.