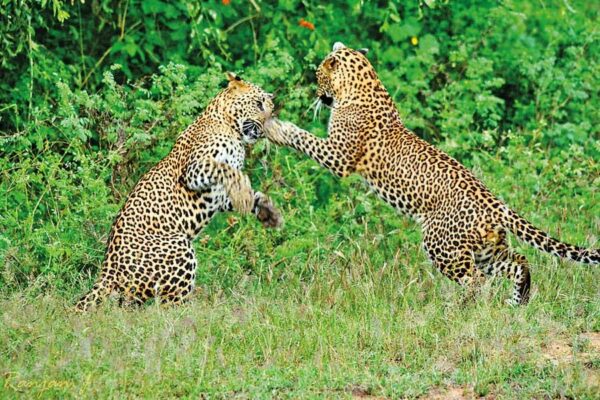 As an indicator, umbrella and keystone species, the Leopard helps fulfill critical ecological roles in the ecosystem (Images of leopards courtesy WNPS)
The Sri Lankan leopard is an iconic species that adds more vibrance to the ecological diversity in the country. It plays many roles in the ecosystem apart from posing for a photograph once in a while. However, upon realising the growing threat to leopards as a result of snares, suspect body part trafficking and the bushmeat trade, the Wildlife and Nature Protection Society (WNPS) declared August 1 as the Sri Lanka Leopard Day in 2021. The date coincides with a thesis by Dr. Sriyanie Miththapala which confirmed the Panthera pardus kotiya as an endemic sub species. Whilst paying attention to the species 24/7 due to the threat levels faced by it, the objective of declaring a national leopard day is to draw special attention to the demands of the Sri Lankan Leopard. Extremely dangerous threats have affected this iconic species within and outside protected areas for the past five years. 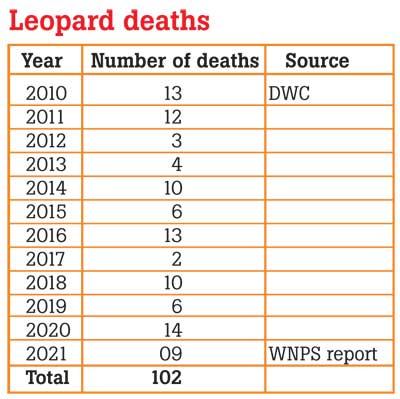 “The leopard, Sri Lanka’s apex carnivore, plays extremely important roles in both the ecology of the island and the long-term conservation of Sri Lanka’s biodiversity,” opined Dr. Andrew Kittle and Anjali Watson, Founding Trustees at the Wilderness and Wildlife Conservation Trust.
“Sitting at the top of the food chain, there is a strong possibility that the leopard is a “keystone” species in Sri Lanka – meaning that its presence within ecosystems here is far more valuable to the effective functioning of those systems than its r elatively modest population numbers would suggest. Remove it from those systems and they may teeter and crash, or at least become less productive,” said Dr. Kittle and Watson. They further said that its role in the conservation of biodiversity stems from being both a “flagship” and “umbrella” species. “As a breathtakingly beautiful, charismatic large carnivore, the leopard is widely admired and can act as a “flagship” which can rally conservation efforts – and garner often elusive conservation support – which can benefit not just the leopard but a wider array of species. Due to the fact that leopards are extremely adaptable, living in all habitat types in Sri Lanka, and are also wide-ranging and territorial (a factor that ensures even more space is required for a viable population), they are very useful “umbrella” species. This means that ensuring the long-term protection of a robust leopard population in Sri Lanka ensures, by default, the conservation of a host of smaller and more spatially restricted species that fall under its ‘ecological umbrella’.
“WWCT utilises these aspects to focus on landscape-level conservation of the leopard and wider biodiversity, by identifying leopard refugia and movement corridors which link larger forested and/or protected areas in the Central Highlands as well as in other parts of the leopard’s island-wide range. Once identified, these vital links become the focus of collaborative conservation efforts to ensure their continued use.
“Sri Lanka benefits from the presence of the leopard on its forest trails and mountain slopes – ecologically through its role in the system, economically through the revenue that it garners as a star attraction in National Parks, and aesthetically, marked by the quickening of the pulse and sharp intake of breath that so often characterises a glimpse of this graceful, elusive predator,” they added.
Economic crisis and impact on wildlife conservation
“Leopards have been a big component of ecotourism for the past 15 years or so,” opined environmentalist and former WNPS President Rukshan Jayawardene. “Leopard-centric tourism could generate much money but then again there’s a downside as it may not be ecologically sensitive to the animal’s wellbeing. Therefore the Department of Wildlife Conservation (DWC) has to be more sophisticated and get private hotel operations to concentrate on this aspect while having statistics of how many tourists visit Sri Lanka to photograph leopards and the income generated through these activities.
“However the prevailing economic crisis will have a greater toll on all natural resources. The bushmeat trade will flourish. The shrinking of the economy will have a dual impact on the conservation of wildlife. If the bushmeat trade grows, it would reduce food for leopards and the economic value for leopard skin, teeth and other body parts will also increase,” Jayawardene said.
He further said that since people are burdened with fertiliser shortages and land availability problems the situation will worsen before it gets better. “With other state forests coming under the purview of government agents, nobody really knows how these lands are being given away. Therefore nothing is predictable at the moment,” said Jayawardene.

Leopards – an important revenue generator
“The Sri Lankan Leopard (Panthera pardus kotiya) is a subspecies unique to the country, the apex predator on the island,” said DWC Director General M. G. C. Sooriyabandara. “As an indicator, umbrella and keystone species, the Leopard helps fulfill critical ecological roles in the ecosystem. The Leopard attracts visitors to our national parks and thus is an important revenue generator.
“However, the Leopard is listed in the threatened category in the National Red List (2012) due to the ongoing challenges the animal faces because of conflict with humans and loss of suitable habitat. We continue to conduct many awareness programmes on the use of snares and their impact on wildlife since educating the public is very important to protect the Leopard, especially in mountainous areas.
“The declaration of Sri Lanka Leopard Day in 2021, in collaboration with the Wildlife and Nature Protection Society (WNPS), is something the Department of Wildlife Conservation is very proud of, as it helps celebrate this iconic animal whilst continuing to help raise awareness on the continuing threats faced by the species,”
Sooriyabandara said.