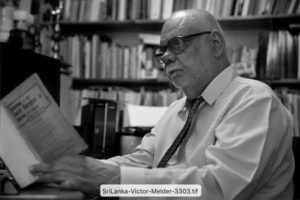 Sri Lanka Tourism Development Authority (SLTDA) says the number of tourists coming to Sri Lanka has decreased by 60 percent in last month. Director General of SLTDA Dhammika Wijesinghe said this situation has arisen in view of the crisis atmosphere in the country. According to SLTDA, 106,500 tourists arrived in the island in March 2022 and the tourist arrivals have decreased to 32,856 in the month of June Tourism Development Authority Director General Dhammika Wijesinghe said. July and August are the two months when most tourists visit the island. During those two months, the tourists mostly visit the eastern part of the country. Apart from that more tourists tend to visit Kandy area in August. The Director General said in view of the current situation, about 40 percent of the pre-bookings of tourist hotels in Sri Lanka have been canceled by foreign tourists. (Colombo Page, 3.6.2022)
Minister of Agriculture, Wildlife and Forest Resources Conservation, Mahinda Amaraweera has told the Cost-of -Living Committee that the Government will allocate Rs. 200 billion to provide relief for 3.2 million low-income families countrywide. The Cost-of-Living Committee met under the chairmanship of Prime Minister Ranil Wickremesinghe on Thursday, June 30. Rs. 7,500 – Rs 10,000 will be allocated per family under this program. Minister Amaraweera said that the Government had decided to take this step to help families which are losing their sources of income, the escalating prices of goods and the economic crisis in the country. The Minister discussed with all Governors and Secretaries via Zoom technology on Friday, July 1, where the Minister emphasised these points to review agriculture activities in all provinces of the country. The Cost-of-Living Committee also focused on providing nutritious meals to all children in remote areas. This program was proposed to protect the nutritional status of children, taking into account the loss or drop in the income of people engaged in certain types of jobs, he added. (Sunday Observer, 3.7.2022)

Workers’ remittances in the first have plunged by 51.6% to $ 1.6 billion from a year ago with June reflecting a sharper dip and reversing the rise in the previous month. In June inflows were $ 274.3 million, down 42.6% from $ 478.4 million a year ago. June performance also reversed the gain experienced in May to $ 304 million from $ 249 in April. Year-on-year dip had worsened in June as well as in May. When May inflows rose the Central Bank (CBSL) said it can mainly be attributed to the stability observed in the domestic foreign exchange market, along with the narrowing of the gap between the grey market and official exchange rate.
In that context analysts said that the dip in June is likely to add more pressure on the Government and the Central Bank which have been championing much needed inflows via official channels and cited the exchange rate being realistic and attractive to do so as opposed to what is offered in the grey market. After the rupee was allowed to float freely on 7 March, the country saw a jump in workers’ remittances to $ 318 million (highest year to date) but since then the inflows had been erratic (See chart).
The erratic performance is also disturbing since more people have taken up overseas employment.
CBSL said total departures for foreign employment were recorded at 22,194 in May contributed by the unskilled (7,453), skilled (6,947) and domestic aid (4,793) categories. Total departures for foreign employment during January-May 2022 were recorded at 113,757, compared to 26,450 in the corresponding period of the previous year and 117,952 in the year 2021.
Last year workers remittances dropped to a 10-year low of $ 5.5 billion, down by 23% from 2020.
During the year up to 22 July 2022, the Sri Lankan rupee depreciated against the dollar by 44.5%. Given the cross-currency exchange rate movements, the rupee depreciated against the Indian rupee by 40.4%, the Euro by 38.4%, the pound sterling by 37.4% and the Japanese yen by 33.7% during this period. (Daily Financial Times, 26.7.2022)
Rupee earnings from tea from January to June this year is Rs.164.2 billion. This translates into a 28 per cent increase in earnings from tea over corresponding earnings from tea during the same period last year, which amounted to Rs. 127 billion, an Asia Siyaka (AS) tea research report said. In US dollars, this achievement is approximately 577 million. Iraq was the number one destination for Sri Lanka tea exports, with quantities rising sharply by 46 per cent to 23.5 Mn Kgs. Iraq was followed by the UAE, Russia, Turkey, Azerbaijan, China, Germany and Chile. Reports did not include exports to the US. The US, as reported by us recently, was a major importer of tea from Argentina. Prices for the extra special grades were recorded to be upwards of Rs. 10,000. per kilo. These were small quantities but impacted the general trend that made a difference to the overall price structure. All broker reports were positive on price improvement per kilo, including John Keels Holdings and Forbes and Walker (FW) tea reports. However, it is of interest that the Tea Board has helped in the purchase of fertilizer by all tea producers. Low- cost funds were provided to purchase fertilizer for immediate application. Both smallholders and plantation companies were to benefit from this scheme which will help to improve tea production over the second half of production year 2022. Tea industry insiders commended the Tea Board for their funding action which is expected to impact the tea industry positively. A salutary result could be a boost in production, although quick-fire results could not be expected. Some tea holders informed us that their earnings, particularly from low grown holdings, had increased to Rs.300 per kilo for green leaf supplied to identified tea factory owners. However, tea broker reports indicated an overall shortfall in production this year. The total production recorded to date in 2022 is 141.2 million kgs, whereas in 2021, production for the same period was 167.1 million kgs.(Daily Island, 26.7.2022) The production of milk, eggs and poultry has declined seriously, the Ministry of Agriculture said. Accordingly, liquid milk production has decreased by 19.8 percent, egg production by 34.9 percent, and chicken meat production by 12.1 percent. The Ministry of Agriculture states that the lack of proper production of animal feed is the main cause of this situation. A senior official of the Ministry of Agriculture said that steps have been taken to give priority to maize production to overcome this situation. (Colombo Page, 29.7.2022)
The country’s merchandise exports have soared by 20% to $ 1.21 billion in June, whilst pushing to $ 6.41 billion in the first half of 2022, appearing to be the sole silver lining for Sri Lanka to avert partly a direr foreign exchange crisis. Previously, the highest for the month was recorded seven months ago with $ 1.16 billion in October 2021. As per provisional data released by the Export Development Board (EDB) yesterday, in the first half of 2022, merchandise exports exceeded the $ 6 billion mark, up by 12.4% year-on-year. June merchandise exports grew by 20% from a year earlier, driven by apparel and textiles, rubber-based and coconut-based products, food and beverages as well as seafood, proving the private sector›s resilience and becoming the only economic contributor generating a fixed inflow of much needed foreign exchange. EDB estimated services exports in the first half were at $ 1.34 billion, up by 45.72% from a year earlier. The services exports estimated by EDB consist of ICT/BPM, construction, financial services, and transport and logistics. In 2021, Sri Lanka’s total exports recorded $ 15.12 billion, up by 23% from 2020 sustaining its resilience, despite an unprecedented economic crisis. Last year’s performance comes second only to the $ 15.91 billion recorded in 2018. The Government is banking on exports, the only hope that can pull Sri Lanka out of the vicious cycle of the current account and put it back on a sound economic growth path. The Government has assured more support to exporters to reach a $ 20 billion target this year. (Daily Financial Times, 30.7.2022)